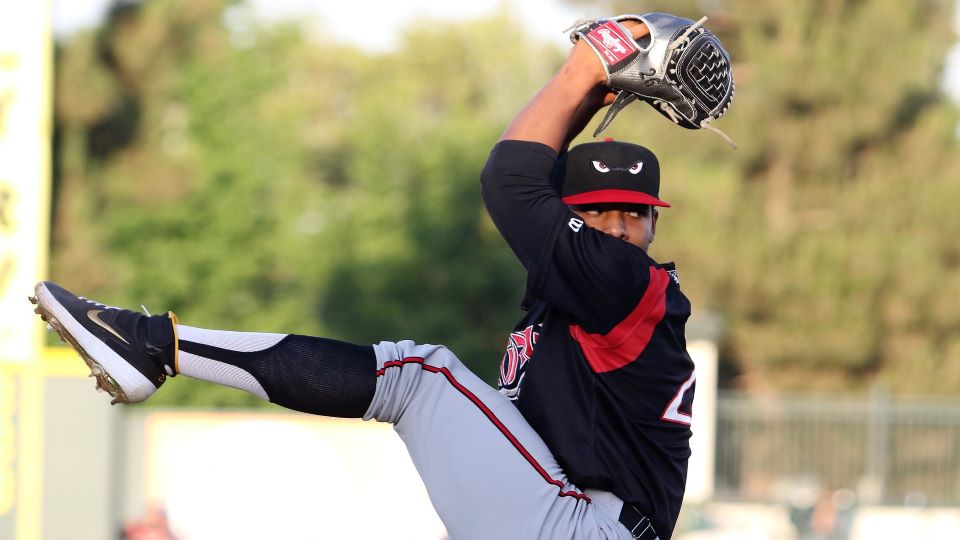 On July 7, Luis Patino put the baseball world on notice with his performance out of the bullpen at the All-Star Futures Game. Two weeks later, he's pitching like that showcase never ended.

The third-ranked Padres prospect matched the longest outing of his career by going 6 1/3 innings in Class A Advanced Lake Elsinore's 5-0 blanking of Visalia on Saturday night at The Diamond. He scattered five hits and two walks while striking out seven in his second consecutive start of at least six innings.

In his past two starts, MLB.com's No. 39 overall prospect has allowed one earned run while fanning 16 and issuing three walks. Storm pitching coach Pete Zamora believes the uptick in Patino's perfomance coincides with the the boost in confidence boost from that performance in Cleveland.

"He's always been a pretty confident kid, but when you face the best in the game and you do it at a high level on television, I think it soldified to him that he can do this," Zamora said. "It did nothing but lift his confidence. His confidence is always high, but it absolutely helped."

Patino (5-8) has long been on Padres fans' radar as the organization's top right-handed pitching prospect, but his stellar outing for the National League earlier this month put the 19-year-old in the national conversation. With the game tied in the bottom of the seventh, he entered with runners on the corners and one out and promptly struck out Rays No. 7 prospect Ronaldo Hernandez and top Twins prospect Royce Lewis to escape the jam. In the eighth, he retired the side in order, fanning top Angels prospect Jo Adell for the final out.

Since then, Patino has dominated in the California League. Against the Rawhide, he opened a 1-2-3 first inning with a four-pitch strikeout of D-backs No. 23 prospect Eduardo Diaz, then set the side down in order in the second.

In the third, Patino surrendered a leadoff double to Jancarlos Cintron, but center fielder Jeisson Rosario threw him out trying to extend it to a triple. The Colombia native struck out Max Murphy on a payoff pitch before enducing a groundout from Alex King.

More trouble came with two outs in the fifth after Patino allowed back-to-back singles to Cintron and Murphy. He uncorked a wild pitch, moving both runners to scoring position, and walked King to load the bases but got Diaz to fly to center.

After a nine-pitch sixth, Patino gave up two more singles and was lifted after his pitch count reached 101. He also worked 6 1/3 innings for Class A Fort Wayne on June 29, 2018.

A prized piece in baseball's top farm system, Patino has impressed since debuting in 2017. He opened the season in the California League after posting a 2.16 ERA over 83 1/3 innings in the Midwest League last year. He joins fellow Padres pitchers MacKenzie Gore (No. 3), Adrian Morejon (No. 48), Michel Baez (No. 70), Ryan Weathers (No. 71) and Logan Allen (No. 74) among MLB Pipeline's Top 100 Prospects.

Gore was promoted to Double-A Amarillo on July 9 and both Morejon and Baez joined the Padres over the weekend in Chicago. While the official roster move has not been made, Morejon has been announced as Sunday's starter in the series finale against the Cubs. Zamora also credited those promotions as providing further motivation for Patino.

"Knowing the competitor he is, it absolutely [lit a fire]," Zamora said. "When you see your buddies and the guys you grind with get where you want to be, absolutely. He's extremely happy for them and is now fighting to get to that spot as well."

Zamora said he also thinks Patino's turn is right around the corner.

"We tweaked some very minor [things] in his delivery and he's fixed those," he said. "We're seeing the success of those fixes. Early on, he struggled against left-handed hitters, but in his last four starts he's dominated left-handed hitters. He's doing everything we're asking of him.

"All the arrows are pointing up for him right now -- I don't think he's far at all. I think he can get Double-A hitters out right now, no problem."

Nick Kuzia got Patino out of trouble in the seventh and worked around a hit, a hit batter and a walk in the eighth before Seth Blair struck out two in a perfect ninth. The shutout was Lake Elsinore's league-leading 11th of the season.

Cintron went 3-for-4 for the Rawhide, who were shut out by Lake Elsinore for the second time this season.

Katie Woo is a contributor to MiLB.com. Follow her on Twitter href=<"twitter.com.katiejwoo">@katiejwoo. This story was not subject to the approval of the National Association of Professional Baseball Leagues or its clubs.