No. 25 prospect tosses 11 scoreless innings for Class A Augusta 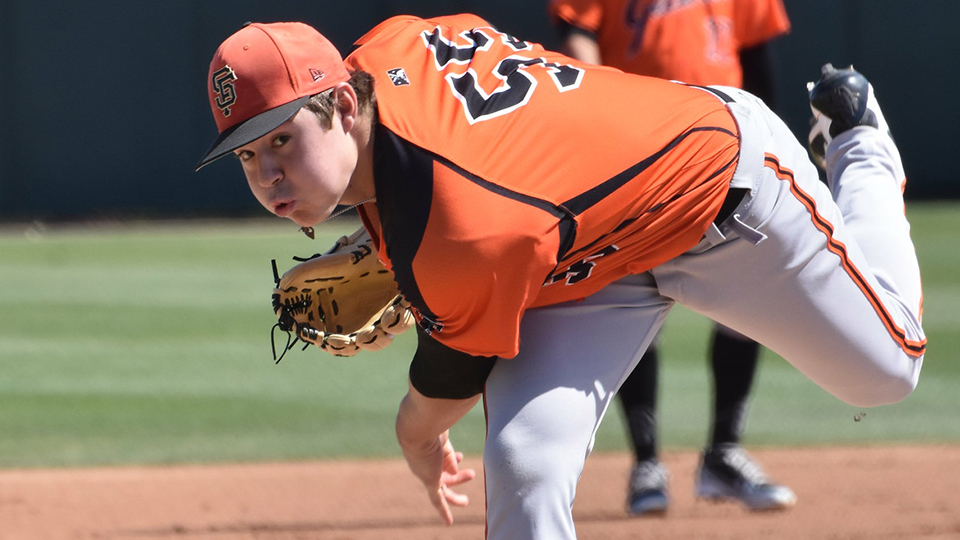 Seth Corry is tied for fourth in the South Atlantic League with 98 strikeouts through 70 innings. (Jerry Kime/MiLB.com)

Seth Corry has shown the stuff to grab attention in his first trip to full-season ball, and through the season's first three months, he's also seen positive results despite struggling with control at times. After showing marked improvement in that category his last two outings, Corry put it all together and enjoyed one of the best weeks in Minor League Baseball.

The Giants' No. 25 prospect has been named the South Atlantic League Pitcher of the Week after making a pair of scoreless starts for Class A Augusta, the league announced Monday. Corry struck out 12, walked only one and scattered four hits over 11 innings to earn the first Pitcher of the Week honor of his career.

The 20-year-old left-hander's first gem of the week came last Tuesday in Charleston as he blanked the RiverDogs for six innings, fanning five and allowing two hits and a walk. On Sunday, he posted five more zeros at home against Kannapolis, tying his season high with seven punchouts (achieved seven times) in an outing that was limited due to a two-hour rain delay.

But most importantly about the outing from the weekend was that it marked the first time all season Corry did not walk a batter. In fact, it was his first walkless appearance since July 15 last season in the Rookie-level Arizona League.

Through 17 starts (70 innings), the GreenJackets southpaw has put up otherwise sterling numbers. Following his award-winning week, he ranks third in the Sally League with a 2.19 ERA and leads with a 32 percent strikeout rate. But he also has issued 43 free passes in 40 innings with a 14.1 percent walk rate that is highest among all Class A qualifiers.

It's that 40-grade control that has held Corry back since the Giants took him in the third round of the 2017 Draft and gave him a $1 million signing bonus (above the $558,500 slot) to go pro instead of attending BYU. Otherwise, when Corry is filling in the zone, he has the arsenal to get whiffs, especially at the lower level. His curveball is his best pitch, receiving a 60 grade from MLB.com last offseason, while his fastball can be above-average, sitting in the low-90s with movement. With a chance to show an average changeup, that's a good enough package to stick as a starter, if the control improvements continue. Going back even to April, this was something on Corry's mind.

"I think it comes down to just being able to attack guys. Not nibbling, not being afraid, just attacking hitters and giving them everything I've got has led to me having success with swings and misses," he told MiLB.com's Rob Terranova on April 13. "My stuff is good and my stuff plays, so if I just attack hitters I'll get the results I want."

Indeed, Corry's control had been steadily improving before he picked up this accolade. Over his last five starts (including the two last week), he has walked only 7.4 percent of the batters he has faced, about half of his walk rate on the season as a whole. He has a 1.46 ERA, 0.77 WHIP and 29 strikeouts over 24 2/3 innings over that same span.

Below is the complete list of Minor League Pitchers of the Week for July 1-7: