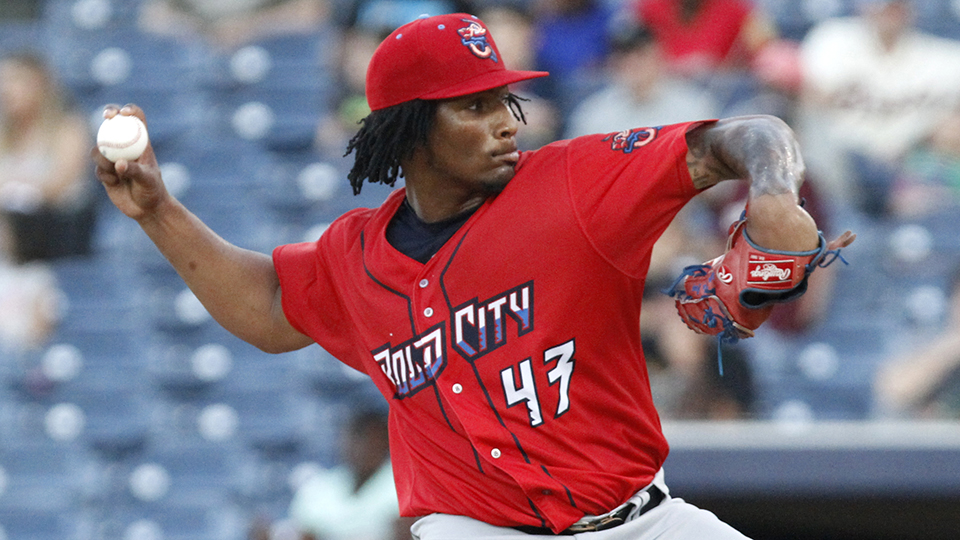 Sixto Sanchez pitched in and out of trouble Sunday.

Over six innings, MLB.com's 23rd-ranked prospect worked around five hits and a walk while striking out four as Double-A Jacksonville blanked Birmingham, 1-0, at the Baseball Grounds of Jacksonville.

"He pitched today -- changed speeds, managed counts, followed the gameplan," Jumbo Shrimp pitching coach Bruce Walton said. "He knew when to throw the changeup, the fastball, and then he worked in the slider.

"As with any young pitcher, it's the same. We've been working on changing speeds. Everything we've worked on the past three weeks, he put it together. He was executing three pitches, changing speeds and keeping hitters off balance."

Sanchez (2-2) retired the first four batters before yielding back-to-back singles to Yermin Mercedes and White Sox No. 8 prospect Blake Rutherford. But the right-hander punched out Trey Michalczewski and induced Ti'Quan Forbes to line out to left to escape unscathed.

After a 1-2-3 third, Sanchez got two quick outs in the fourth before Mercedes singled and Rutherford doubled. After a conference on the mound, he coaxed a fly ball to center from Michalczewski to end the threat.

"Regardless of velocity, he fell into the category of 'strike thrower,'" Jacksonville manager Kevin Randel said. "Once runners were on base, he dialed it in.

"He's progressing. He's pitching more instead of throwing. We have worked on a few things during bullpens, side sessions. Pap [Walton] and I actually talked about how he 'pitched' today."

The fifth was another three-up, three-down affair for Miami's top prospect. With a 1-0 lead In the sixth, Sanchez gave up a leadoff single to Chicago's fourth-ranked prospect Nick Madrigal, then struck out Luis Gonzalez before issuing a five-pitch walk to Gavin Sheets, the No. 17 White Sox prospect. Another mound visit helped focus the Dominican Republic native.

With one out, Sanchez got Mercedes to roll over a pitch for a groundout at second that forced out Sheets as Madrigal advanced to third. On a 1-1 count, he induced an inning-ending grounder from Rutherford to first baseman John Silviano to cap his six-inning stint at 90 pitches, 61 for strikes.

"Sanchez is young, he's only 20," Walton noted. "To go and pitch, to execute like he did today, these are the results. It gives us something to build on."

Randel added that the Jumbo Shrimp starters have progressed throughout the first half of the season. "Cody Poteet, Robert Dugger, Jorge Guzman, Sanchez ... they're finding their niche at Double-A," he said. "We go with different gameplans, but we expect them to execute.

"Going in, we knew we'd be pitching-dominant. It's a learning process, adjusting to the league, changes game to game and at-bat to at-bat. There is no doubt pitching has set the tone."

Sunday marked Sanchez's first shutout appearance since his Double-A debut against Biloxi on May 14 after his promotion from Class A Advanced Jupiter. He lowered his ERA in the Southern League to 3.08.

Jeff Kinley worked the final frame, striking out the side for his second save.

Miami's No. 14 prospect Brian Miller went 2-for-4 with an RBI single for Jacksonville.

Matt Tomshaw (2-3) took the loss after allowing one unearned run on three hits and walk over six innings. He struck out eight.