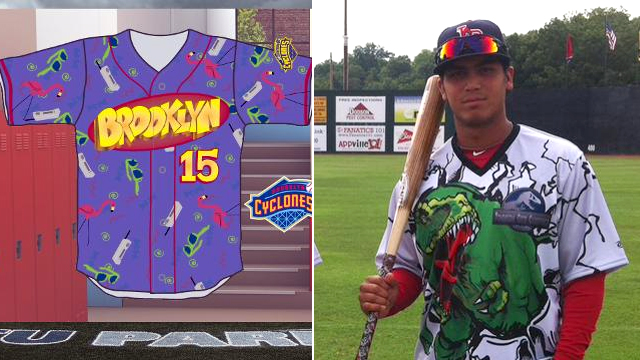 From Bayside to the Jurassic Era, short-season clubs are getting into the theme-jersey act.

Minor League teams are known for the creativity of their gameday promotions. On Tuesdays this season, we preview the most intriguing for the week ahead. If you'd like a particular promotion to be considered for this feature in the future, please send it to benjamin.hill@mlb.com with the subject line: "Promo Preview" or send a Tweet  to @bensbiz, hashtag "#promopreview."

MCU Park, home of the Brooklyn Cyclones, is technically (kinda sorta) bay-side. On Wednesday night, they'll be hosting (Hudson) Valley. Could things come together for a Saved by the Bell night any better?

Coming Wednesday, from the team that brought you 2014's critically acclaimed and Golden Bobblehead-winning Seinfeld Night, Salute to Saved by the Bell arrives in Brooklyn, to be played in front of a live ballpark audience.

"Going into this year, we were looking for a way to sort of combine the success of 90s night with the pop culture element of Seinfeld night, and Saved by the Bell was a logical fit," Cyclones Director of Communications Billy Harner said.

Nostalgia for the 90s is on the upswing thanks largely to the fact that Jimmy Fallon's writers have run out of ideas except to think of ideas for which old sitcom stars they can invite on The Tonight Show these days. Nevertheless, the Cyclones were prepared to seize on the internet frenzy that Fallon's SBTB reunion sparked in February, rekindling memories of the fictional Bayside High School's hijinx.

"We saw we were playing Valley [Bayside's rival in the show] on June 24, and it made perfect sense. " Harner said. "The reception to the night has been crazy. We sold over 6,500 tickets before we even put single-game tickets on sale. It was all groups, season plans, mini-plans, and the sponsor for the night, CUNY (The City Universities of New York), brought a huge block to invite their students out to the game."

To honor the classic Saturday morning show, the Cyclones have a host of activities and games that really should be read inside your head in your best mental Casey Kasem voice. They include a pregame dance competition set to Lisa Turtle's famous "the sprain" move, A.C. Slater's Sitting Backwards Musical Chairs, and Oldest Cell Phone in the Ballpark competition, an appearance by the cast of National Lampoon's off-Broadway parody play Bayside! The Musical! and a Zack Morris "TIMEOUT!" race around the bases in which confused modern children will have to stop in their tracks whenever they hear Zack stop time with one of his many signature lines.

And of course, actor Dennis Haskins -- Mr. Belding himself and a touring Minor League star in recent years -- will be in attendance. Brooklyn is offering a special "Detention with Mr. Belding" ticket option for Wednesday that includes drinks with everyone's favorite "Big Bopper."

The Cyclones will also be sporting special SBTB jerseys that have proven to be a hit -- and not just with fans in Brooklyn. "They have been our most popular promo jerseys we've ever done," Harner said. "We've had people from every corner of the country asking if they can get one.

"But more than anything, Zack Morris himself, Mark-Paul Gosselaar, contacted us and wants one for himself as well."

Turns out Preppie has good taste.

Whether they're slow zombies (The Walking Dead), sprinting zombies (World War Z) or Zombies that have the ability to fall in love (Warm Bodies), there's something for everyone in the zombie-mad world we currently inhabit. Last year's apocalypse-themed jerseys caused a stir for the 66ers, and they'll be back for the third annual edition. Once more, the 66ers will partner with LifeStream, an area non-profit blood center, for the promotion. In addition to a mobile blood donation area outside San Manuel Stadium from 3:30-6:30 p.m. Thursday, proceeds from the postgame auction of Inland Empire's signature jerseys will go to benefit LifeStream.

When arguably the best player in the world donned your club's uniform, you celebrate him. That's what the Kernels will be doing as part of their Halfway to Christmas night on Friday. In 86 games with Cedar Rapids between 2009 and 2010, Mike Trout blistered the Midwest League to the tune of a .358/.452/.514 slash line, circuit All-Star honors, and a Futures Game selection. Cedar Rapids' city nickname is "City of Five Seasons," which presumably are winter, spring, summer, fall and baseball. So why not put the 2014 American League MVP in some snow?

Teams have figured out how to make a lot of different body parts jiggle in promotional figurine giveaways in recent years. Akron is heading down that road by highlighting one of former Canton-Akron Indians slugger Albert Belle's most famous (or infamous) moments. In the 1995 American League playoffs, Belle homered against Boston, and Red Sox manager Kevin Kennedy asked umpires to check if his bat was corked. In response, Belle flexed from the Indians dugout and pointed to his gigantic right arm. Now, that arm -- or the most distinct part of it -- will bobble away for the first 1,000 fans through the gates at Canal Park on Saturday. Worth noting: Cleveland did a similar giveaway in 2013. That biceps didn't bobble.

Though plenty of teams go retro to honor movies and television shows, the Cardinals are hitting 2015's biggest summer hit right out of the gate. In just their third home game of the Appalachian League season, Johnson City will break out promotional T-Rex jerseys -- a relative rarity for short season clubs -- in celebration of [say this all in one breath] Chris Pratt being able to talk to velociraptors, the dangers of genetic mutation as it pertains to dinosaurs and the corporate age we live in, which included a Jimmy Buffett's Margaritaville restaurant at the park in the movie (no, really). A cool facet of Johnson City's dino-centric night: it's presented in tandem with East Tennessee State University's Gray Fossil Site and Museum, an institution dedicated to a deposit of fossils in that part of the state.

We can't just stop with those. Here are some more promotions of note across the Minor League landscape this week.

June 24: Embarking on another week of badgering Sacramento on social media, the Fresno Grizzlies are challenging fans to dance the entire game Wednesday with their Fresno Dance-Off. Those who can make it through win a prize pack that presumably includes a DVD copy of the music video to Jack's Mannequin's "Dark Blue".

June 25: Across the Minors, Star Wars nights are the standard, but the Charlotte Stone Crabs will honor another mid-70s classic with Jaws night. … Fans with peanut allergies need have no fear this week in the Cleveland area where the Lake County Captains will "clean and sanitize" Classic Park to ensure a peanut-free environment for their entire homestand.

June 26: Instead of getting excited for one holiday, the Lake Elsinore Storm are pumped for two with Halfway to Nightmare Before Christmas, a ballpark hybrid celebrating both Halloween and Christmas (and Tim Burton, one imagines). … Without the Wilmington Blue Rocks, there might not have ever been any Cowboy Monkey Rodeo nights, and the legendary promo dog-monkey-sheep crew returns to Daniel Frawley Stadium on Friday.

June 27: The farewell tour of the Jacksonville Suns' first family continues with a bobblehead honoring Madame Chairman Mary Frances Bragan. … A Promo of the Year finalist from 2014 returns in New York where the Rochester Red Wings host Batman and Robin Night. … The Williamsport Crosscutters have their Star Wars Night with Yoda-themed jerseys to be auctioned off after the game.

June 29: Akron is back and taking on a Double-A topic with "Can You Beat The Pitch Clock? Minute to Win It".

June 30: Former Blue Jays great Tony Fernandez heads to the Northwest for an appearance with the Vancouver Canadians. …On the other side of the continent, former Red Sox star Bernie Carbo will meet and greet fans of the Vermont Lake Monsters.