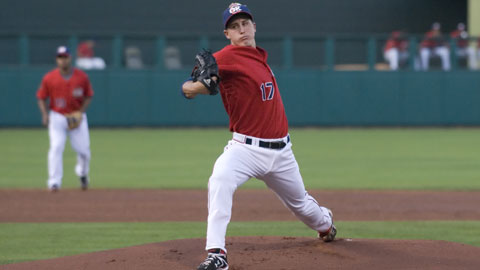 Derek Holland, one of about a thousand promising pitching phenoms in the Texas Rangers organization, may be one or two starts away from returning to the major leagues.

Says who? Says Holland, who has been on the Texas disabled list since May 31, and his RedHawks pitching coach, Terry Clark.

"I feel like I could use another start out here, and keep working," Holland said. "I haven't gotten to see many live hitters, so this is good for me."

Clark said, "He's not ready to go back to the big leagues. He needs one more start, maybe two. We'll see how he does. But he's going to have to show me his harder slider and throw his changeup for strikes before he goes anywhere."

Holland looked super Wednesday at AT&T Bricktown Ballpark, allowing just one hit (a home run) over five innings of the Hawks' 5-1 win. But he was facing the Round Rock Express, who have the second-worst record (43-62) in the Pacific Coast League.

"I was anxious to get out there," said Holland, who hadn't faced batters above the rookie league level in nearly two months, since May 30. "I was a little upset with the (two) walks, but the main thing was just to be able to control the game and stay ahead of hitters and keep the ball down."

Holland faced the minimum 12 batters through four innings, walking two batters, who were later erased on a pickoff and double play.

"I felt good about my results," Holland said. "I attacked the zone and let my defense make plays behind me, and the offense showed up real good."

The only hit off Holland was Chris Shelton's leadoff home run to left field in the fifth inning. It came on a full-count slider that got up too high in the strike zone.

"It was just one of those things where you tip your hat to him," Holland said. "I left the ball up a little bit, but maybe a little better slider would get him out."

He walked the first batter he faced, on a full count. Only four of his 10 pitches in the first inning were strikes. But he settled down quickly, throwing only 28 pitches, 19 in the strike zone, over his next three innings.

Then came Shelton's homer, followed by three straight infield outs, followed by reliever Elizardo Ramirez opening the sixth inning. Holland threw 22 of his 60 pitches in his final inning of work.

Holland, 23, has opened the last two seasons with Oklahoma City. He made just one start for the RedHawks last year, then was called up by Texas for the rest of the season.

This year, Holland was the RedHawks' opening night starter and the Pacific Coast League's best pitcher before called up May 13 by Texas. He had a 4-1 record and 0.93 in six starts for the RedHawks, including a 21 2/3-inning scoreless streak in his first four starts.

Holland had a super start with Texas, too, this year. He was 2-0 with a 2.65 ERA after his first three Rangers starts. Then the lefthander began to be bothered by inflammation in his left rotator cuff. He allowed four runs in two innings, on five hits and three walks, before going on the DL.

Before rejoining the RedHawks this week, Holland made an injury rehab start in the Arizona Rookie League. He threw three hitless innings, striking out six and allowing only one base runner - on a wild pitch after a strikeout.