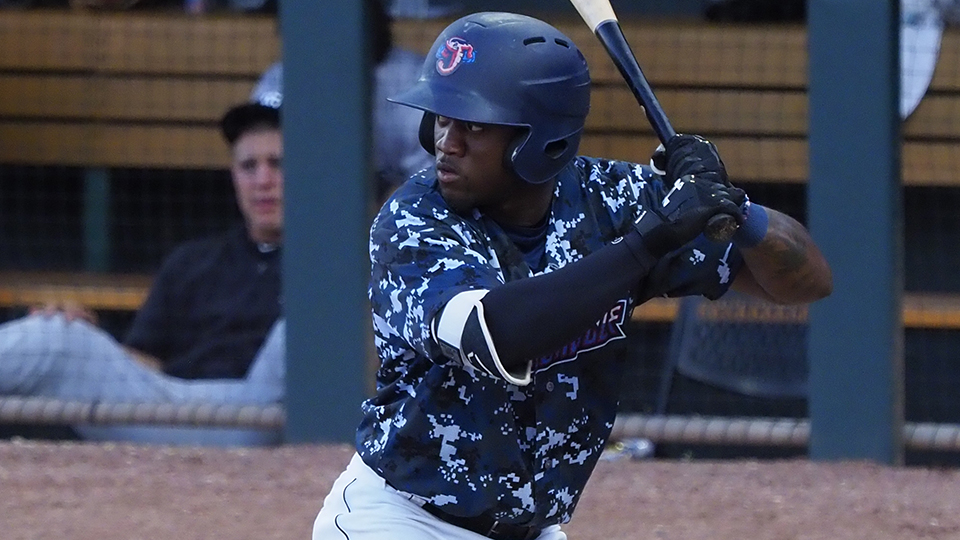 Anfernee Seymour was a seventh-round pick by the Marlins in 2014 before being traded to the Braves and then released. (Jim Brady)

Anfernee Seymour didn't cringe when one of the toughest moments of his professional baseball career was brought back to life.

Instead, the Marlins prospect welcomed the chance to talk about the missed opportunity to play in the Arizona Fall League in 2017. At the time, the outfielder was with the Florida Fire Frogs, the Class A Advanced affiliate of the Braves. Seymour was a top 30 prospect and set to play in Peoria with others on the rise within the organization, including Ronald Acuña Jr. and Austin Riley.

A violation of team rules wiped out his chance to play the AFL.

"I'm glad you brought that up," Seymour said. "Like I tell a lot of people, I don't think anyone has had a tougher road -- like not being able to go to the fall league. But that's because of me and my decisions. I didn't think, in my mind, it was that serious of a deal, but I understand where they were coming from."

Despite owning the situation, it didn't make the blow any easier to absorb.

"It sucked, man. I've been where my mind is like at the end and I'm so down, but I've always worked hard," Seymour said. "That's the one thing I can say. I work very hard to accomplish things. It gives me motivation. It gives me the drive to succeed. To have that taken away back then, it was tough."

Yet, he has pushed forward and is playing for the Double-A Jacksonville Jumbo Shrimp. He's back in the Miami Marlins organization, the team that drafted the native of the Bahamas in the seventh round in 2014 out of American Heritage High School in Delray Beach, FL. In 46 games, the 24-year-old outfielder has tallied 28 hits, including seven in his last 10 games, and he owns a .237 batting average.

"Midseason last year I started to really understand myself and my swing, and kept trying to repeat it," Seymour said. "This year started off a little rough, but I stuck with it. I got back to what I first figured out last year. It's been going well for me the last couple of weeks."

Jacksonville manager Kevin Randel said the effort Seymour has put forth has made a difference.

"Anfernee has really put in the work this season to get better," Randel said. "We have really valued his work ethic, versatility and strong defense on our club this season."

Seymour grew up where baseball isn't nearly as big of a deal as it is in the United States. His interest in the game was sparked by his mother, who played softball and also worked as the secretary of the Freedom Farm Baseball League, a non-profit baseball club started in 1989 that focuses on skill development, character building and encourages the pursuit of higher education.

Freedom Farm has been the launching point for players who have gone on to play pro ball, including Antoan Richardson, who spent time with the Braves and Yankees. Richardson was one of those players who inspired Seymour growing up. In the offseason last year, Seymour returned home to run a camp for children. He was joined by former Olympic softball star Natasha Watley.

"It was a blessing to go back, one of the greatest feelings ever," Seymour said. "I was once that little kid looking up to some of the pro players out of the Bahamas. I remember how they made me feel when I was a kid. I want to do the same for kids coming up, maybe inspiring them to play pro baseball one day."

Plans are in place to start a foundation that will provide children who are less fortunate with the opportunity to get seen by college or pro scouts.

"I'm all about giving back and trying to help kids," Seymour said. "I've been lucky to come over here and play, and I want other kids to have that opportunity. I want kids to have options, whether it's going to school, playing baseball or competing in another sport. Anything I can do to help someone out or just make someone's day better, I'm all about that. I'm 100 percent on board. That's what my foundation is really about."

Seymour is also about staying the course despite the ups and downs of the game. Traded to the Braves in 2016, he was let go less than two years later.

"I wouldn't wish being released on anybody," Seymour said. "It's one of the worst feelings in the world. But I thank the Marlins for believing in me, for giving me another chance to continue my career."

He has done his best to make the most of it and seeks continued improvement, both as a hitter and defensively. If the chance ever came to play Major League Baseball, he'd be forever thankful for it. All he can control, however, is effort and the energy he brings to the field.

Seymour still takes to heart the advice he received from former MLB player Lenny Harris, a bench coach in Daytona who played two seasons with the Marlins.

"He always said to never get too high or too low, to find that medium," Seymour said. "I know if I have a bad game, I just have to brush it off and prepare for the next one. I'm going to keep working hard because I know nothing is going to be given to me."

Red-hot hitting: Chattanooga cranked out 13 hits in a 6-1 win over Tennessee on Tuesday night. Extra-base hits proved key, including doubles by Mitch Nay, Brantley Bell and Michael Beltre. Nay and Bell have been two of the best when it comes to doubles, combining for 25. Nay leads the way with 13.

Winning feeling: Montgomery carved out a special place in franchise history Monday night in a 9-4 win over Jacksonville, notching its 39th win, the most in the first half of a season in franchise history. The previous best for the Biscuits in a first half was 38 wins in 2010. Paul Campbell provided a big lift with a strong Double-A debut. He threw three innings of scoreless ball to start the game and ended up going six frames, giving up three runs on six hits while striking out four.

Brian Lester is a contributor to MiLB.com. This story was not subject to the approval of the National Association of Professional Baseball Leagues or its clubs.