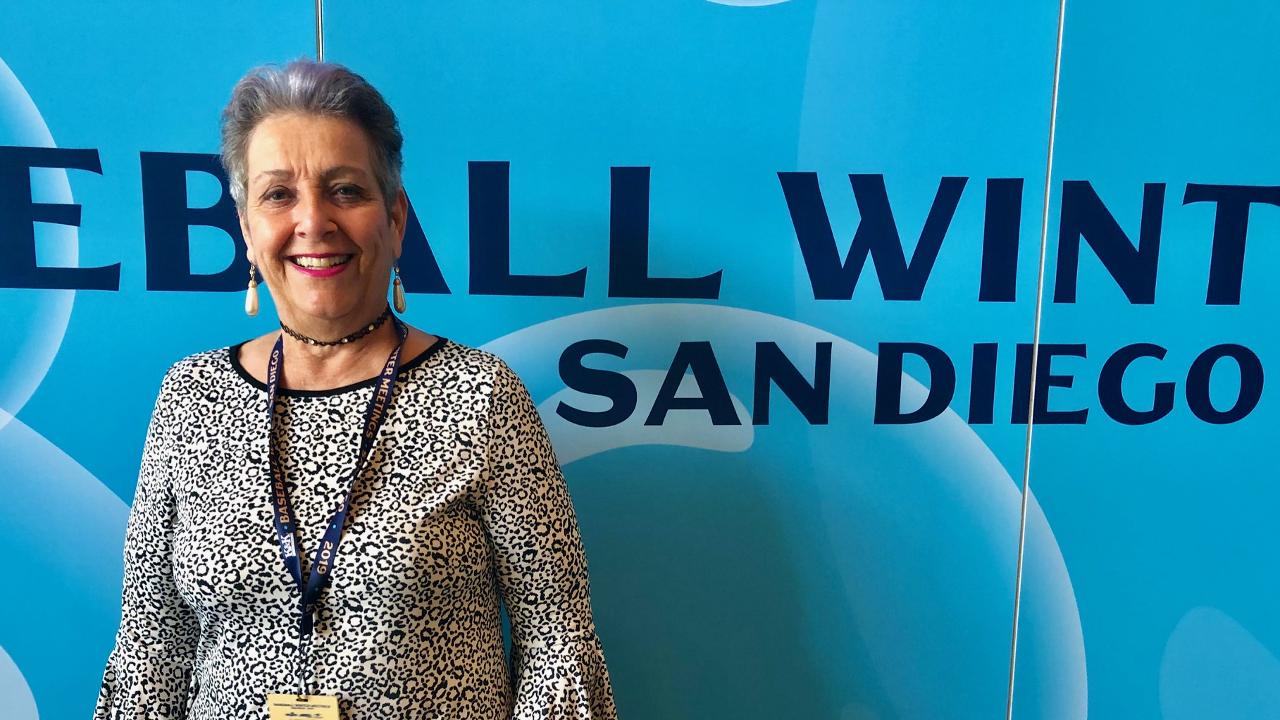 After beating cancer, Jane Rogers came to the Winter Meetings in San Diego to belatedly accept her executive of the year award.

Rogers, the Class A Short Season Staten Island Yankees' first -- and therefore longest tenured -- employee, currently serves as the team's senior vice president of baseball operations. She was unable to attend the 2018 Winter Meetings after receiving a breast cancer diagnosis earlier in the year.

"I was diagnosed in March of 2018 and I started treatment on [New York-Penn League] Opening Day in June and that went right up through Thanksgiving," said Rogers. "When it was announced in 2018 that I won the league award, that was right in the middle of everything. I was doing chemo, I was getting ready for surgery and radiation. And I said, 'Oh, of all the years. After all these years, I'm not gonna be there, I can't be there.' [Minor League Baseball president] Pat O'Conner, he had recorded a video. It was so nice, best wishes from afar, but then they told me that they were going to redo it for me this year so that I could be recognized. So that was pretty cool!"

"Look, I didn't know what was gonna happen. I'm officially cancer-free, thank God. It was a rough, rough year, but it made me realize how much I do love the job and baseball," said the native of Brooklyn's Bay Ridge neighborhood. "I was undergoing the chemo, I was weak as hell, but the biggest thing for me was not being at that ballpark. How crazy is that?...But I stayed in touch every day with the manager and the team members, the front office. When they said they were gonna redo this award, even though I was planning on coming to the Winter Meetings, I said, 'Oh gosh, this is great.' It's pretty special because I didn't know. You don't know how you're gonna react. I mean, I was diagnosed with Stage 2 cancer, but they don't know until they actually go in and see everything. But it hadn't spread, so I was OK and I came back pretty strong. But it was my baseball family that got me through this, believe me. My family, yes, but also baseball people from the top all the way to the bottom."

"They were doing breast cancer awareness night. Everybody was shaving their heads for me. They were really, really supportive," she said. "The [team] interns used to come to my house and I would say, 'OK, here's what we're doing. Do this, do this, do this, whatever.' And Will was like a brother to me throughout this whole thing. I mean, I cried on his shoulder every day and he was one of the first people that I told about it."

Even before coming back from that fight, Rogers' Minor League career could have been described as unique and improbable. As a native New Yorker, her baseball knowledge began and ended with the Mets and (big league) Yankees. Minor League Baseball was a world she knew literally nothing about.

"This was a freaky story," said Rogers of her pathway to a baseball career. "It was actually a little ad in the newspaper. I think my son [Matthew] was in the seventh or eighth grade, and he had to do something for homework, to pick out an actual classified ad. It said 'Office manager wanted' and that's how I applied. And after tons of interviews, they called and said 'Hey, would you like a job?" I said, 'Sure.' That was my birthday, Feb. 11, 1999. I didn't know what I was getting into! At the time, I was selling garage doors part-time when my kids were in school. I had never been to a Minor League Baseball game in my life. So then it was like, 'Oh, so there's 38 [home] games. Well, maybe I'll work a few of them.' And then how could you not work all of them? And then everything else. And that was how it started."

"Sometimes they call me the mother of the team," she said, before emitting a comical groan. "Don't call me Mom. But I just have that because I'm a mom. I'm a very caring person and sometimes I wear my heart on my sleeve. People say, 'Ahhh, that's not so good, it's a sign of weakness.' No, it's not. It's who I am. What you see is what you get. I'll do anything for anyone that needs help. Whether it's in the office or home or church, whatever it is it's just what I like to do. And especially now, even going through [cancer], I realized that there were people worse off than I was, who tolerated it a lot less than I could, so I found myself talking to these people when we were going through chemo. 'You're gonna be OK. Your hair will grow back. You're gonna be fine, it'll pass.' I loved it, it's just the way I am and I think more so now."

Rogers said she was able to help others during that trying time because of her own strong support system -- in particular her husband, Mike, and their two grown children, Matthew and Julie. And, of course, her "baseball family" was with her every step of the way.

"I had tears in my eyes, seeing everybody [at the Winter Meetings]. It's a nice feeling to know that you were in people's thoughts and prayers and well wishes all along," she said. "A lot of people probably didn't recognize me. I look a little different. Probably about 50 pounds lighter and I now have blue hair compared to my blonde, wild hair. But, yeah, it's wonderful. I still love this, still love the job, still love the game.

"I'm 63 now and don't have plans for retirement. As long as I feel good, I'm gonna be there at the ballpark. I'm truly blessed. Truly, truly, truly."