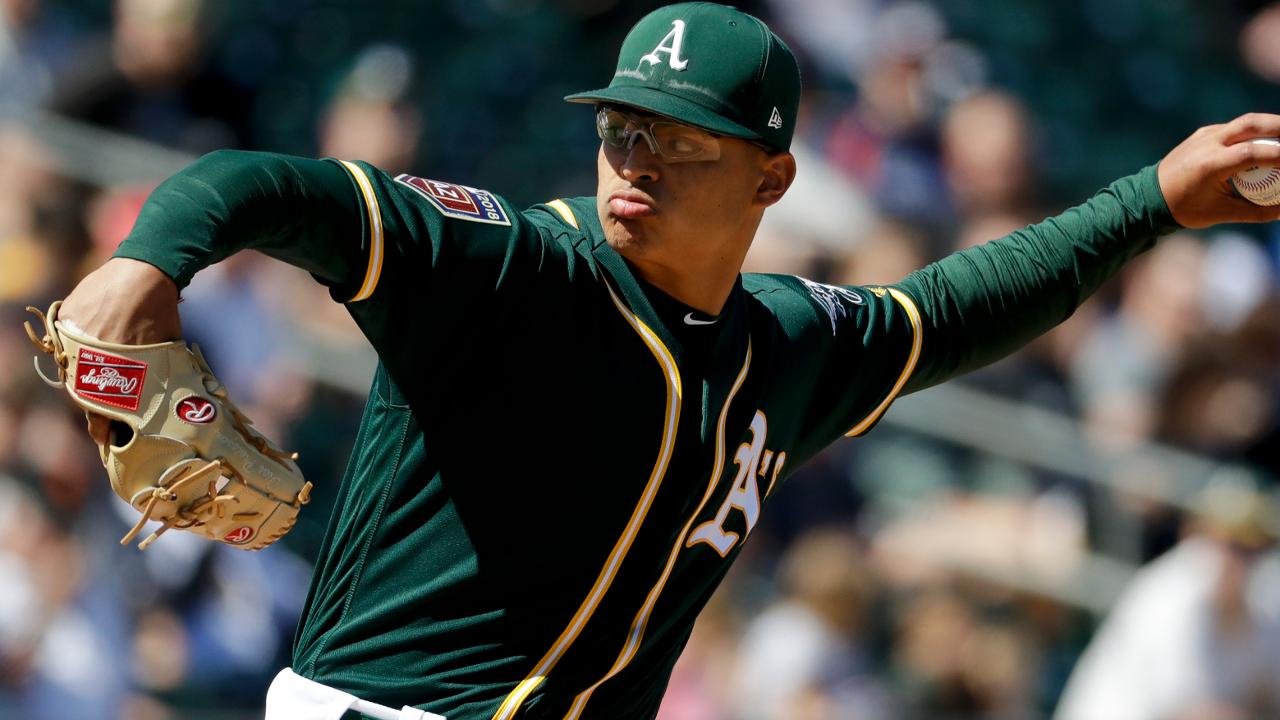 Jesus Luzardo owns a 2.29 ERA with 128 strikeouts in 106 1/3 innings across three levels this season. (Chris Carlson/MiLB.com)

The only thing that may be more surprising than what the Oakland A's are doing at the Major League level -- battling for a playoff spot atop the American League West -- is what the organization has going on in the Minors.

A farm system that garnered minimal attention heading into the season and is currently ranked outside the top 10, according to MLB.com, has quietly assembled one of the best pitching pipelines in baseball.

Through the Draft and various trades, Oakland stuck to its philosophy of gathering arms, even rolling the dice on some injured players who fit the bill. If those players return to full strength, and their breakout prospects from this season can continue their momentum, the A's future on the mound appears to be in good hands.

"Our philosophy has always been to find guys who pitch with their head, heart and guts, and have the stuff to miss bats," said Gil Patterson, Oakland's Minor League pitching coordinator. "We want guys who attack the strike zone and get swings and misses. If there is contact, we want soft contact, but the worst way to let someone get on base is by walking him. We emphasize pitching from strike one and taking control of the mental side of the game -- staying focused on the next pitch without letting anything bother you. This is what keeps us all on the same page and helps us as an organization from top to bottom."

Video: Nashville's Luzardo gets the K in Triple-A debut

One of the team's breakout prospects this season -- and shining example of this philosophy -- is Jesus Luzardo. A third-round pick of the Nationals in 2016, Luzardo was acquired by the A's just before last year's Trade Deadline in a deal that sent relievers Ryan Madson and Sean Doolittle to Washington. The left-hander was recovering from Tommy John surgery, which he underwent the March before he was drafted, but sparkled in limited action. Across three teams and two levels in 2017, Luzardo finished with 48 punchouts and five walks over 43 1/3 innings while posting a 1.66 ERA.

"He's as complete a package of a pitcher that I've ever seen," Patterson said. "He's got body control, mental discipline and his arsenal is tremendous. And he always wants to get better. He never just sits in it like guys with his talent might do. His ability to get better and want to learn is tremendous."

Oakland's top prospect opened this season with Class A Advanced Stockton, lasting three games in the California League before being promoted to Double-A Midland on April 24. Luzardo appeared in 16 games for the RockHounds and allowed one run or fewer in 11 of those outings. He yielded a combined three earned runs over his final nine starts with Midland -- including a stretch of five consecutive scoreless outings. After fanning 86 batters in 78 2/3 frames and amassing a 0.97 WHIP, MLB.com's No. 12 overall prospect joined Triple-A Nashville on Aug. 15.

"When I started the year, I definitely didn't expect to be here. But I'm glad it happened," said Luzardo, who represented Venezuela in this year's Futures Game. "I'm happy to be healthy, throwing the ball well and feeling good. All that rehab and all that time off just made me want to prepare more so that I don't have to take time off like that again."

After a loud introduction to the Pacific Coast League, where Luzardo tossed five shutout innings with six whiffs and no walks in his debut, the 20-year-old was touched up for four runs and didn't make it out of the fourth his next time out. However, he returned to form in his last start -- yielding one run on three hits while striking out six over 4 2/3 frames.

"I'm not surprised that he's here already," said Sounds pitching coach Rick Rodriguez, who is in his 34th year in the A's organization. "I saw him pitch in Spring Training in a game against the Angels. And when he came in, he had to face Mike Trout and Albert Pujols and did well against those guys. I was like, 'Wow, who is this kid?'

"He's got a good moving fastball, command to both sides of the plate, and he's got two different kinds of curveballs, which I really didn't know until he got here, and he's got a really good changeup. He's got the stuff to pitch at the Major League level, but right now it's about refinement and learning what to throw and when."

"How many 20-year-old kids have the stuff to throw 80 pitches and can get 80 swings and misses? He does," added Patterson. "He should have a long future with us."

Oakland's 27th-ranked prospect, Wyatt Marks has also impressed the organization with his performance this season. Taken by the A's in the 13th round of last year's Draft, Marks garnered a reputation for missing bats while at Louisiana-Lafayette after fanning 100 batters in 59 1/3 innings and leading all Division I pitchers with a ratio of 15.17 strikeouts per nine innings.

"He's got an invisible slider," Patterson said. "To the naked eye it doesn't look like it does much, but no one can hit it. I think for every 20 swings against it, 15 are misses."

"My dad and my brother taught me how to throw my slider when I was kid, and I've been throwing it the same way since," Marks said. "The deception of it isn't really something you learn or can teach, it's kind of like sinkerballers with that really sharp break -- you just kind of have it."

After striking out 49 hitters over 37 innings with Class A Short Season Vermont to conclude last season, Marks opened this year with Class A Beloit. In 20 games for the Snappers (18 starts), the 23-year-old whiffed 127 while walking 35 and allowed 90 hits over 106 innings. He was promoted to Class A Advanced Stockton on Aug. 2, though still ranks tied for second in K's in the Midwest League.

"I've just been mixing in all three of my pitches well -- fastball, changeup and slider -- and attacking each hitter," Marks said. "In Beloit, I really worked on my change, and it's come a long way. Now I can throw it in there for a strike whenever I need it, but also use it as a pitch to expand the zone. It's also increased the effectiveness of my slider."

"We know the importance of a changeup, so we made him throw it 20 percent of the time while he was with Beloit," Patterson said. "So now hitters can't sit on a pitch when they face him."

After a scoreless Cal League debut with five strikeouts over 6 2/3 frames, the right-hander has now posted a 2.12 ERA in three starts with the Ports and amassed 21 punchouts over 17 innings.

"Hitters just don't seem to see the ball really well against him," said Stockton pitching coach Bryan Corey. "He locates his fastball well, and he goes back to his slider and changeup to keep hitters off-balance. When he's out there, he really trusts his stuff. He can throw a fastball in a fastball count and still gets swings and misses."

Two other hurlers who have flown under the radar are A's No. 25 prospect Brian Howard and 28th-ranked Parker Dunshee.

Howard was an eighth-round selection of Oakland in last year's Draft, and the Texas Christian product began this season with Stockton. After whiffing 77 and allowing 53 hits in 72 innings with the Ports, the 23-year-old right-hander was promoted to Midland on June 21. Through his first seven starts with the RockHounds, Howard posted a 2.35 ERA and allowed three runs or fewer each time out.

Dunshee was taken one round earlier than Howard in the same Draft. The 23-year-old out of Wake Forest also began the season with Stockton and received the nod to join Midland on June 13 after pitching to a 2.70 ERA in 12 Cal League games with 82 whiffs to 17 walks over 70 innings. In 10 Texas League starts, the righty has fanned 68 and walked 11 over 66 1/3 frames. He also boasts a 0.96 WHIP.

"Both of these guys are going to be special," Patterson said. "They'll hit a few bumps in the road, but man, their stuff is really incredible."

Puk, baseball's No. 38 prospect, was taken sixth overall in the 2016 Draft by the A's. The 23-year-old southpaw finished with a 6-10 record last year between Class A Advanced Stockton and Double-A Midland, posting a 4.03 ERA and 1.25 WHIP. The University of Florida product finished third in the Minors with 184 strikeouts in 125 innings.

In four appearances (three starts) with the big league club in Spring Training before he got hurt, Puk posted a 3.38 ERA with a 1.22 WHIP and seven punchouts in 10 2/3 innings. He was expected to open the season with Triple-A Nashville.

"He's gonna be a beast," Patterson said. "His size, he's like Randy Johnson. He's got a great downhill angle and has continually gotten better. We made a small mechanical adjustment with him and he added a cutter because of it. He's always had a great changeup. It's his best pitch -- the bottom just drops out of it. His fastball has good movement and touches 98 mph. We're excited to get him back."

Kaprielian was taken No. 16 overall by the Yankees in 2015. The UCLA product was strong in three starts for Class A Short Season Staten Island in 2015, allowing two runs on eight hits with two walks and 12 strikeouts over nine innings. The 24-year-old righty opened the following season with Class A Advanced Tampa and was dominant over three Florida State League starts -- posting a 1.50 ERA and 0.61 WHIP over 18 frames with 22 punchouts and three walks. He was acquired by the A's at last year's trade deadline in the deal that sent Sonny Gray to New York.

"If he can get healthy, he has a chance to be a top-of-the-line Major League starter," Patterson said. "That's really the biggest obstacle right now, but if he gets there I don't think he's going to take a back seat to anyone. Go back and look at video of him in Spring Training with the Yankees in 2016 and 2017 -- he's got a fastball that comes in 93-97 mph with a hammer and a bottom-out changeup. And his work ethic is second to none."

Jeffries was taken 37th overall in the 2016 Draft by Oakland. After seeming to overcome shoulder problems in college, the University of California product shined in his debut season: 17 strikeouts to two walks over 11 1/3 innings in five appearances for the Rookie-level Arizona Athletics. The 23-year-old righty opened the following season with Class A Advanced Stockton but only lasted two games (one start) before needing to undergo TJ surgery on April 21. Jeffries attempted to begin his comeback trail on June 19 when he started a game in the Arizona League but was removed after two innings and shut down for the year.

"Coming back from Tommy John has really been a roller coaster ride for him, but he's no slouch," Patterson said. "The ball just jumps out of his hand like it's coming out of a cannon, and his changeup falls off a table. He's been working with all the guys down there [in Arizona], and he's really in the same boat. We've got an All-Star team down there trying to get healthy.

"The great part of it is that we're going to have a nice yearly progression of young pitchers coming up and helping Oakland win."