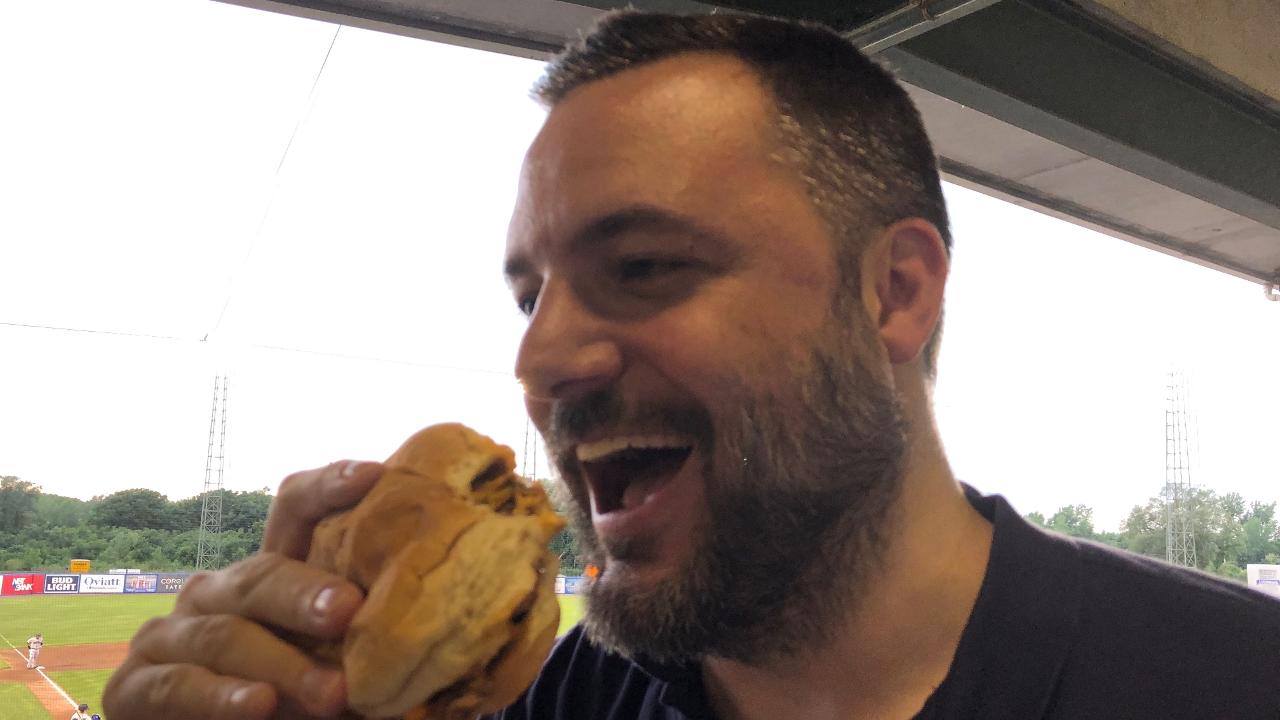 Syracuse legend Nando DiFino served as Designated Eater on July 12, when the Mets took the field as the Butter Sculptures.

Nando DiFino is a relentlessly exuberant and deeply loyal individual. He brings people together, pays for their drinks and seeks out commonalities, all while deflecting the well-deserved praise he recieves for so consistently acting in this manner. To know Nando is to love him.

I've known Nando since 2004, when he and I were in the same comedy writing class (RIP Second City NYC). After briefly losing touch, we reconnected the next year after I read a Deadspin interview with Sam Walker about his new book, Fantasyland. The book detailed Walker's obsessive attempt to win at fantasy baseball's highest level; in the interview, Walker explained that he hired two assistants to aid him in this quest -- and one of them was Nando! (The other was Sig Mejdal, now the Baltimore Orioles assistant general manager). The Deadspin interview contained a link to Nando's blog, Nandovia, and I wasted no time in contacting Nando via Nandovia channels. He invited me to the Fantasyland book release party (which, quite weirdly, took place in the lobby of a closed bank), and we've been pals ever since. Historically, we have been joined in our exploits by fellow Second City alumnus and retired NBA stand-up comic Tom Lorenzo. It's a long story, as most things are.

Nando, a resourceful fellow, parlayed his Fantasyland experience into a real-life fantasy career. Today, after stops at a multitude of outlets, he serves as managing editor of fantasy for The Athletic. But before Nando carved out his niche in his own private Nandovia, he was simply a Syracusean. His parent still lives in the city, as do several of his siblings. If you yourself are a Syracuse resident, then it's a good bet you know a DiFino.

I had last visited Syracuse in 2014, as part of a 10-city tour to conclude the 2014 season. I enjoyed my time there, and never said otherwise. But Nando, for reasons known only to him, decided that I did not like Syracuse and was purposely going out of my way to avoid a return trip. Furthermore, he felt aggrieved that I had never invited him to be a Designated Eater, in Syracuse or otherwise. In order to put a stop to this unwarranted slander, I agreed to spend a weekend in Syracuse with Nando. On July 12th, we attended a Syracuse Mets game at NBT Bank Stadium.

On this sunny Syracuse saturday, the Mets temporarily eschewed their parent club and suited up as the Butter Sculptures. This name was inspired by the butter sculptures of the New York State Fair, which takes place in Syracuse.

"I used to work at the State Fair, Benny!" exclaimed Nando. "At Pizze Fritte. It's like a real long pizza dough. I was the sugar-er. I was damn good at it, too."

Pizza Fritte is but one of thousands of reasons that Nando loves Syracuse.

"There's a lot of nature, and a lot of good people," he said. "It's a very diverse city and the bars are very cheap. You can walk in with $40 and have a very good time, Benny!"

Prior to the 2019 season, the Syracuse Mets were known as the Syracuse Chiefs. Nando estimates that he attended four Chiefs games each season, beginning at their former home of MacArthur Stadium. Back then, the team didn't sell items like the Amazin' Burger.

The Amazin' Burger, topped with pulled pork, fried pickles and the Central New York specialty that is boom boom sauce, was one of several State Fair-inspired items to debut on "Butter Sculptures Night." The name is an homage to the 1969 New York Mets, who, of course, were amazin.'

Nando's moment in the spotlight had finally arrived. He was ready for it.

"This is amazin'?," queried Nando. "No, it's delicious and surprisingly light for a hot day like today. It's nice. I'd buy this, and I'd tell someone else to go buy this. The sauce has a nice kick, and if you catch one of the pickles that's a nice surprise. The whole thing is nicely put together. It feels thoughtfully composed."

Nando, like all Syracuseans, has a soft spot for the celebrated regional delicacy that are salt potatoes. The Syracuse Mets take it up a notch by offering Loaded Salt Potatoes, topped with cheese and bacon.

Before sampling the Loaded Salt Potatoes, Nando offered an historical overview of this beloved local side dish.

@nandodifino, a native Syracusan, has a lot to say about Loaded Salt Potatoes 🧂 🥔 pic.twitter.com/gFW1OOEgtj

If you know the New York State Fair, then you know that Italian Sausage sandwiches are a big deal there. (The Syracuse Mets offer Hofman-brand Italian sausage. At the Fair, Gianelli's is the most well-known purveyor.)

In the below clip, Syracuse Mets general manager Jason Smorol makes a cameo appearance to explain the cultural significance of the Italian Sausage.

Next up was yet another State Fair-inspired offering, Mexican-style Street Corn. Since this was gluten-free, I gave it a go.

Every time I am pressed into being my own Designated Eater, I am reminded of what a difficult task it is. But, of course, I persevered and ultimately even excelled.

Not a pretty sight. pic.twitter.com/KVI76fg5Gk

Remaining in Designated Eater mode, I also sampled a unique strain of chips and dip. Potato chips and chocolate sauce, to be exact.

"The potato chips could have been crunchier, but this is a genuinely good mix of flavors," said I, according to my notes. "It's all there -- crunchy, salty and sweet."

As I was writing down my thoughts on chocolate sauce and potato chips, Nando and Smorol headed off down the first base side of the concourse. Their destination was The Hops Spot.

I'd never seen anything like the Hops Spot before, at least in a Minor League Baseball context. In addition to having five craft beers on draft, there were dozens upon dozens of bottled beer options. Smorol said that craft beer fans had begun coming to games just to go to the Hops Spot, and he knew this because said craft beer fans were constantly checking in at the ballpark via the Untappd beer app.

On this night The Hops Spot was overseen by Kara Johnston, a hops grower in nearby Wolcott who describes herself on her business card as a "hop goddess." She poured Smorol and Nando a five-beer flight of draft beers.

Of the beers he sampled, Nando declared New Belgium's Mural Agua Fresca Cerveza to be his favorite.

Nando may like the sour stuff, but he's a really sweet guy (despite his repeated unwarranted claims that I harbor an anti-Syracuse bias). He is now a proud member of the Designated Eaters club, and all is right with the world.