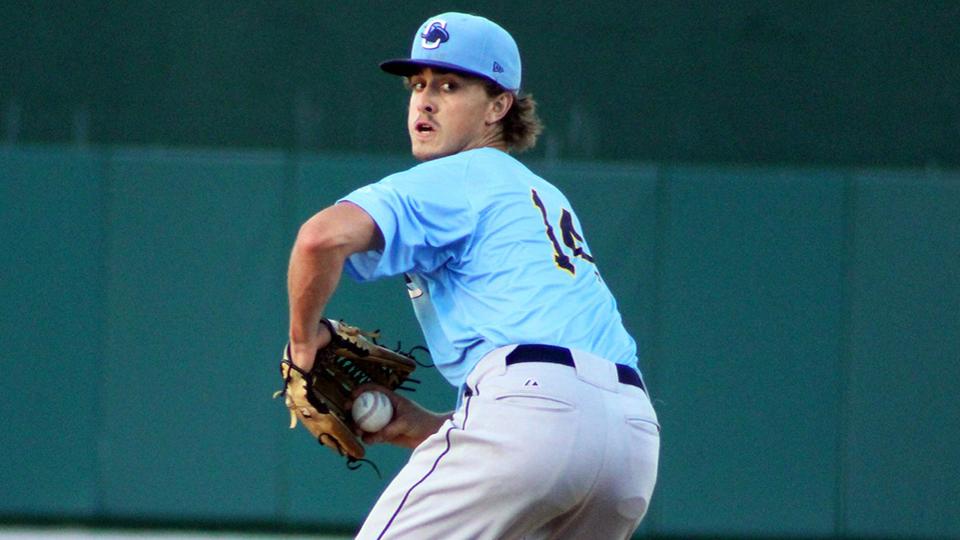 Joe Ryan has fanned 35.9 percent of the batters he has faced over 82 2/3 innings with Class A Advanced Charlotte. (Charlotte Stone Crabs)

Joe Ryan has kept the K's coming all summer long. His latest -- and perhaps most dominant -- effort has earned him more than an improved stat line.

The Rays' No. 16 prospect has been named Florida State League Pitcher of the Week after fanning a career-best 13 batters over seven innings last Wednesday for Class A Advanced Charlotte. This is the second weekly award of Ryan's career after he was also honored by the FSL on June 24.

It was impressive enough that Ryan's 13 punchouts in the Stone Crabs' 2-0 win over Bradenton trumped his previous best of 12, set on April 17 with Class A Bowling Green. But it's also worth pointing out that he faced only 22 batters over his seven frames for a K rate of 59.1 percent. The Charlotte right-hander struck out each of the first seven Marauders he faced before a hit-by-pitch broke up the string in the third inning. He carried a no-hitter into the seventh before Daniel Amaral singled to left field with one out.

With the game (meant to be a seven-inning affair as part of a doubleheader) tied 0-0 going into extras, Ryan was pulled before the eighth, having thrown 93 pitches (62 of which were for strikes). The seven frames also marked a career high, beating his 6 2/3 innings from July 12 against Tampa.

"What separates Joe from some others is his competitiveness," said Charlotte manager Jeff Smith. "I always tell people that strikeouts only come when you get yourself into those two-strike counts. So if you're pitching in a lot of 0-2, 1-2 situations, the results are going to be strikeouts a lot of the time. That's where it starts for Joe. Once he smells 0-2, 1-2 -- which he does often -- then those strikeouts will come."

Taken in the seventh round of the 2018 Draft out of Cal State Stanislaus, the 23-year-old right-hander has been one of the Minors' most dominant starters in his first full season of pro ball. His 159 strikeouts over 110 1/3 innings between Bowling Green and Charlotte trail only Kris Bubic's 163 for the Minor League lead. His 37.2 percent K rate is tops among all qualified Minor League pitchers, including those in short-season levels. He ranks among the top 10 for full-season hurlers (minimum 90 innings) with a 1.79 ERA (seventh), 0.81 WHIP (second), 6.9 K/BB ratio (fifth), .166 average-against (sixth) and a 16.6 percent swing-and-miss rate (fourth).

Unranked at the start of the season, Ryan has risen among Rays prospects on the strength of two above-average pitches: his low-to-mid-90s fastball and impressive curve, though he relies heavily on the heater. He also possesses a changeup and slider, but those offerings have yet to receive the same scouting grades as his other two pitches. The 6-foot-1 righty's stuff plays up because of the deception in his delivery and his ability to consistently hit the strike zone. Ryan has walked only 23 batters over his 110 1/3 innings across two levels this season.

"A lot of it is in that hidden motion," Smith said. "He keeps hitters from picking up the ball until it's right on top of them. ... The mechanics are repeatable on all four pitches, which goes back to the deception too because when he does throw all four, it can be hard to see which is coming. He's as good as anybody at getting strike one to start out the at-bat, and then, it can be really tough on anyone to figure out what is coming next, especially when the ball's coming right on top of them like that."

As of MLB.com's latest update, Ryan is the eighth-ranked pitching prospect in the Rays pipeline behind Brendan McKay, Matthew Liberatore, Brent Honeywell, Shane Baz, Shane McClanahan, JJ Goss and Seth Johnson, but the California native could push higher if more outings like Wednesday's are coming in the final three weeks of the Minor League season. It could all come down to the development of those secondary offerings.

"He's not necessarily fastball-heavy, but always when we talk about pitchers, we have to think about both development and success," Smith said. "A lot of times, these pitchers get here and can really dominate with just their fastball, but we have to think about developing those other pitches too. From the Midwest League to us to everywhere else in the system, it's a group effort to allow him to just get a feel for the slider, the curveball, the changeup. The more he can use those, the more it'll open up some opportunities for him."

Below is the complete list of Minor League Pitchers of the Week for Aug. 5-11: