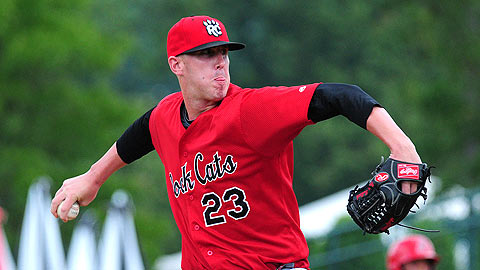 Billy Bullock was selected out of high school by the Dodgers in the 20th round of the 2006 Draft but didn't sign. In 2009, he was taken by the Twins with their third pick -- 70th overall -- as a junior out of the University of Florida.

The 6-foot-6, 225-pound right-hander has moved purposefully through four Minor League levels. In his debut season, he went 4-0 with 11 saves and 45 strikeouts over 33 2/3 innings between Rookie-level Elizabethton and Class A Beloit. Last year was split almost evenly between Class A Advanced Fort Myers and Double-A New Britain as he totaled 27 saves and 105 strikeouts over 74 innings, limiting opponents at the higher level to a .239 average.

Between the lines, Bullock has a plan, but he also has the smarts and flexibility to adapt it and, unquestionably, the focus to achieve his goals.

After he was drafted, his one big-ticket purchase was going to be a new house, but the engine blew in his old truck, "So I ended up having [a new car] and a new house. I didn't want a new car."

Here's what else he told MiLB.com:

MiLB.com: After you, nine more University of Florida players were drafted in 2009. Do you stay in touch with them?

Billy Bullock: Oh, yeah, I stay up with those guys at least once or twice a month, making sure they're doing all right. I'm lucky enough, I get to play with Tony Davis every day, so between me and him, we pretty much stay up with everybody. I keep up with [Patrick] Keating and [Kevin] Chapman and [Matt] den Dekker and all those guys.

MiLB.com: Did switching from starter to reliever cause you to shuffle your repertoire? Or moving up in levels?

Billy Bullock: Yeah, I've actually just got back to where I've started throwing my changeup again. From about my junior year in college until this offseason, I really hadn't thrown it too much, so I'm trying to work that back into the mix, but that's really the only adjustment I've made. You can definitely see that you need a three-pitch mix in Double-A and in the higher levels. I mean the goal is ultimately to get to the big leagues, and every guy up there has got a three-pitch mix, so need to work on it now. It makes your fastball look that much harder.

MiLB.com: A lot of players notice a big difference between Advanced A and Double-A. How did that transition go for you?

Billy Bullock: Well, it was definitely a big transition. The hitters are definitely a lot better, the strike zones are a little bit smaller, the hitters are more selective. I mean, just about anything you could think of, they are that much better in Double-A than they are in [A Advanced]. So, yeah, it took a learning curve to get used to that, to hone my skills to where I could get guys out at that level.

MiLB.com: How do you approach turning things around if you have a couple of bad outings?

Billy Bullock: The thing that works for me -- I try and get away from mechanics and everything like that. I try and just get back to being on a Little League field and just trying to get guys out, not worrying about how I look or what I'm doing wrong. ... You've just got to figure out a way to get it done -- it doesn't really matter what you're doing wrong.

MiLB.com: Were there players who influenced you or who you admired growing up? Have you always been focused on pitching?

Billy Bullock: Yeah, I played outfield growing up and stuff, but I've been pitching since I was 12 or 13. I always looked up to Roger Clemens because just the way he attacked hitters and his ferocity on the mound. Nobody else could match him back then.

MiLB.com: Is there any advice you always carry with you or a particular coach who's made a big difference?

Billy Bullock: Oh, I've had great coaching my whole career, but the two years I spent under [Kevin] O'Sullivan at Florida as my pitching coach, I think, has really -- by leaps and bounds -- helped my career.

MiLB.com: That was when you converted from starter to reliever. How did that come about? Was it based on the roster or your personal development or a little of both?

Billy Bullock: Yeah, that was after my sophomore year, it was after the first year that I played for Coach O'Sullivan going into the second year. We sat down in the office and talked about what would work out for me and the team, and that's what we came up with, and it seemed to work out. We had a lot of young guys that were starters and that had some success coming in as starters. And in college, I really didn't have that much success as a starter, so I think we both realized something needed to change, so we did that. It worked. MiLB.com: Have the Twins already communicated to you any expectation for this season? Do you expect to continue closing?

Billy Bullock: The information that we'll get on that is toward the end of Spring Training. They don't really bring in any of those decisions [yet]. For now, they've always told me that I'm not a closer, I'm just a bullpen guy that happens to pitch late in games. So we'll see what happens. I don't know.

MiLB.com: Without a specific goal from the team yet, what sort of personal goals have you set?

Billy Bullock: Going into every year, you want to make it to the big leagues that year. I mean, I want to be a midseason All-Star, a postseason All-Star in whatever league I'm in and hopefully not spend more than half a year in any of them.

MiLB.com: You're a Florida guy. Have you ever spent a full spring in a cold-weather climate?

MiLB.com: You've seen four levels in two years, are there any cities or ballparks that stand out?

Billy Bullock: Dayton is absolutely a beautiful place to play in the Midwest League -- it's really one of a kind. Yeah, that place is unbelievable, with the fans and all the stuff they do on the field in the game. It's a nice place.

Rob Kuhn is a contributor to MLB.com. This story was not subject to the approval of the National Association of Professional Baseball Leagues or its clubs.