RockHounds right-hander ready for fresh start in second half 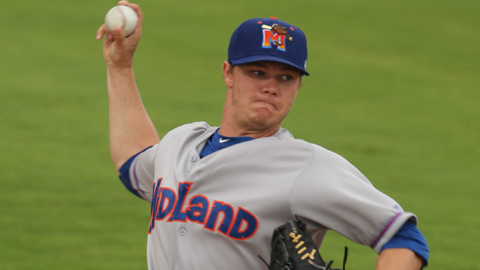 They don't throw out all the records when the Texas League second half begins, so Oakland pitching prospect and Midland RockHounds right-hander Sonny Gray is just going to have to polish up the one he has.

"My season hasn't gone exactly the way I wanted it to this year," said Gray, who is 2-7 with a 5.02 ERA in 16 starts. "I feel like I've thrown the ball better than the numbers kind of show."

There have been good moments within the less-than-stellar stats, but Gray still wants to see improvement that can be measured on paper.

"I learned a lot," Gray said of his first-half experience. "It's my first [full] professional season, so I'm hoping to come back with a good second half and just continue to develop while I'm here."

Gray's best outing was a seven-inning start against San Antonio on April 19 when he gave up one run on four hits and a walk while striking out five in a 4-1 victory. His worst came June 8, when he lasted just 2 2/3 innings against Corpus Christi, giving up six runs on seven hits.

"In the second half of the first half, we kind of focused on some things in the bullpen and side work and tried to transfer it into the game," said Gray, who has zeroed in on on his fastball command more than anything.

It's clear that it's all still a work in progress. Gray gave up six runs on nine hits over five innings in a July 2 loss to Springfield but bounced back to allow two runs on four hits in his last start against Arkansas on July 7.

"They don't chase the breaking ball as much here, which I could get away with in college," Gray said. "I could throw a breaking ball in the dirt and they would swing at it and I'd get a strike. Here not so much -- so you've got to throw your fastball more and throw it for strikes."

Gray committed to Vanderbilt and rejected a chance to play for the Chicago Cubs when they drafted him in the 27th round in 2008. An ankle injury likely didn't help Gray's stock, but he had already decided to go with the Commodores and said he has no regrets.

Gray helped Vandy to its first College World Series last year, and his decision to hold off on pro ball proved sound when Oakland took him in the first round, 18th overall, in 2011.

Vandy has been cranking out Grade-A pitchers lately. David Price went in the first round of the 2007 Draft, and Mike Minor, a former roommate of Gray's, was a first-round pick in 2009.

Now Gray, 5-foot-11, 180 pounds, is carrying the Commodores flag. He had one start in Rookie ball last year before he was promoted to Midland, where he was 1-0 with a 0.45 ERA in five starts.

"I don't know necessarily if you'd call it a fast pace, but I feel like I can compete at this level, and obviously I did last year," Gray said.

One-run blues: The Frisco RoughRiders won their sixth straight game Sunday thanks to first baseman Chris McGuiness' 10th-inning home run in a 5-4 victory over Arkansas at Dr Pepper Ballpark. It was more heartbreak for the Travelers, who out-hit Frisco, 14-13, but lost its 23rd one-run game and its fourth in a row.

Drilling deep: Tulsa is far off the home run pace set by Frisco (89), but in one game Sunday the North Division first-half champion Drillers made a bid to catch up. Tulsa swatted four homers to run its total to 63 in a 7-4 victory at ONEOK Field. Josh Rutledge and Jimmy Cesario went back-to-back to start the third inning and Corey Dickerson and Mike Mitchell each homered in the seventh.

Todd Traub is a contributor to MLB.com. This story was not subject to the approval of the National Association of Professional Baseball Leagues or its clubs.