Planning for 2020 in Jacksonville 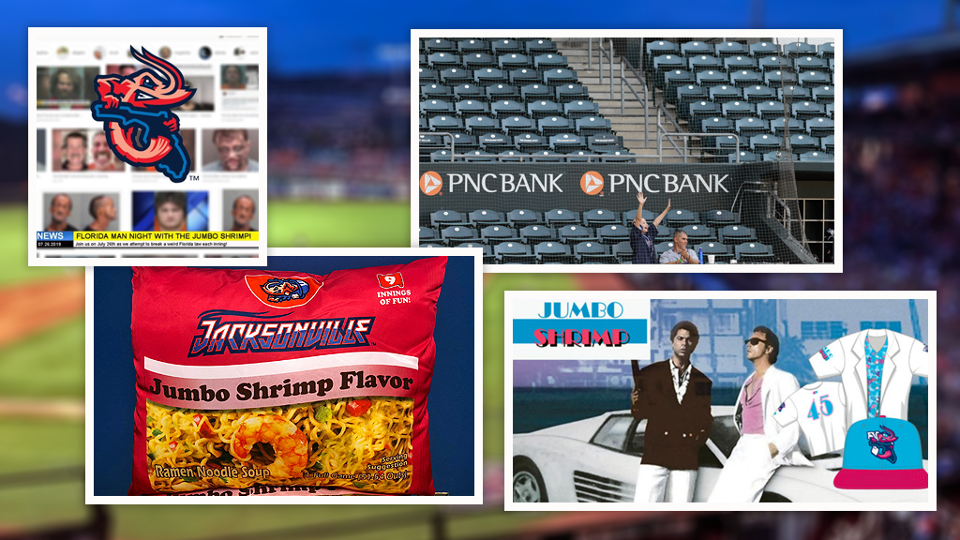 The Jacksonville Jumbo Shrimp staged a wide array of unique and attention-getting promos in 2019. What will they do for an encore?

This is the first article in a multi-part series detailing the evolution of the Jacksonville Jumbo Shrimp's 2020 promotions schedule.

For the Jacksonville Jumbo Shrimp, 2020 began on Oct. 1, 2019. Now is the time to lay the groundwork for the upcoming season.

The Jumbo Shrimp -- Double-A affiliate of the Miami Marlins -- drew 327,388 fans in 2019, their highest total since 2010 (when they were known as the Suns). The team's success at the gate can be attributed, in no small measure, to their robust and creative promotions schedule. Highlights from last season included the "Miami Vice"-referencing Vice Night, Ramen Noodle Appreciation Night, Florida Man Night (celebrating the seamier side of the Sunshine State) and this writer's favorite, a literal "Two for Tuesday" in which a young cancer-fighting fan and his father were the only two individuals admitted through the gates at the Baseball Grounds of Jacksonville.

Executing promotions such as the above and many others over the course of a 70-game home season takes significant advance planning. That formidable task is overseen by director of promotions David Ratz, who joined the Jumbo Shrimp in 2017 following what he referred to as a "midlife crisis career change."

"I did promotions in radio, a cluster of six stations, for 13 years," he said. "It's been surprising how the industries are quite similar. On the promo side, you're saying, 'How ridiculous of a stunt can we do to get attention for the brand, without crossing that line?' It's eerily similar. Both industries have crazy hours and you're dealing with people who want to create as much attention as they can without getting into trouble."

For Jacksonville -- and surely many other Minor League teams -- the work of creating such "stunts" encompasses the entire offseason.

"A week after [the Minor League Baseball Innovators Summit in] El Paso, we had a two-day team offsite [meeting]. We spent the first day [Sept. 30] recapping our successes and struggles from the season, and that closed the book on 2019," said Ratz. "Oct. 1 was the first day of 2020. We spent that whole day brainstorming everything. Not just promotions. Concessions ... or how to word a sales package. It's basically a blank slate. What can we do that's better, that will keep us moving forward instead of being flat? Then, after that, we have some great back and forth on promotions.

"We'll have our first in-house promotions meeting next week. Every person on the staff is tasked with coming in with theme night ideas and at least two activation ideas for that night, whether it's concessions, jerseys, giveaways, musical accompaniment or something on the concourse that feeds into the idea. Everybody on the staff has to come in with something, from the front desk [receptionist] to the owner to the chef."

While this meeting is a creative free-for-all, Ratz and his promotions staff take a pragmatic approach when deciding which ideas to most aggressively pursue.

But even this early in the offseason, time is of the essence.

"The first priority is the giveaway items. We set those first, because of production deadlines," said Ratz. "There are 20 potential items, based on quantity and delivery date, and you want to get that to the sales team ASAP. The ones [produced] overseas have a massively early production deadline. After that, I can start building out the calendar. There's plenty of time to build it out once the giveaways are locked in."

While the details of most Jumbo Shrimp promotions are still very much to be determined, the team is currently focused on one Ratz says will "culminate on Black Friday." This promotion has been teased on social media channels via a pair of silhouette images. "Coming this fall, no shrimp is safe" reads one. "The hero Duval [County] doesn't know it needs," reads the other.

"We're taking character-based theme nights to the next level," explained Ratz. "There are a lot of teams that obviously have played as one-off identities. This is more than that. It's about creating an alternate universe using superhero terminology. We have a great weekend planned around this, early in the season, and it'll evolve from there. But around Black Friday is when it will all be revealed. Hats, shirts, the merch line. All that stuff. Then we'll start telling the stories behind each of the characters, tell the tale of who and what they are.

"It's not just superheroes, but 'Star Wars' and really any theme night that involves characters. You find yourself saying, 'OK, these are the standard characters.' That's awesome, but what's the next step? Do we bring 50 'Star Wars' characters to the park instead of 10, or do we create new and exciting characters that resonate with the audience? That's a fun route to go down."

Ratz's comments speak to a team philosophy, which largely comes down to this: Why do something old when you can do something new?

"I think that, if it's not a new idea, you can always add one more thing to a promo night," he said. "Obviously, everybody brings back old favorites, the tried and true, but adding or changing things up is the goal. Over the three years I've been here, one-third [of the promotions] are returning. They're turnkey, easy to do and they move the needle. But my goal is to do at least two-thirds differently than the year before, so that the show is different."

Opening Night in Jacksonville is six months away. The Jumbo Shrimp have their work cut out for them, however, as 2019's promotions schedule will be a tough one to top.

"Obviously, the [literal] Two-for-Tuesday was a staff favorite. It was, by no means, a moneymaker but something that was really cool and special. Everyone was touched by that evening," said Ratz. "After that, Florida Man resonated. It was nuts. Unless you're in the Florida State League or a couple of other teams, you can't do that. It was nice to do something local that still got national attention, something that the town could really rally behind. And the way our Vice Night took off, creating something that resonated and having the merch fly off the shelves, it was really cool to stumble upon something like that.

"With all these things, it's like, 'OK, cool. People loved it, so let's do it again. But it all needs to be bigger, better and different.'"