Tides Sail Away With Win 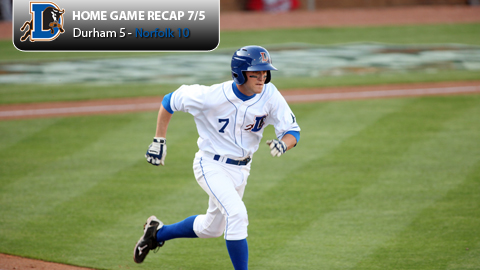 DURHAM, NC - The Norfolk Tides smashed four home runs to help them earn a split in a quick two game series at the DBAP, cruising past the Bulls 10-5. Bill Hall collected four RBI as the Tides pulled even in the season series with Durham, as the division rivals have each won five games against one another.

Norfolk jumped out to a quick lead in the first, with Nate McLouth scoring on the first of Hall's four RBI. Alex Torres (3-4, 6.84) then allowed a 2-run shot over the Blue Monster to L.J Hoes, extending the deficit to 4-0. The left handed pitcher struggled through his three innings of work, taking his fourth loss of the season.

Tommy Hunter (2-0, 4.50) looked nearly unhittable until the top of the third inning when the Bulls scratched out a run thanks to back-to-back singles from Cole Figueroa and Jesus Feliciano. In the following frame, Brandon Allen and Henry Wrigley launched back-to-back solo home runs to pull the Bulls to within one.

Hall replied to Durham's rally with a 3-run shot in the fifth, his tenth of the season. Trailing 7-3 in the sixth, the Bulls knocked Hunter out of the game with two runs. Right when it looked like Durham could muster the offense to rally all the way back, Lew Ford and McLouth clubbed back-to-back home runs in the eighth, securing the 10-5 victory for Norfolk. The Bulls failed to complete the mini-sweep of Norfolk, losing out on an opportunity to gain more ground on the second place Tides.

Durham travels south tomorrow on I-85 to take on the Gwinnett Braves in the final series before the All-Star break. RHP Todd Redmond (6-5, 3.23) takes the hill against RHP Matt Torra (7-6, 4.43) in the series opener. All road games can be heard live on the radio homes of Durham Bulls Baseball, 620 The Buzz or 99.9 HD-3 The Ticket.