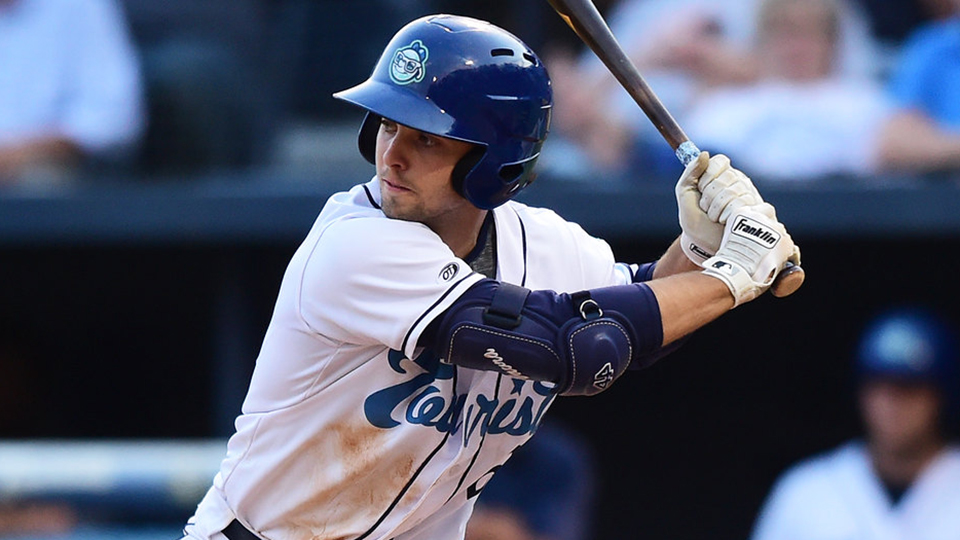 Terrin Vavra had 32 extra-base hits at home for Asheville compared to only 11 on the road. (Kevin Pataky/MiLB.com)

Toolshed's series on park factors moves on to its final 2019 segment this week with the two Class A leagues, after covering Triple-A, Double-A and Class A Advanced. The Midwest and South Atlantic Leagues represent the first steps for many Minor Leaguers on their journeys to navigating full-season ball for the first time, and unlike some of the higher circuits, they're pretty comparable to each other, if a little pitcher-friendly.

This is how both leagues measured up in 2019 with each league's rank among the 16 domestic Minor League loops in parentheses and the average of those 16 included at the bottom.

Both leagues are just a smidge below the domestic Minor League average in all three categories and within 0.1 of each in the three as well. This isn't Triple-A, where offense mushroomed in 2019, or Class A Advanced with its polar differences in the California and Florida State Leagues. Class A is where hitters and pitchers alike can get a relatively fair shake.

Then again, "relatively" is an important word there. Because even though the Midwest and Sally Leagues are fair on the whole, individual parks differ between the hitter- and pitcher-friendly spectrums. Time to explore those spectrums with park factors. Each factor is put on a scale in which 100 is considered average. Anything above that favors hitters. Anything below makes the park more pitcher-friendly in that category.

The run and hit columns are close together within the 90-110 range. That is to say, few Midwest League parks are more than 12-13 percent hitter- or pitcher-friendly when it comes to runs and hits. That's a promising sight for the fairness of the league as a whole. In other words, there is no Lancaster's The Hangar here.

Clubs differ drastically in the home run column. Lake County's Classic Park is the best place to see dingers in the MWL with a home-run factor of 144 over the three-year span. In 2019 alone, 110 balls were sent out of the yard in Captains home games, compared to only 76 on the road. Cedar Rapids and Lansing -- 103 each -- were the only other MWL hosts with more than 100 long balls in their home games, and each of those squads had one more home game (70 vs. 69) than Lake County this past season.

At the other end, West Michigan's Fifth Third Ballpark is where homers have gone to die the past few seasons. There were only 49 dingers hit by either team in 70 Whitecaps games this season, 11 fewer than in home games for Kane County and Quad Cities -- their next-closest competitors with 60 long balls at home.

Overall, Great Lakes' Dow Diamond suppresses offense overall unlike any other park in the Midwest League, and Loons batters quite obviously suffered. As a club, Great Lakes led all Midwest League clubs with a collective .767 OPS in road games, and it wasn't close. Lansing was second at .704. However, the Loons only managed a .691 OPS at home. That's still a feat that they could rank eighth despite their home park factors, and the club finished first overall at .729. But it's more fun to imagine what numbers this collection of Dodgers' Class A prospects could have put up had they called somewhere a little more fair like Bowling Green or Peoria home instead.

Bo Naylor: The 29th overall pick in the 2018 Draft moved to Class A to open his first full season and seemed to grow more comfortable as the season went on, finishing with a .243/.313/.421 line and 11 homers in 107 games. But there's no doubt the Indians' No. 5 prospect got a little bit of a boost playing for Lake County. The left-handed slugger belted seven of his 11 homers at home and finished with a .448 slugging percentage in 54 games there, compared to .396 on the road. Naylor's extra-base-hit output was relatively the same between the two scenarios -- 19 at home, 20 on the road -- but when he was able to punish the ball, it was much more likely to go beyond the fence in his own friendly confines. A move to Class A Advanced Lynchburg could see a reversal of fortunes in 2020.

Jacob Amaya: After the Great Lakes blurb above, some Dodgers farmhand had to appear here. The No. 13 Dodgers prospect is as good an example as any. Amaya led all Loons qualifiers and ranked eighth in the MWL with a .775 OPS over 103 games with Great Lakes, and he deserves bonus points for even reaching those heights. Amaya amassed only two taters and 14 total extra-base hits in 50 games at home and produced a .251/.374/.361 line in those scenarios. Compare to his .271/.387/.424 mark, four homers and 21 extra-base hits in 53 road contests. Amaya's strength -- at age 20 -- was his league-best 15.7 percent walk rate, but when he did make contact, he had a much better chance to put up numbers away from the Dow Diamond.

Wenceel Perez: Perez entered the season as the Tigers' No. 12 prospect, coming off two years in which he hit above .300 while showing plus speed and a slick glove at shortstop. In 2019, his stock slipped because a rough year with the bat. His .250/.312/.369 line and three homers in 62 games on the road didn't impress, but his home numbers -- .215/.286/.256, no homers in 62 games -- were even more rough. Even if Perez repeats Class A, he'll have West Michigan's cushy Fifth Third Ballpark waiting for him, and that won't be a welcome sight.

Before getting into other topics here, it's important to note the one Class A club to change stadiums within the three-year window. The Augusta GreenJackets said goodbye to Lake Olmstead Stadium after the 2017 season and opened up SRP Park for the 2018 campaign. As a result, the Giants' Class A affiliate went from the Sally League's most pitcher-friendly stadium to ... a slightly less pitcher-friendly stadium. SRP Park still stands below the Sally League averages, but it's a far cry from 2017, when only 37 homers were hit at Lake Olmstead Stadium compared to an incredible 91 in Augusta road games.

In terms of the other extremes, Asheville has long been held up as the bandbox of Class A, and the numbers tell no lies there. That was especially the case in 2019, when there were a combined 813 runs scored in the 70 games played in Asheville. The average of 5.81 runs scored per team per game was just below the average of 5.85 scored by Pacific Coast League teams. Essentially, Asheville's McCormick Field brought PCL baseball to the Class A level, at least in terms of offense. Even then, Greensboro, Hickory and Lexington had higher home-run factors over the long term than Asheville did, though none of the three touched the Tourists' home park in the three-year runs scored factor.

At the other end, hitters typically dread heading to Lakewood's FirstEnergy Park on the Jersey Shore, and that was no different in 2019. There were 458 runs scored in Lakewood home games -- 355 fewer than in Asheville games -- and the gulf in home dingers (47) from road dingers (106) was equally stark. One of those 47 long balls came from 2019 top overall pick Adley Rutschman on Aug. 27, but it sometimes takes that level of talent to put the ball out of the park in Lakewood.

Terrin Vavra: The 2018 third-rounder out of the University of Minnesota undoubtedly got his full-season career off to a strong start, hitting .318 and finishing with an .899 OPS -- both second-best in the Sally League -- over 102 games with Asheville. But it would have been better to see what the Rockies' No. 7 prospect could have done elsewhere because he certainly took advantage of playing at McCormick. The left-handed-hitting infielder put up an astounding .400/.484/.640 line with eight homers and 24 doubles in 53 games at home this season. His numbers on the road were much more pedestrian and even below-average -- .224/.320/.316, two homers, one triple, eight doubles in 49 games. Vavra is likely headed for another hitter-friendly park in 2020 at Class A Advanced Lancaster, and he'll be tested to make his numbers take off once again at The Hangar.

Luis Garcia: Garcia is essentially the Phillies' version of Perez, although he had a little more hype coming in 2019. The 19-year-old shortstop was a Gulf Coast League standout in 2018 after batting .369 with a .921 OPS in 43 games at the complex level. Philadelphia liked enough of what it saw to jump him straight to Lakewood, only to have the Dominican Republic native take a step back with a .186/.261/.255 line overall. Garcia's numbers either home or away weren't great in 2019, but it's notable that three of his four homers came on the road and he slugged 30 points lower (.269 vs. .239) in home games with the BlueClaws. Garcia can throw away 2019 as a lost season given his age -- he just turned 19 in October -- but the 2020 campaign could be another uphill battle with more games in Lakewood.

Mark Vientos: The Mets named Vientos -- with a .711 OPS -- their Minor League Hitter of the Year, and based on splits, they were on to something. New York's No. 6 prospect hit just .240/.290/.360 in 61 games at Columbia's Segra Park, but those numbers took off to .272/.311/.471 in 50 games on the road. Eight of his 12 long balls came away from the home of the Fireflies. That's the same number of South Atlantic League road homers as No. 85 overall prospect Triston Casas, who finished with 19 dingers overall during his time with Greenville. Vientos' best offensive tool is his power, and that tool should shine more the further away he gets from a pitchers' park like Columbia.