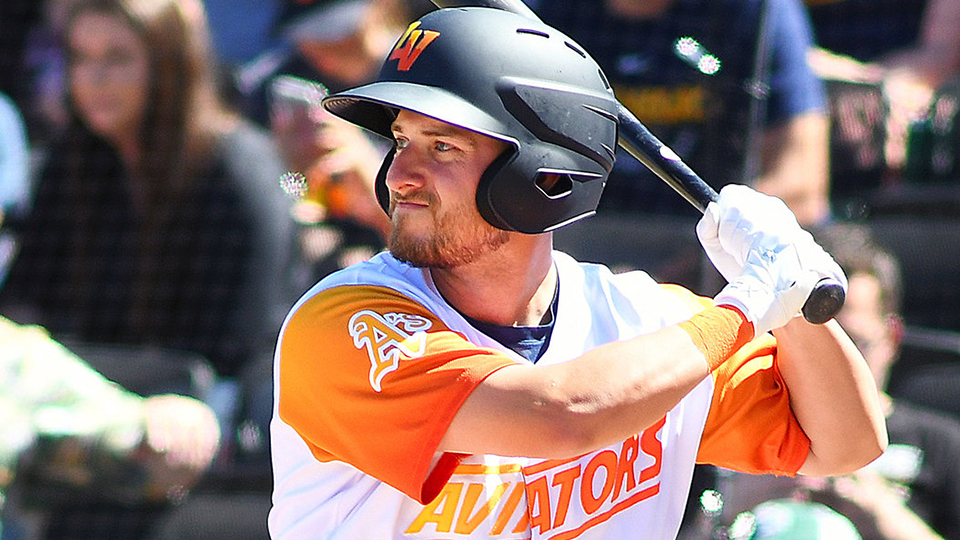 During the last month, Mark Payton developed a joke with his friends and family back home in Illinois.

"I've got to be getting close to the record for the most times drafted," he said. "This has to be close."

A 31st-round pick of the Twins out of high school in 2010. A 16th-rounder of the Indians out of the University of Texas in 2013. A 2014 seventh-rounder of the Yankees out of Texas again in 2014. A Rule 5 Triple-A phase selection of the A's last offseason. And heading into the 2020 season, a Rule 5 Major League phase pick of the Reds.

This fifth opportunity comes with exciting stipulations. If this one is indeed to be the charm, Payton will get his first Major League shot this spring and stick on Cincinnati's 26-man roster for the duration of the 2020 season. Otherwise, he'll have to be offered back to Oakland. Unless that happens, for all intents and purposes, he'll remain a Major Leaguer and have earned that designation because of a breakout 2019 season.

As expected of an outfielder checking in at 5-foot-8, 190 pounds, Payton wasn't known for his power through most of the last decade. The left-handed slugger hit only seven homers over four seasons on campus in Austin, where he was much more celebrated for a 101-game on-base streak. Entering 2019, his Minor League career high in dingers was 10, which he hit in 2016 between Class A Advanced Tampa and Double-A Trenton.

At a time when power was increasing across the game, Payton hadn't been able to keep up, only because he says he had been trying too hard to follow another movement in baseball.

"I was trying to lift the ball and usually ended up elevating too high," he said. "So last offseason, I kind of learned that naturally, with my swing, the ball will elevate anyways. If I'm sticking gap-to-gap trying to hit line drives, the power would come anyways. So in cage work, early on-field stuff, batting practice, machines, all that stuff, I just kept trying to hit line drives instead of home runs. I was swinging under the ball for so long, instead of letting the ball travel on its own. Lowering my sights and keeping on the ball more, I didn't have as many mis-hits."

It didn't take long for the A's to see Payton's pop take off in his assignment to Triple-A Las Vegas. The 28-year-old homered in each of his first four games with the Aviators. He entered the Triple-A All-Star break in early July having tied a career high with 10 homers and sporting a .312/.380/.558 line over 69 games. Part of that was playing in the hitter-friendly Pacific Coast League (and an extremely offense-oriented park in Vegas), of course -- as well as fitting with the trend of increased offensive numbers across Triple-A in 2019 -- but Payton was able to take advantage of those factors because of adjustments he made or was helped to by the A's.

"A lot of it came down to those changes last offseason," he said. "More control over the barrel. Seeing the ball deeper. Keeping the barrel in the zone longer. But Oakland was also big on being able to self-evaluate and identifying which pitches I was hitting good and which pitches I was hitting bad and going month to month with that process. I had to wait for that to happen, wait for my pitch. In the past, I could get first-pitch-swing-happy. I needed to relax myself, and as the season went on, I knew what pitches I was doing best against, with the A's help, and going after those more often."

As he grew comfortable with that swing change and approach, Payton enjoyed another production uptick in the second half. He went deep 20 times over 49 games after the All-Star break, hitting .361/.425/.767 over that span. With 30 total homers for Las Vegas, he tripled his previous career high. His .653 slugging percentage was more than 200 points above his previous full-season best (.423 in 2016), and his 1.053 OPS represented the first time that number exceeded .800 over a full Minor League campaign.

The Chicago-area native had finally found his power base.

"I don't want my hands getting away from my body," he said. "The tighter I am to my body, the lower I can keep the barrel and the better everything plays. The more I got used to it, the more productive I could be. Really for me, hitting never feels the same. But if I can get back to that short bat, it always gave me confidence. I can still always let the ball get deep and make a quick turn. That's what gets me back on track, I've found."

Oakland didn't come calling with a September promotion when rosters expanded and chose not to protect him ahead of the Rule 5 Draft, but another opportunity did arise late last year. Payton's breakout put him on the USA Baseball radar for the Olympic qualifications at the Premier12 tournament, and the veteran outfielder was added to a loaded roster that featured top prospects Jo Adell, Andrew Vaughn, Alec Bohm and Drew Waters, among others. Payton's .791 OPS over two rounds in Tokyo and Guadalajara ranked fifth on the club that finished fourth behind Japan, South Korea and Mexico. He went deep twice, showing his pop plays outside the PCL.

Before the Rule 5 Draft, his performance abroad was as close as he'd come to the bright lights of baseball's biggest stage. It may have prepared him for the roster battle to come.

"Especially when we played Japan in front of 38,000 people, there were always these loud, constant cheers. It was a crazy, cool atmosphere," Payton said. "The more games that you're a part of like that, the more the nerves settle. You can just play baseball. And then in the bronze-medal game loss to Mexico, there was a trip to the Olympics on the line. It was a game that mattered. People forget in baseball, there are 162 games, but you could miss out on the playoffs by just one. Every game matters. If I can help a team win in a situation like that and get more and more comfortable, it's only going to be a good thing."

Roughly a month after Premier12, the Reds selected Payton with the sixth overall pick in the Rule 5 Draft. At the time, the club was light on left-handed bats, especially in the outfield, and Payton -- who batted .357/.417/.697 with 24 homers off right-handers in 2019 -- could help fill that need. Times have changed, however. On Wednesday, Cincinnati signed Japanese outfielder Shogo Akiyama to a three-year, $21-million contract. Like Payton, Akiyama is left-handed, and given the level of investment, he'll likely get longer looks this spring and have a better shot at claiming a spot in the starting nine. That leaves Payton to fight it out with Aristides Aquino, Jesse Winker, Nick Senzel, Josh VanMeter, Phillip Ervin and possibly even two-way player Michael Lorenzen for time on the grass. In Payton's favor is his experience at all three outfield spots, but that's a bit of an uphill battle for a player who can't be optioned to Triple-A without being offered back to the A's.

"Obviously, every move they make has repercussions," he said. "My guess is [Akiyama] is an everyday guy. They call him Sho-Time, after all. But I don't like playing GM. I honestly don't know where everything stands. All I can do is put myself in the best possible situation to help them win games. Hopefully, I can learn from him, pick his brain and have good relationships with everyone down there. We're all part of the same team."

Even if the odds look long for a Rule 5 player like Payton, he's been up against this before. Speaking to MiLB.com in November, A's coordinator of instruction Ed Sprague said after taking Payton in the Triple-A phase of the Rule 5 Draft last offseason, Oakland viewed him as "this little guy who was going to be a fourth outfielder in Vegas, and he goes out and hits 30 homers."

If Payton can beat expectations again, the fifth time really will be the charm.

"For me, I want to be ready to show them right away in Spring Training," he said. "I have no weeks to waste down there."