What fans may have missed from World Series systems in 2019 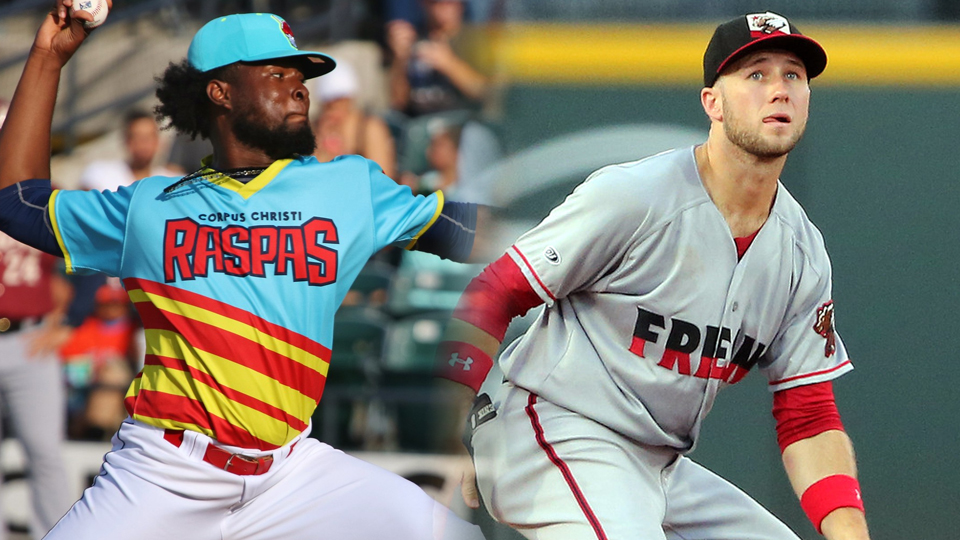 All eyes on Houston and Washington.

It's an underrated beauty of the World Series. Since the first days of pitchers and catchers reporting in February, there's been a broad focus on all 30 Major League organizations, but for at least four games and as many as seven, the baseball world coalesces around only two -- in this case, the Astros and Nationals.

Obviously, both clubs have been mightily successful in 2019, and that extends to the Minor Leagues. It's no secret Yordan Alvarez and Victor Robles graduated from the rookie ranks to play significant Major League roles, including a likely award-winning performance from the former. It's also no secret Forrest Whitley struggled to ascend due to poor performance and shoulder issues after opening the season as one of the most promising pitching prospects in the game.

But what did the baseball masses perhaps miss from the farm systems of the American and National League pennant winners? This week's Toolshed reviews their 2019 season by picking five Minor League storylines from the Astros and Nationals that the wider community might not have seen.

1. Josh Rojas' surge going into trade: Much has been made since July 31 of Houston's ability to add Zack Greinke to the rotation mix alongside Gerrit Cole and Justin Verlander via a trade with Arizona, both from a financial sense and a prospect sense. But it's worth wondering whether it could have been pulled off had it not been for a 2019 breakout by Rojas. Taken in the 26th round of the 2017 Draft out of Hawaii, the 25-year-old third baseman hit eight homers, stole 38 bases and finished with a .760 OPS across two levels in 2018. At the time of the trade, he sported a .315/.403/.575 line with 20 homers and 32 steals in 97 games between Double-A and Triple-A. According to a story by Ben Reiter of Sports Illustrated, the D-backs and Astros had settled on Seth Beer, J.B. Bukauskas and Corbin Martin -- all current or former Top-100 prospects -- but it was Rojas' inclusion that pushed Arizona over the line to get the deal done. It's possible the Astros could have found a separate fourth piece to add to the mix, but the deal couldn't have been done as is without Rojas' jump, especially in the power department.

2. Quad Cities road show: This didn't go missed for anyone in the Midwest League, but the beginning of the season feels so long ago that other Minor League fans may have forgotten it, if they saw it at all. Houston's Class A affiliate played only three of its first 43 games at home after Mississippi River flooding surrounded Modern Woodmen Park in Davenport, Iowa, for much of April and May. What was even more shocking was the way the River Bandits performed. The club went 29-14 in that 43-game stretch before returning to a regular home schedule on May 24 en route to the Western Division first-half crown. It wasn't the most prospect-laden squad in those early days -- 2018 third-rounder Jeremy Pena was the biggest name -- but credit is due to the batch of road warriors.

3. High-K efforts of Cristian Javier, Luis Garcia: As a system, the Astros were fairly middling when it came to strikeouts as their full-season hurlers ranked 13th among all 30 farm systems. But that wasn't for lack of trying from the club's No. 9 prospect Javier and No. 29 Garcia. Garcia led all Minor League pitchers with at least 100 innings with a 38.1 percent strikeout rate between Quad Cities and Class A Advanced Fayetteville while Javier placed third at 37.3 at the upper three levels of the Minors. There were 436 pitchers to qualify by those standards, for the record. Of the pair, Javier has the better stuff with his fastball, slider and curve all earning above-average grades while Garcia relies more on mid-90s velocity and an above-average changeup. Either way, the pair combined to fan 338 over 222 1/3 frames, adding some excitement on the mound to a system that could use it following the departures of Martin and Bukauskas and Whitley's struggles.

4. Tri-City catching duo of Korey Lee and Nathan Perry: Because of its Major League success, Houston hasn't had the opportunity to make high Draft picks in recent years. The Astros went the college route with their first pick at No. 32 overall in June, taking Lee out of Cal, and the 21-year-old backstop showed off a strong offensive profile from the jump. Lee batted .268/.359/.371 with 13 extra-base hits and eight steals over 64 games at Class A Short Season Tri-City, where he joined a team that already had a strong offensive catcher. Perry, a 2017 fifth-rounder out of a Virginia high school, was a New York-Penn League All-Star this season -- he won MVP honors at that contest in Staten Island -- and finished with a .244/.354/.462 line in 67 games. His 12 homers tied for second-most on the circuit. While that slash line may not pop out, the only four Astros prospects with higher wRC+s than Perry's 145 (minimum 250 plate appearances) were Beer (172), Alvarez (170), Abraham Toro (157) and Rojas (151). Lee's 122 placed 12th among the 48 qualifiers. Houston employs a pair of veterans behind the plate in Martin Maldonado and Robinson Chirinos -- both of whom are free agents this offseason -- so the future of the position is up in the air. There could be hope that No. 3 prospect Lee or the currently unranked Perry could claim that when they reach full-season ball in 2020.

5. Dwindling down to one Top-100 prospect: When Kyle Tucker graduated from rookie status on the last game of the Major League season, the Astros found themselves in an unusual position. The organization is down to only one Top-100 prospect in Whitley at No. 16. That ties them with the Brewers, Angels and Red Sox for the fewest among all 30 farm systems. That's not exactly a worry for a club entering its second World Series. There's also a lot in play here. Trades cost prospects. (Beer would give Houston a second Top-100 prospect if he was still around.) Success costs Draft position. It's a cycle, and with the core of Carlos Correa, Jose Altuve and Alex Bregman still years from free agency, Houston won't have major holes to fill for a while (the exception perhaps being Cole's free agency this offseason). But at some point, breakouts like the one from Rojas will be needed to find value from the farm system as it is presently constituted.

1. Aaron Barrett leading the Minors in saves: Barrett was one of the feel-good stories in baseball this year for good reason. Arm injuries had knocked him out for all of 2016 and 2017, and in 2018, he made 20 rehab appearances with Class A Short Season Auburn. He returned to Double-A Harrisburg to begin 2019 and eventually cracked the Majors for September roster expansion with his callup video going viral online. All of that was known. Less publicized was the fact that his 31 saves in 34 opportunities for the Senators led all of Minor League Baseball. No one else had more than 23. Closers aren't as big of a deal in the Minors with organizations wanting relievers to get exposure during different innings and situations, and it makes sense Barrett would assume the role for Harrisburg, given his previous experience and age at 31. But to see him close out games with such efficiency just added another layer to an already impressive comeback story.

2. Matt Cronin post-Draft: Speaking of the bullpen, the Nationals' Achilles' heel during the Major League season was their relief corps, and the club may have made a long-term play in fixing that by taking Arkansas left-hander Cronin in the fourth round of this year's Draft. The 22-year-old southpaw is already the club's No. 11 prospect because of his plus fastball and plus curve, each of which have been noted for spin rates, even though he'll be tied to the bullpen in all likelihood. The former Razorback showed he can thrive in the pro ranks in that role, posting an 0.82 ERA with 41 strikeouts and 11 walks in 22 innings for Class A Hagerstown. Cronin, who fanned 131 over 94 1/3 frames during his NCAA career, has all the makings of a quick-climbing reliever and deserves Washington fans' attentions going into 2020.

3. The Fresno/Harrisburg conundrum: The Nationals were placed into a fairly awkward position coming into the year when former Triple-A affiliate Syracuse switched to the Mets. (There was a good reason for that. New York owns the Syracuse club.) By the time the game of musical chairs had settled, Washington was left with a Triple-A affiliate in Fresno -- a six-and-a-half hour flight from D.C. Instead, the organization moved more of its Major League-ready talent to Double-A Harrisburg, where they could more easily make the jump to the Nats or other Eastern-based Major League parks. That's how players like Barrett, Michael A. Taylor, Erick Fedde and Spencer Kieboom spent a good portion of their Double-A seasons. They were basically on the taxi squad. That's not to say some good talent didn't go to Fresno (more on that later), but the ones Washington wanted ready at a moment's notice mostly stayed east. At season's end, the average age of a Harrisburg position player was 25.2 years old, above the league average of 24.0, while pitchers on the team averaged 25.9 years old, topping the circuit's mark of 24.3. The Senators were, by far, the oldest Eastern League club in 2019, and that might not change for 2020. The Nationals' player-development contract with Fresno runs through next season, so perhaps expect more of the same.

4. Luis Garcia's August surge: Garcia entered the season as MLB.com's No. 75 overall prospect and seemed primed to be the next big Washington prospect to make the jump on the strength of his plus hit tool and above-average speed. The Nats liked enough of what they saw to send Garcia to Double-A at age 19, only to see him struggle. He finished the season with a .257/.280/.337 line and only four homers over 129 games. But while some may have been writing off the middle infielder's year, the left-handed slugger did get hot down the stretch. Garcia batted .278/.288/.470 over 27 games in August. His .758 OPS in that stretch was his highest of any month this season, and 14 of his 30 extra-base hits came in that month alone. Because of his age, it would be easy to chalk this up as a developmental year, but Garcia showed enough actual performance down the stretch to relight the fire of excitement in his profile. Washington's No. 2 prospect is now in the Arizona Fall League, where he is hitting .294 with a .749 OPS and carrying at least some of his late-season momentum with him.

5. Carter Kieboom is still a prime prospect: Speaking of writing someone off, the top Nationals prospect's debut in the Majors couldn't have been much rougher. Washington had dreams of Kieboom taking over an infield spot with Trea Turner injured in late April, only to see the then-21-year-old go 5-for-39 (.128) with four errors at shortstop over 11 games. He was optioned back to Triple-A Fresno on May 7 and wasn't brought back up the rest of the way, even when rosters expanded in September. If that's when any fan last looked at Kieboom, then they missed out on a promising season for the 2016 first-rounder. Kieboom was a Pacific Coast League end-of-season All-Star, finishing with a .303/.409/.493 line and 16 homers in 109 games with the Grizzlies. His 123 wRC+ ranked 17th among 78 PCL qualifiers, despite the fact he was the youngest player to reach the at-bat threshold. Because of the above-average nature of his hit and power tools, Kieboom remains the No. 20 overall prospect. The re-emergence of Howie Kendrick in the Nats infield likely kept Kieboom from getting more Major League playing time in 2019, but make no mistake, he should be a much bigger contributor in 2020 and beyond.