Indians infielder rounding into Top-100 prospect at Class A 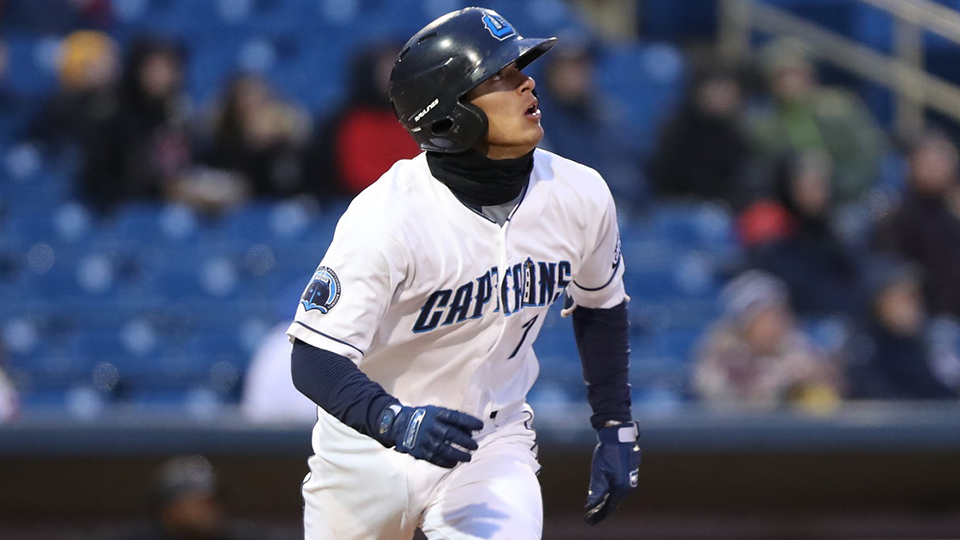 The Indians front office came to Tyler Freeman last fall with an idea. Well, it was more of a suggestion.

"We had so many meetings in the offseason, but the one I remember they told me, 'This isn't a big concern at all, but, hey, maybe your walk rate could be better,'" he said. "They didn't even want me to change much. They told me I put the ball in play a lot, and that made up for pretty much everything. But I'd call it a 'maybe' concern, and I took that as, 'OK, that's what I need to focus on now.'"

No matter the severity of the instruction, the 19-year-old infielder took it to heart and spent his first healthy pro offseason -- he was nursing a torn labrum in his left shoulder during much of the prior one -- working out with a pitching machine that simulated a live pitcher using different windups, arm angles and pitches. His focus was on developing an approach that would keep his above-average hit tool yet reel in some of his aggression.

The Indians' No. 3 prospect has seen his walk rate jump from 2.7% last season at Class A Short Season Mahoning Valley to 10.6% through 30 games this season at Class A Lake County. Meanwhile, he's still batting .293/.418/.483 over 141 plate appearances. Consequently, Freeman has jumped into MLB.com's Top 100 Prospects ranking, at No. 96, for the first time as he becomes a more well-rounded offensive threat.

"It was probably around Spring Training, honestly, that I noticed the changes that quickly," he said. "There were a couple times when I looked at a pitch and knew it was a ball and thought right after, 'Hey, if I was at Mahoning Valley, I'm probably swinging at that pitch or fouling it off.' Already, I was recognizing that that's actually a ball, let it go, and I realized this was going to work."

It didn't take long for those results to carry into the season, either. Freeman took a free pass in five straight games from April 7-12, a stretch beginning with the third contest of the season. On April 25 alone, he walked a career-high three times. When it comes to raw totals, his 15 walks this season are already almost double his 2018 total of eight in 41 fewer games.

What makes all of this so noteworthy is that the middle infielder was already gifted at the plate before adding more plate discipline to the mix.

The Indians took Freeman with the 71st overall pick in the 2017 Draft on the promise of his bat, and following his return from shoulder surgery last spring, he showed off that promise in the New York-Penn League, where he was one of the Class A Short Season circuit's most dominant hitters. Freeman led the NYPL with a .352 average, .929 OPS, 95 hits, 29 doubles and 138 total bases. He especially blew the competition away in those last three categories, with second-place hitters finishing with 71 hits, 18 doubles and 123 total bases.

So when Cleveland brass came to Freeman in the offseason to talk about his preparation for the jump to the Midwest League, there really wasn't much they could say, other than "maybe" the whole walk thing. If they were being picky. But the reason the California native has been able to stop swinging at so many pitches but still make regularly solid contact is perhaps his most elite skill.

Of the 1,295 qualifiers across the Minors last season, Freeman had the second-best swing-and-miss percentage at just 3.0%. Even with the jump to Class A, he's still swinging and missing only 3.3% of the time through mid-May, ranking fourth among 888 qualifiers in 2019.

"I'm still the hitter that I am and always have been. I'm still going to be very aggressive," he said. "The only thing that changes is trying to get my pitch and hitting that. I saw a video of Ted Williams in the offseason and just the other day again on Instagram, where he talked about the reason he was so good was because he was going to only swing at his pitch. Anything that wasn't his pitch, he was going to let it go. It's baseball. You've got three strikes. Don't just jump on what you see."

Other unknowns remain in Freeman's profile. He has split time between shortstop and second base for much of his Minor League career, only to make 30 of his 31 defensive starts at shortstop with the Captains this season. That's in part because his usual double-play partner, Jose Fermin, has been on the injured list since April 26, allowing Freeman to take over full-time duties at short for the time being. The teenager is still taking grounders at second in preparation for Fermin's return -- as well as for his long-term future, as many believe his average arm will work better at the keystone. His power is also mostly in the gaps at this stage of his development. His 12 doubles are second-most in the Midwest League, but he's paired that with only two homers in 116 at-bats so far.

But as of now, Freeman's elite contact rates and improving discipline are commanding attention from across the Minors, as evidenced by his recent jump into MLB.com's ranking. That's not something he envisioned two years ago, when he had a strong commitment to TCU and decided to turn down three pre-pick offers from the Tribe on the first day of the Draft only for Cleveland to take him anyway and sign him for $816,500 just before the deadline.

Had he stuck to his original plan, Freeman would be a sophomore shortstop sitting atop the Horned Frogs lineup. Instead, he's becoming one of the best pure hitters in the lower level of the Minors, with his sights set on being even a little more than that.

"This early on? No, I hadn't thought I'd necessarily be here," he said. "I always knew I had the work ethic to improve over time, and I've always given it all I've got. So far, it's showing up in results. But I'm not going to take this for granted. It's been an honor to see myself recognized liked this, but all it does is make me want to work harder.

"I'm not big on prospect lists, reading them and keeping up with them, but I do get texts from family members and friends, so it's hard not to think about it. But whether I'm No. 1 on those lists or the last guy on there, I'm going to strive to get better, however I can on whatever I can improve in my game."