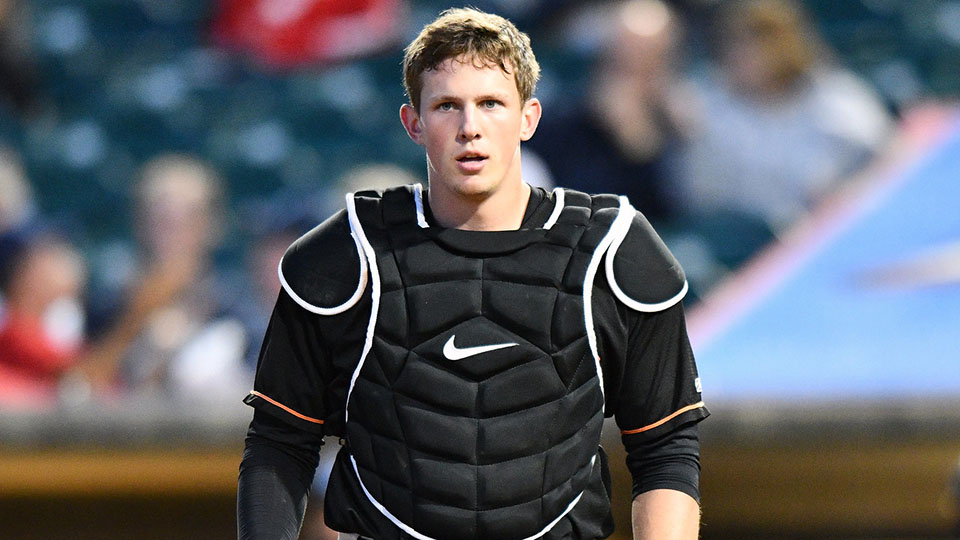 The whole point of the Minor Leagues is to climb the ladder, one step closer to the Majors. Whenever that step happens is special.

Of course, some times are more special than others.

Every season, Major League organizations elevate some of the game's top prospects during the final month of the season, just in time to help some Minor League clubs push toward the playoffs. It's not unlike bringing in a ringer for a pickup game, if that ringer was super-talented but also needed to learn the lay of the land of the new neighborhood at the same time. This edition of Toolshed picks a heralded prospect from each Minor League circuit beginning its postseason Wednesday who's been moved up after Aug. 1 and ready to make an impact on his new club's push for a ring.

International League: Cristian Pache/Drew Waters, OFs, Gwinnett -- Promoted from Double-A Mississippi to Triple-A on Aug. 5, the Braves' top two prospects immediately improve the defense of any outfield they join with Pache mostly playing center and Waters finding spots in either corners. (Their plus to plus-plus speed plays at any level as well). But they're also plenty capable with the bat. Pache has caught fire of late, hitting .365/.400/.596 with nine extra-base hits in his last 14 games to end the regular season, and the switch-hitting Waters has handled the IL at just 20 years old with a .271 average and .710 OPS through 26 games. All of this experience is about laying the groundwork for a Triple-A return in 2020, but don't be surprised if one or both future Braves stars puts their stamp on the Governors' Cup playoffs, starting with their series against Columbus.

Pacific Coast League: Jesus Luzardo, LHP, Las Vegas -- Luzardo made four starts in the PCL in 2018 and first pitched for Las Vegas on June 22 this season, so calling him a "ringer" might feel like a stretch. But there's no doubt that when the Aviators got a healthy Luzardo back on Aug. 15 that the top A's prospect brought a boost to their Pacific Southern Division-winning charge. After missing time with shoulder and lat issues, Luzardo finished strong with Las Vegas, posting a 1.17 ERA with 19 strikeouts over 15 1/3 innings across his final three starts. (Ten of those K's came in his final six-inning outing last Friday.) The 21-year-old southpaw could still be an option for the Wild Card-chasing A's down the stretch -- where his two plus pitches, fastball and changeup, could truly be tested -- but first, he's scheduled to take the ball in Game 3 against Sacramento on Friday.

Eastern League: Clarke Schmidt, RHP, Trenton -- There was hope that the 2017 first-rounder would reach Trenton before Aug. 15, but two separate injury-list stints (one for an undisclosed illness) kept him with Class A Advanced Tampa for much of the 2019 season. After an initial hiccup, the Yankees' No. 5 prospect was lights-out in his final two Thunder outings, fanning 14 while giving up five hits without a walk over 13 2/3 innings. Fully healthy, Schmidt has three above-average pitches to play with in his fastball, curve and change, and it's that type of arsenal that plays even after a jump to Double-A. He will get things going for Trenton as the Game 1 starter at Reading on Wednesday.

Southern League: Mario Feliciano, C, Biloxi -- The Brewers are lacking in top-notch prospects since Keston Hiura graduated this summer, but don't discount the gains Feliciano made in his third full season. The 2016 75th overall pick started tapping into his power this year at Class A Advanced, where he hit a Carolina League-best 19 homers in 116 games. His previous career high was just four, hit over 104 games with Class A Wisconsin in 2017. Feliciano's .801 OPS ranked third in the Class A Advanced circuit, leading to his selection as the Carolina League MVP. With the Mudcats out of contention, the Brewers bumped their No. 9 prospect to Biloxi last week, and he'll get a chance to see how his newfound power plays at Double-A. A strong postseason would only add to his 2019 rise.

Texas League: Jarred Kelenic, OF, Arkansas -- The Mariners have had no issue pushing Kelenic since acquiring him from the Mets last offseason, and the 20-year-old has had no issue responding. After a relatively brief stay at Class A West Virginia, he moved to Class A Advanced Modesto on May 29, and less than three months later, he was on the move again to Double-A. The left-handed slugger found his power stroke this past week, ending his regular season with three homers in his last two games with the Travelers. Overall, Kelenic, who is also scheduled to head to the Arizona Fall League, didn't stumble toward the end of his first full season, finishing with 23 homers, 20 steals and a .904 OPS across three levels, and it'll be fun to see how far he can carry that into the Texas League postseason.

California League: Alek Thomas, OF, Visalia -- Like some others above, Thomas moved up his second level of 2019 in early August (Aug. 3 to be precise), so he just fits the cutoff here. After getting taken in the second round last year, the 19-year-old has already become the D-backs' top prospect after showing plus skills when it comes to his hit, run and defensive tools -- the last of which has been used exclusively in center field with the Rawhide. Thomas' glove and speed can impact any game, even as his bat catches up to the Class A Advanced level. That's been the case so far with the left-handed slugger hitting just .255 with two homers and a .667 OPS in 23 games since jumping to the Cal League. But even if it's in areas outside of the batter's box right now, MLB.com's No. 59 overall prospect can provide a boost to a side looking to give Visalia its first title since 1978.

Carolina League: Triston Casas, 1B, Salem -- Casas opened his first full season at Class A Greenville with questions about his future positon and overall potential. Now he's ranked as MLB.com's No. 86 overall prospect and clearly showing enough bat to produce at either corner infield spot in the Red Sox system. Casas hit .254/.349/.472 with 19 homers in 118 games during his time in the South Atlantic League and was promoted to Salem on Sept. 1, just in time for the Mills Cup playoffs. It hasn't taken him long to bring his big bat to the Class A Advanced lineup -- he went 3-for-7 with a homer and a double in his first two games with Salem. Even if he can strike out a bit too often with his long swing, Casas has the potential to provide a lot of thunder to the middle of any batting order, including the one he just joined.

Midwest League: George Valera, OF, Lake County -- Valera only turned 18 last November, making him the same age as many prep players taken in the 2019 Draft, but he hasn't much looked it this summer. The center fielder showed off decent pop by hitting eight homers in 46 games with Class A Short Season Mahoning Valley, placing him seventh in the New York-Penn League. He also stood out for his plate discipline with a .356 OBP and 15.4 percent walk rate. Neither skill has shown up quite yet since his move to Lake County on Aug. 26 as he finished the season 2-for-23 (.087) with no homers and two walks over six games, but that's not enough of a sample to be worried just yet. The Indians' No. 6 prospect has bounced back nicely after missing all but six games in 2018 due to a broken hamate bone, and after a week-plus of settling in, he's capable of being a force in the Midwest League postseason and adding more icing to the cake that is his 2019 campaign.

South Atlantic League: Adley Rutschman, C, Delmarva -- The Shorebirds got the transaction all Minor League clubs would die for on Aug. 21, getting this year's top overall pick. What Rutschman can do on a baseball field is already legendary as far as prospects go. The switch-hitting backstop has the chance to be plus with both his hit and power tools and is considered especially gifted behind the plate. He's already shown he can handle the running game by throwing out seven of 11 attempted basestealers across three Minor League levels in 2019, and though he's been a slow starter in the Sally League, his offensive record at Oregon State would indicate his bat is capable of doing tremendous damage at any time. If the overall skill set isn't enough, Rutschman has a penchant for coming through in big moments, whether it be helping the Beavers win a national title in 2018 (when he went 3-for-4 and framed the final called strike three in the clincher) or kicking an Oregon state record 63-yard field goal in a high school playoff game. Rutschman's ability to affect outcomes in all facets of the game (outside baserunning) should be a boon for an already productive Delmarva side.

New York-Penn League: Brett Baty, 3B, Brooklyn -- The Mets grabbed Baty with the No. 12 overall pick out of a Texas high school in June, and after their Gulf Coast and Appalachian League affiliates saw their seasons come to an end, they decided they still wanted to see more of their new No. 2 prospect and sent him nearby to Brooklyn. Despite playing 51 games in the pros on top of his prep spring, Baty has already shown that his above-average power and good eye can carry high up the chain with the Cyclones. Baty went 2-for-10 (.200) in his four regular-season games with Brooklyn after joining last Thursday, but one of those hits was a double and he also walked six times. Baty has gone deep seven times in total across his three affiliates so far as a Minor Leaguer. In reaching the postseason for the first time since 2012, the Cyclones hope they can see a few more homers from the lefty slugger before his first pro season officially comes to a close.

Northwest League: Corbin Carroll, OF, Hillsboro -- Salem-Keizer, Hillsboro's semifinal opponent, should already have a good idea of what Carroll is capable of since the 2019 15th overall pick went 4-for-10 with a triple, three walks and five runs scored against the Volcanoes in his first three Northwest League games from Aug. 8-10. But for everyone else, know that the 19-year-old center fielder has plus-plus speed, which resulted in seven triples and 18 steals in 42 games across two levels during the regular season, and a potentially plus hit tool from the left side. Carroll didn't meet much of an offensive challenge in his first taste of the pros, finishing with a .299/.409/.487 line overall, and he should be heading into the Northwest League postseason confident he can be more than just a talented fresh face. It might also help that the Washington native is playing for a chance to return to his home state with both Spokane and Tri-City sitting on the other side of the bracket. How's that for motivation?