Toolshed: Prospects with much to prove 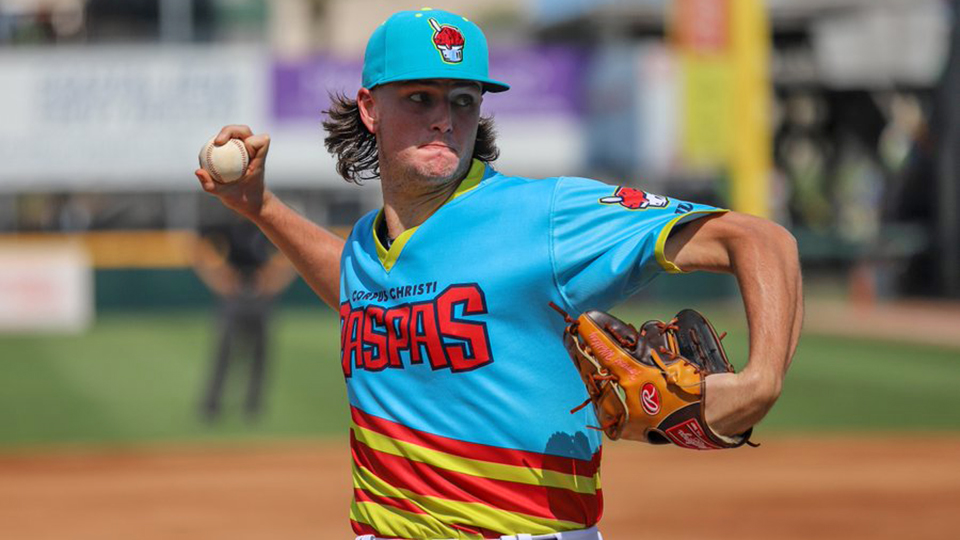 Forrest Whitley will try to change the story of his 2019 campaign in the season's closing weeks. (Corpus Christi Hooks)

As of Monday, there were only four weeks remaining in the Minor League regular season.

Most clubs will see their campaigns come to an end on Labor Day, Sept. 2, so there is a limited amount of time for the game's top prospects to leave their marks on 2019. That means different things for different players. Some will try to continue their stellar seasons, giving their organizations and prospect prognosticators plenty to think about over the winter. Some will try to turn around their fortunes after rough summers. Others still may be pushing for Major League spots for when rosters expand in September. (Of note: this will be the last season in which Major League rosters can include any and all members of the 40-man roster in September. In 2020, September rosters will be limited to 28 players.)

There is a lot on the line in these four weeks, and this Wednesday's Toolshed addresses which among MLB.com's Top 100 Prospects have the most to prove in the final days of the 2019 season. (All stats are through Monday's games.)

Angels OF Jo Adell, Triple-A Salt Lake: Adell's 2019 got off to an unfortunate start when he suffered ankle and hamstring injuries during a Spring Training game in March, forcing him out of action until late May. He proved to be every bit the five-tool outfielder upon his return, hitting .308/.390/.553 with eight homers and six steals in 43 games at Double-A Mobile, and received his first promotion to Triple-A Salt Lake last Thursday. So what does the 20-year-old outfielder have to prove? Well, it's well known that Los Angeles plans on featuring Adell in the Angels outfield alongside Mike Trout at some point, and a healthy and productive August from the 2017 first-rounder could push up that timeline, perhaps to as early as September. It may be difficult, but any numbers Adell puts up with the Bees should be taken with a grain of salt, considering the way offensive production is taking off in the Pacific Coast League in 2019. But producing better-than-league-average numbers would go a long way toward confirming that Adell is worthy of a Major League look right now.

Twins OF Alex Kirilloff, Double-A Pensacola: It's been an inconsistent summer for the Twins' No. 2 prospect, who led the Minors in extra-base hits in 2018 but is slugging just .399 in his first trip to Double-A. To his credit, Kirilloff did miss the first month of the season with a wrist injury, then was out an additional 17 days in June after getting a cortisone shot for the same issue. Plus, he'll still only be 21 years old until Nov. 9, making him almost three years younger than the average Southern Leaguer. But a strong August would make Kirilloff's second full season in the Minors look better and would send him into the offseason with a better outlook toward making a Major League debut in 2020. The good news is, there are signs of his bat being on the upswing; the left-handed slugger has already gone deep twice in August, tied for the most homers he's hit in a month this year.

Astros RHP Forrest Whitley, Double-A Corpus Christi: Whitley's 2019 foibles have been well documented. The 21-year-old right-hander opened the season as arguably the game's top pitching prospect only to give up 33 earned runs over 24 1/3 innings for a 12.21 ERA over eight appearances at Triple-A Round Rock. He was put on the injured list with shoulder fatigue in late May and has been slowly building his way up through the Astros system with innings-limited appearances in the Gulf Coast League and with Class A Advanced Fayetteville and Corpus Christi. He has especially looked himself of late, hitting the mid-90s on Sunday in his latest Double-A appearance while fanning five and allowing one earned run on two hits in four innings. A trip back to Round Rock would seem to be in the cards at some point in the coming weeks, and how Whitley handles his return to the PCL will determine much about how his 2019 is cast.

Athletics LHP Jesus Luzardo, Class A Advanced Stockton: Luzardo's season already almost qualifies as a lost one -- "almost" being the operative word. The A's top prospect was considered for a Major League rotation spot in the spring, but a shoulder strain put that to rest. He finally made his season debut on July 11 and made five appearances between Stockton and Triple-A Las Vegas before a lat strain put him back on the IL. He pitched two innings in the Arizona League on Monday and is scheduled to throw three more for Stockton on Saturday. The A's know what they have in Luzardo, and that's a left-hander with three above-average to plus pitches and impressive control, when everything is clicking. In theory, he could be of service for the big club in September, albeit in a limited capacity, as Oakland tries to track down Cleveland and Tampa Bay in the American League Wild Card race. He would just have to get through the month healthy and with his stuff intact. Easier said than done for a southpaw who hasn't made more than three appearances for a single club this season.

Video: Stockton's Luzardo strikes out the side

Nationals SS Carter Kieboom, Triple-A Fresno: The Nats had hopes Kieboom could hit his way onto the Major League roster for good back in April, when they promoted their top prospect to Washington only to see him go 5-for-39 (.128) with 16 strikeouts and four errors over 11 games. Kieboom hasn't been back up since. A healthy Trea Turner has something to do with that. But Kieboom hasn't quite knocked down the door in the same way he did in the spring. Since his return to Fresno on May 9, the 21-year-old infielder is hitting .295/.389/.489 with 11 homers over 70 games. That looks good on paper, but it's only slightly above-average at a 114 wRC+. No one is doubting the No. 25 overall prospect's long-term offensive promise. But if he's going to carve out a bigger role for himself in the nation's capital for the stretch run, Kieboom, who has also played some second and third base in 2019, could use a hot August.

Cubs SS/2B Nico Hoerner, Double-A Tennessee: There was so much promise for last year's 24th overall pick coming into his first full season. The Stanford product was coming off a standout Arizona Fall League campaign and was pushed straight to Double-A to open 2019 on the belief that his plus bat would translate quickly. It did, for the most part, with Hoerner hitting .300/.391/.500 through his first 18 games with the Smokies. Then, he suffered a hairline fracture in his left wrist after getting hit by a pitch on April 23 and hasn't quite been the same since. The right-handed-hitting middle infielder is batting .241/.299/.362 with two homers in 30 games since returning to the Tennessee lineup on July 4. The good news is, he's making tons of contact; Hoerner has struck out in only 11.8 percent of his plate appearances in that span. Still, he could use a few more hits falling in during the final weeks to maintain the optimism on his overall hit tool.

Yankees RHP Deivi Garcia, Triple-A Scranton/Wilkes-Barre: Don't get things mixed up. Garcia is still very much a hyped-up prospect. He has jumped into MLB.com's Top 100 for the first time, all the way up to No. 66, because of his incredible ability to use a plus fastball, plus-plus curve and average change to get strikeouts -- 138 over 90 1/3 innings across three levels, in fact. But after breezing through Class A Advanced and Double-A, the 20-year-old right-hander -- like so many pitchers before him in 2019 -- has hit a bit of a rough patch at Triple-A, allowing 14 earned runs over 19 innings (6.63 ERA) in his first four starts. He even struggled with control at times, walking four over three frames in his International League debut. The Triple-A strikeout rate is still solid at 20.7 percent, but it's far drop-off from his 39.0 percent at the other levels. Yankees general manager Brian Cashman has already said publicly that New York is considering Garcia for a bullpen role (but not a starting one right now), so the big club doesn't seem overly concerned with the results so far. It'd still behoove Garcia to prove he can really succeed with the Triple-A/Major League ball with a few quality outings in August.

Indians LHP Logan Allen, Triple-A Columbus: The 22-year-old left-hander knows his way around a trade. Five months after he was taken in the eighth round of the 2015 Draft, Allen was moved from the Red Sox to the Padres in the Craig Kimbrel deal. The process he's going through with his latest swap -- from San Diego to Cleveland in a three-team blockbuster last week -- is nothing new. What is new is the high-stakes opportunity that's in front of MLB.com's No. 98 overall prospect. Allen made eight appearances (four starts) for the Padres and couldn't quite stick, with a 6.75 ERA, 14 strikeouts and 13 walks over 25 1/3 innings. However, he was given plenty of rope because of San Diego's decision to play the kids. He won't have the same benefit with the Indians, who are trying to both chase down the Twins in the AL Central and hold off the Rays and A's in the Wild Card. Allen's appearances for Columbus this month will be de facto auditions for a possible bullpen role in September. He has the four-pitch mix, highlighted by a plus changeup, to make it work, and the Tribe definitely liked enough of what they saw in him to seek him out in the Trevor Bauer trade. Now, it's on Allen to put it on display for the third organization of his young career.