No. 89 prospect showing stuff, control one year after record deal 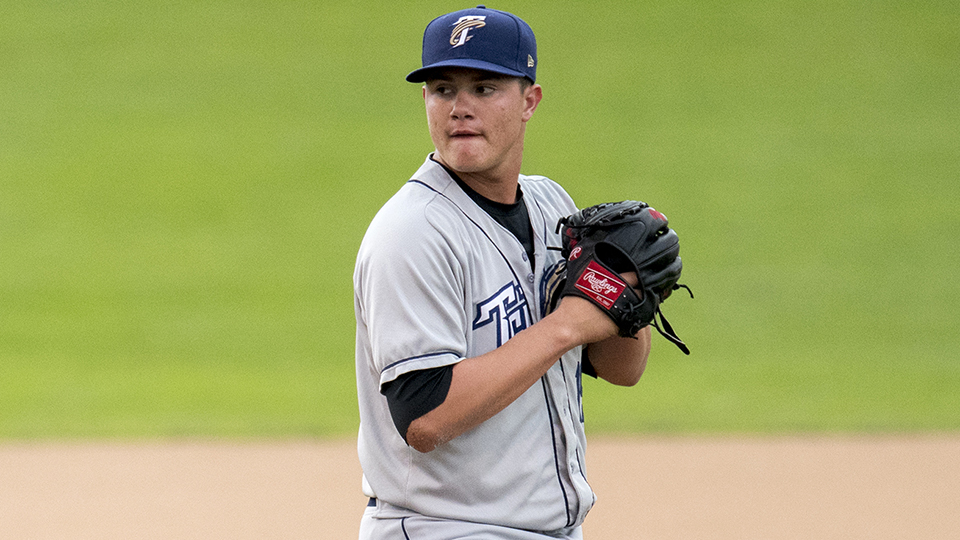 Adrian Morejon has struck out 17 and walked only one through 19 innings with Class A Short Season Tri-City. (Jared Ravich/MiLB.com)

Sam Geaney first saw Adrian Morejon when most of the world did, at the 2014 15U Baseball World Cup. Acting as the Oakland A's coordinator of international scouting, Geaney was dispatched to keep up with players from places like Japan, Venezuela, Panama and host Mexico. But it didn't take long to notice that the Cuban left-hander was going to stick out.

Facing a USA team that included Royce Lewis and Hunter Greene -- the top two picks of this year's Draft -- in the competition's final, Morejon tossed a 124-pitch complete game, striking out 12 and allowing three runs on seven hits and a walk in a 6-3 win. Geaney took plenty of notes based on what he observed -- and they weren't all about the tournament MVP's impressive stuff.

"I think the competition level in this guy still jumps out," said Geaney, now the Padres' director of player development. "And that hasn't really changed. Pitching well, getting the win, there's nothing more important to him than that. It's basically central to who he is."

The 15U World Cup came to an end in August 2014, and two months later, Geaney moved to his position with the Padres. Two years later, Morejon's name appeared on Geaney's notes again -- this time as a potential July 2 signing.

Indeed, Friday marks the one-year anniversary of the Padres officially signed Morejon -- who left Cuba in October 2015 -- to an $11 million signing bonus, an investment that doubled to $22 million since San Diego had already breached its spending pool for the 2016-17 international signing period. Not only was that $11 million bonus an organizational record, it's a record that is unlikely to fall. International amateur spending changes in the latest collective bargaining agreement have established a hard cap of $5.75 million for all players an organization is able to ink in a single singing period.

One year later, Morejon, who is ranked as MLB.com's No. 89 overall prospect, looks like he might be worth every penny.

The Padres had the 18-year-old begin his professional career with Class A Short Season Tri-City for the beginning of the Northwest League season last month, and in four starts, he's posted a 3.79 ERA and 1.21 WHIP with 17 strikeouts and one walk in 19 innings.

"He's been very impressive for a multitude of reasons," Geaney said. "This being his first year in the U.S., there is a lot of new stuff to him, but he's handling it well. ... I was able to see one of his handful of starts, and he was featuring quality stuff across the board, all over the plate. He's mostly throwing in the low-90s, but he'll pop 96 or 97 in there. The curve and the change have their times when they look above-average. Really across the board, we're very pleased."

If there's one thing that stands out so far, it's Morejon's control. He didn't allow a walk in his first three starts and ran that stretch to 17 innings before the first free pass came in the fifth frame Tuesday.

"He has a really good delivery that helps with that control," said Geaney. "He's big. He's strong. It's a cliche, but he's a good athlete for a pitcher. Fields his position well. All that translates to command and control. But I just don't think he likes to walk guys. Like I said before, he's just such a competitor that I think he can dig deep and throw strikes when he needs to. The command will continue to refine as he goes up the chain, but this has been impressive to see."

Because of the advanced nature of Morejon's stuff and control, the Padres have been able to get a little aggressive with the Cuba native, skipping him over the complex circuits in the Dominican and Arizona. There were reports this spring that he was a candidate to begin the season with Class A Fort Wayne, but that a shoulder injury held him back. Geaney refuted that, saying the shoulder issue only kept Morejon from throwing for 7-10 days and that they weren't planning to send him to an affiliate until late May or June. With short-season ball starting in mid-June, Tri-City lined up well.

It should be noted that the Padres haven't taken this tact with every player they signed during the 2016-17 international period, however. As part of its rebuild, San Diego was one of the most aggressive teams on the international market, signing seven of MLB.com's top 30 international prospects in that window. Of those seven, only shortstop Luis Almanzar is with Morejon on the Dust Devils roster. Shortstop Gabriel Arias, outfielder Jeisson Rosario and shortstop Jordy Barley are each in the Arizona League, while outfielder Jorge Ona and right-hander Ronald Bolanos -- fellow Cubans who are both two years older than Morejon -- are with Fort Wayne.

For now, the Northwest League is a good middle ground for a player who already had some professional experience -- Morejon made six appearances in the Cuban National Series as 15-year-old in the 2014-15 season -- but only just made the full-time move to the U.S. last November.

"From a talent standpoint, we wanted him pitching in the States because he thrives off the challenge," Geaney said. "But [with Tri-City], he's facing more advanced hitters, where mistakes will be hit more than they would be in extended spring training or if he was still on the complex. Even though he's still only 18, he's well on his way to developing a good routine on his own, whether it's in the weight room or making good nutrition choices. These things exist everywhere, but outside the complex, he has more freedom, and that means more responsibility. On the field. he's still trending in the right direction. Off the field, we wanted to give him that push."

That said, the Padres reserve the right to propel Morejon again as the season progresses. They've already upped his workload to the point where he threw six innings and 91 pitches last time out, and Geaney has said they'll treat him like a pitcher coming out of high school. He pointed to 2015 third-rounder Jacob Nix as an example. Nix threw 105 1/3 innings from April to September with Fort Wayne but didn't go deeper than six frames in any of those outings. Morejon might not hit that innings total with the Dust Devils, but that wouldn't count his innings from extended spring training, which don't show up on a player page but still count the same when it comes to work on the arm.

San Diego wants Morejon to continue to show his three above-average offerings and plus control all the way to September and possibly beyond, should a lower-level affiliate make its playoffs. Tri-City has a chance to be that club with a 13-9 record in the early going, but Geaney didn't rule out a move to Fort Wayne, which is 9-6 in the second half after a miserable first half (26-44) -- should the TinCaps be playing meaningful games down the stretch.

At the very least, no matter where Morejon's playing, that team will know they have a pitcher who already has a championship pedigree and proven himself on some big stages.

"You scout a lot of players when you're at those international tournaments, but I remember thinking it wouldn't shock me if he ended up being one of the top 16-year-olds on the market if and when he got out [of Cuba]," Geaney said. "When we signed him, I had a new job and obviously didn't know what had happened in between. But he's here now, and we're all excited for the growth he has shown and continues to show with us."