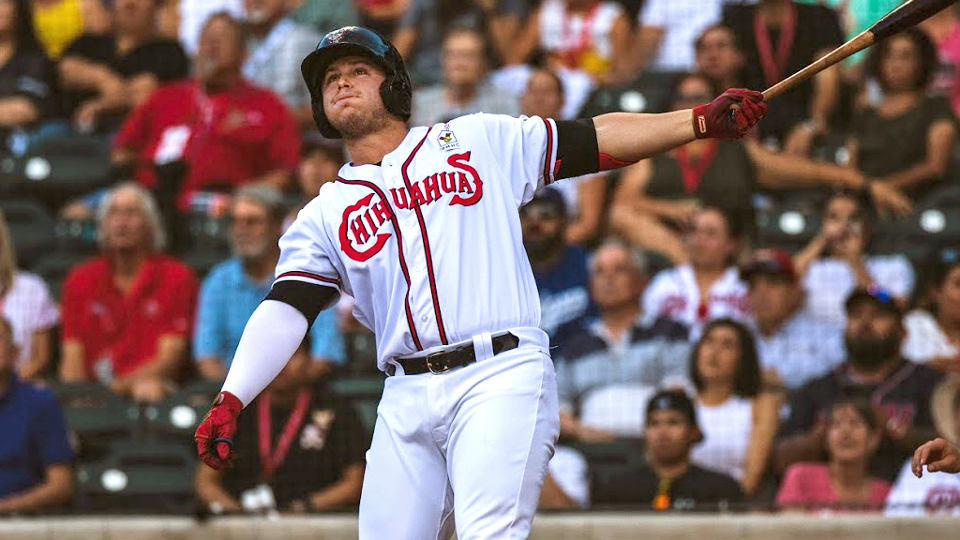 How will we remember the 2019 season?

A lot of that will be determined by the final numbers. For all the ebbs and flows of the regular season, the numbers aren't set in stone until the final pitch of the campaign. That's right around the corner, with most Minor League circuits coming to an end on Labor Day, Sept. 2. These are some of the statistical races to follow over the next two weeks before the book closes on the regular season. (Note: All stats are current through last night's games.

.399 batting average, Ty France, Triple-A El Paso: Last year, the entire Minor League community was checking in on Vladimir Guerrero Jr.'s progress as he attempted to become the first full-season Minor Leaguer since Erubiel Durazo (.404) in 1998 to hit above .400. The then-No. 1 overall prospect ended up with a .381 average. This year, we've got another challenger to that title, albeit a somewhat quieter one. With so much of the focus in Triple-A going toward the home run jump -- more on that later -- France is bordering on a historic season of another sort. The Padres' No. 23 prospect has owned a season average of .400 or above in 25 of his 76 games with the Chihuahuas. He had that up to .406 as recently as last Saturday. Now, the 25-year-old infielder is back below the double-Mendoza line, and while it's tough to predict that anyone will average two hits for every five at-bats the rest of the way, he's as good a bet as anyone going. Entering Friday, El Paso had 18 games remaining on the calendar, and France's plate appearances in every one of them should be must-follow. (Update: France was called up to the Padres on Friday, hindering his chances to break the .400 mark in the Minors. There is still a chance he heads back to El Paso at some point, but that might be unlikely given the holes in the San Diego infield without Fernando Tatis Jr. and Ian Kinsler.)

1.59 ERA, Daniel McGrath, Double-A Portland: The Red Sox left-hander and Australia native hasn't given up more than an earned run in an outing since June 16 in his lone appearance with Triple-A Pawtucket. Since he returned to the Sea Dogs, he has given up a total of two earned runs over 57 2/3 innings for an ERA of 0.31. (He has fanned 62 and held opposing batters to a .138 average over that same span.) Because of that run, McGrath, who has a 1.35 mark with Portland alone, has a chance to set the lowest ERA for a player with more than 90 innings pitched for a single full-season team since Mark Cohoon's 1.30 for Savannah in 2010. While he's going for that, he still has to hold off ninth-ranked Giants prospect Seth Corry (1.64) for the Minor League full-season ERA lead. The margin there is so small that if McGrath were even to give up two earned runs over six innings in his next outing, his ERA would "jump" to 1.67, putting him behind Corry. McGrath's next scheduled start is Saturday.

2.8 percent strikeout rate, Nick Madrigal, Triple-A Charlotte: No one makes as much contact as the No. 5 White Sox prospect. Madrigal has been punched out a mere 13 times in 458 plate appearances across three levels this season, resulting in the aforementioned low, low rate. In fact, that's lowest among Minor League qualifiers, and it's not even close; Rangers infielder Michael Chirinos is second with a 5.1 percent rate over 217 plate appearances. That's almost double the percentage of strikeouts in more than half the plate appearances. You'd have to take the minimum number of Minor League PAs all the way down to 40 before someone sneaks in under Madrigal in this category. That individual: of course, it's contact king Willians Astudillo at 2.3 percent (one K in 43 PA). At the Minors' top level, tougher arms could challenge Madrigal to put the ball into play this consistently. One more thing, though: Madrigal is also tops with just a 2.1 percent swing-and-miss rate. Even when he's facing Triple-A pitchers, don't bet against Madrigal making tons of contact.

36.7 percent strikeout rate, Joe Ryan, Double-A Montgomery: Like Madrigal, Ryan doesn't just lead full-season qualifiers in this rate stat; he leads all qualifiers, including those in short-season leagues. The 2018 seventh-rounder has popped up big time in his first full campaign, jumping to the No. 16 spot in a crowded Rays farm system primarily on his ability to get whiffs. His low-90s fastball, which is often difficult for hitters to pick up because of Ryan's deceptive delivery, is largely to thank for that. In terms of raw numbers, Ryan is behind only Royals hurler Kris Bubic for the Minor League lead with 163 total K's but has a clear lead in K rate ahead of Cristian Javier (36.4) and Tarik Skubal (36.0). Where Ryan's lead gets tricky is that he just moved up to Double-A, and the hitters there may be better at jumping on his heater than those at Class A and Class A Advanced. (Case in point: he struck out four and gave up three earned runs in four innings in his Montgomery debut Wednesday.) He'll have to adjust and continue to develop his curveball, slider and changeup to keep the top spot.

37 home runs, Kevin Cron, Triple-A Reno: The Joe Bauman Home Run Award race is always a fun one in the closing weeks. Last year's came down to Pete Alonso's final swing of the season, when his walk-off shot for Las Vegas gave him the 2018 title. This year's is feeling like more of a runaway. And that's insane, because Cron doesn't even have enough plate appearances to qualify for the Pacific Coast League batting title. After going deep three times Tuesday, the D-backs' No. 26 prospect has 37 on the season (36 with Reno, one in the AZL), giving home three more than his closest competitor in Seth Brown (34) with Las Vegas. It shouldn't be a surprise that most of Cron's other competition comes from the Pacific Coast League in Kyle Tucker (32), Sam Hilliard (30) and Jared Walsh (30). But a quick shoutout to Pirates prospect Mason Martin, who has 32 homers split between Class A Greensboro and Class A Advanced Bradenton. The 20-year-old slugger will try to keep up with his competitors while calling the pitcher-friendly Florida State League home the rest of the way. Best of luck to him on that venture.

149 hits, Matt Hearn, Class A Advanced Lancaster/Xavier Edwards, Class A Advanced Lake Elsinoe: Hit totals aren't generally something the baseball populace gets excited about unless the number 3,000 is attached, but the race to be the 2019 Minor League hit leader has some serious intrigue. Hearn was a 24th-round pick by the Braves out of a California junior college in 2016, was released in 2017 and then signed with the Rockies. Now, he's proving to be the prototypical leadoff hitter for Lancaster, batting .307/.373/.381 with 41 stolen bases in 115 games. (This isn't a Lancaster split issue either; Hearn is hitting .314 at The Hangar and .300 on the road.) Beyond his interesting story, it's also fascinating to see who's around him. Edwards has a similar hitting profile in 2019 (little power, slap hitter, impressive baserunning) but possesses a higher ceiling as the No. 77 overall prospect and 38th overall pick from the 2018 Draft. Fellow Top-100 prospects Gavin Lux (148) and Luis Robert (148) are right behind that pair in a tie for third, and those two are closer to stereotypical sluggers than Hearn and Edwards. Robert and Lux might get somewhat of an advantage playing at Triple-A, but doubting a pair of hitters in the Cal League would be a fool's errand. This should be a fun and diverse race down the stretch.

181 wRC+, Luis Robert, Triple-A Charlotte: No, Robert doesn't lead full-season Minor Leaguers in this category. That distinction belongs to France (194). However, Robert is second, and it's important to point that out in a year in which Triple-A sluggers are dominating so many of the other major offensive categories. At least wRC+ controls for the league environment, allowing Robert to get major credit for the way he dominated at Class A Advanced Winston-Salem and Double-A Birmingham to begin the season. Now playing with the Triple-A ball, the top White Sox prospect's slugging numbers are up -- he has one more homer (nine) for Charlotte than he did for Birmingham in 96 fewer plate appearances -- but it'll be interesting to see just how much he'll have to crush to keep his status at No. 2 here. Even with a .323/.378/.647 line for the Knights, his wRC+ has dropped from 193 to 181 since his Triple-A debut on July 11.

240 home runs, Triple-A El Paso: Yes, that's a record. Technically. The previous Pacific Coast League "record" for home runs by a single team was 231, set by Omaha in 1999. The Chihuahuas passed that last Friday. We put record in quotation marks because the 1974 Sacramento Solons hit 305 homers, but that was with a non-regulation left-field fence that, for part of the season, measured only 232 feet away from home. Will 2019 results similarly be given an asterisk because of the change in the Triple-A ball? Time will tell, but for now, enjoy watching just how far the El Paso slugging squad can take the new PCL record. As of Wednesday, eight different Chihuahuas -- Michael Gettys, France, Esteban Quiroz, Luis Urias, Jose Pirela, Jason Vosler, Austin Allen, Jacob Scavuzzo -- had hit 15 or more home runs this season. Those eight have combined to hit 162 dingers in total; that's more than the entire PCL rosters for Iowa (159), Memphis (158), Nashville (154), Tacoma (143) and Omaha (139).