Toolshed: Lowe heating up with Biscuits

Rays' No. 12 prospect tapping into five-tool potential at Double-A 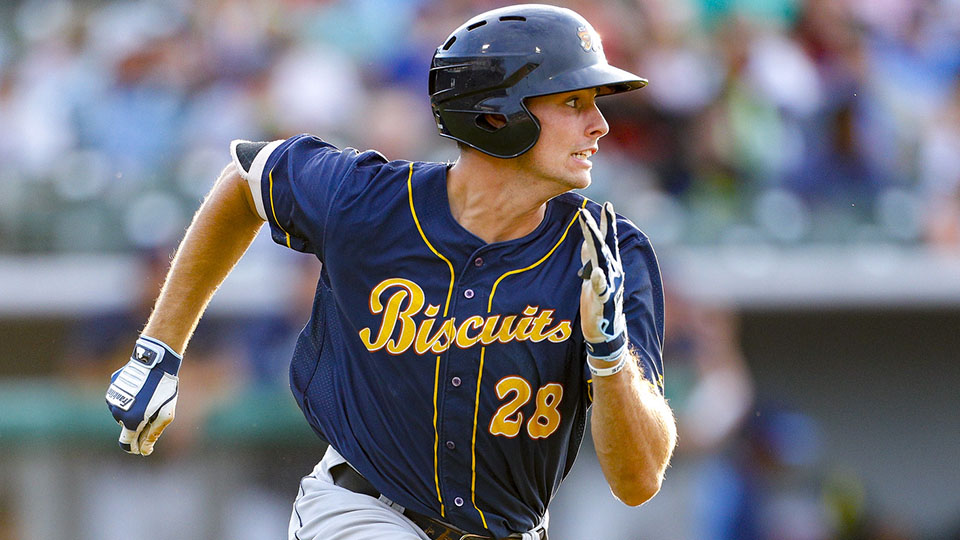 In backyards and ball fields across their Georgia neighborhood, brothers Josh and Nate Lowe threw around the Wiffle ball and swung the bright yellow bat, dreaming of a time when they could each bear their last name on the backs of the same Major League jersey. The aspirations were the same; their styles of play have always been a little different.

"He's always been the bigger one," Josh said with a bit of a laugh before getting serious. "But I've always been faster."

Three years older, Nate Lowe has already achieved his part of the dream, making the Majors for the first time with the Rays back in April. And with the way Josh -- Tampa Bay's No. 12 prospect -- has been improving of late, it might not be long before their childhood fantasy is complete.

That would be a positive development for any player, but especially for Lowe. The Rays drafted him out of Pope High School in Marietta, Georgia with their first-round pick (13th overall) in 2016 when it was believed he could have made it either as a pitcher throwing in the low-to-mid-90s or as a multi-tooled position player. Tampa Bay saw the most promise in the latter and signed Lowe with a $2.6 million bonus. That potential has taken some time to shine through, however. Lowe was an average hitter for Class A Bowling Green in 2017 and dipped a bit below that for Class A Advanced Charlotte last season, hitting .238/.322/.361 with six homers in 105 games. Even by Florida State League standards, that resulted in a 98 wRC+ (below the 100 average on that scale).

Tampa Bay still trusted that the outfielder could handle a jump to the Minors' second level, making him the fifth-youngest player on a Southern League Opening Day roster this season behind Top-100 prospects Drew Waters, Cristian Pache, Brusdar Graterol and Ian Anderson. But if Lowe was going to handle that jump, he knew he couldn't carry his previous habits with him to Double-A. Over the summer, he's worked consisently with Montgomery hitting coach Jamie Nelson on developing the mental approach needed to take off. It's been a months-long process, but one that's started to bare fruit.

"I'm trying to be more focused on what I want to accomplish when I get in the box," he said. "Hitting is tough. No matter where you go, hitting is tough. Simplifying the hitting aspect as best you can is the biggest thing I can do this season. For me, that means seeing certain areas and zones and focusing in on those. It's easier to cover that than the whole plate. You can't cover everything out there, so looking into your area is one of the biggest keys to making good contact. ... Once it's there, take an easy swing and let the ball do the rest."

With that change in focus, Lowe isn't quite making more contact necessarily. His K rate is actually slightly up from 25.7 percent in 2018 to 26.2 in 2019. But he is taking more walks -- his 11.2 percent walk rate is a career high -- and when he is making contact, it's much louder. Nearly half (16 of 35) of his career home runs have come this season alone, and his .430 slugging percentage would represent a career high if the season ended today. Part of the power jump is getting out of the pitcher-friendly FSL, but it also involves a full maturation process for the slugger. Lowe, who measures in at 6-foot-4, 205 pounds, has shown plus raw power dating back to his prep days but hasn't been able to get that to translate into his pro game until 2019. That was never a concern for him, though.

"It's been a matter of learning myself," he said, "learning what I can and can't do. There are a lot of things I've had to work on in pro ball, but I was never worried about power because they say that always comes later. It's not something that bothered me ever, and I think what's happening now is that, with some of these adjustments I've made to my approach, that's finally coming to fruition."

Another possible explanation is that Lowe isn't quite going the other way as much. In 2018, he hit balls to the opposite field 36.5 percent of the time, only to see that drop to 30 percent this season with Montgomery. Most of those balls are now going to center, where his distribution percentage has jumped from 23.6 to 31.1, while his pull rate has stayed steady at 38.9 percent. That's partly by design.

"It's kinda interesting to hear that because for me, I'm looking for a pitch middle-away," he said. "I feel like I'm hitting my best when I'm looking to drive something to left-center. If I focus on that, I don't care what comes next. If it's a hit, it's a hit. If someone catches it, I'm not going to complain. Once the ball hits the bat, there's nothing I can do. But at least this way, it keeps me tighter to the ball and more inside of it, so I give myself something to drive."

Even before the offensive improvements, Lowe had other tools that give him at least a shot at a Major League job some day. His speed has always received plus grades, and he's put it to good use with a career-best 29 stolen bases this season, third-most in the Southern League. The Rays also have tried to utilize that speed on the defensive end. Lowe was drafted as a third baseman but struggled in his first pro taste at the hot corner, making 18 errors in 45 games between the Gulf Coast and Appalachian Leagues in his Draft year. Tampa Bay approached Lowe at the instructs that followed and told him they wanted to see him in center field, hoping to make the most of his speed and arm combo out there. Within weeks, he felt comfortable at the position, and he's become one of the best defensive outfielders in the system in the three years since. This season alone, Lowe has nine outfield assists: seven from center and two from right.

"This is what felt like home to me," Lowe said of center field. "It gives me a chance to roam among the grass, and it didn't take long at all to feel comfortable. I think defense is always going to give me some level of comfort. If I go through a cold stretch, I can always go back to my defense and know I'll have an impact out there. It's something I can rely on, and I hope everyone can see that."

Whether it's with the glove or his newly hot bat, Lowe figures to be a key figure in Montgomery's upcoming postseason run. The Biscuits already clinched a playoff spot with a North Division first-half title and are going for the sweep with a five-game lead over Jackson for the second-half crown as well. That club success is a direct result of the depth of the loaded Tampa Bay system, one that boasts not one but two impressive Lowes.

"It's not hard for us to really be on the same page and talk back and forth being in the same system," Josh said. "It's a pretty special honor that we're in the same organization, especially one with a farm system like this, and we're always talking about how we hope to continue to bring championships to the organization, and that's at every level, including here."