Toolshed: The origins of Orioles' Rutschman 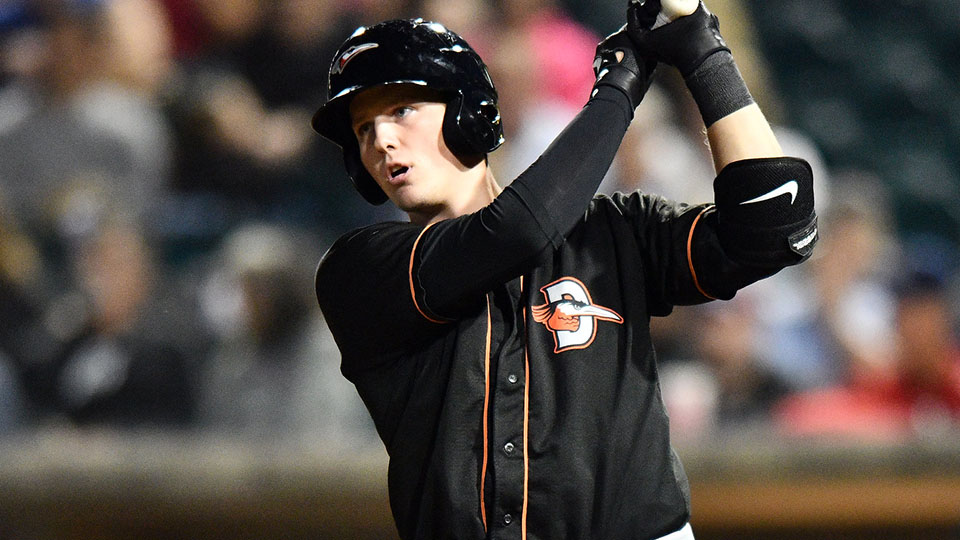 Adley Rutschman has played 32 games across three levels in his first professional season with the Orioles. (Ken Inness/MiLB.com)

LAKEWOOD, New Jersey -- The scouting report on Adley Rutschman is already the stuff of legends: a switch-hitting catcher with a good hit tool, impressive power, solid glove and plus arm.

The bonus was legendary: Rutschman signed for $8.1 million after going first overall to the Orioles out of Oregon State in June, the highest figure ever given to a Draft pick.

The outlook has the potential to be legendary: Rutschman is oft-compared (fairly or not) to Giants backstop Buster Posey -- a six-time All-Star, National League Rookie of the Year, NL MVP, Gold Glover, batting champion and three-time World Series champion.

But legends are built, not born. So how did we get to this point? As MLB.com's No. 6 overall prospect closes out his first season of professional baseball with Class A Delmarva in the South Atlantic League, Toolshed revisits three memorable moments that have helped put Rutschman on the path to superstardom.

This reporter barely had to finish the number before Rutschman's eyes widened. It'd been a while since he'd been asked about it in an interview. So much of the focus has been on baseball. This question was about his football prowess -- more specifically, his Oregon high-school record 63-yard field goal in 2015.

"That's a vivid, vivid memory for me," Rutschman said from the visiting locker room at Class A Lakewood's FirstEnergy Park on Tuesday.

In his senior year at Sherwood High School, Rutschman's football team had reached the second round of the playoffs. The future Oriole had been a running back and linebacker during the regular season but was prevented from playing either position in this postseason contest due to a sore neck. That left him with one job. Rutschman was his team's kicker, and he was still a dangerous weapon.

"Before the game, I did a couple field goals to get warm," Rutschman said. "I was able to stretch it out to 65 before the game. So we all looked at each other and said, 'Alright, we're good from 65 today.'"

It would've been one thing to show off only during pre-game, but this was more than a one-off. Rutschman had successfully attempted a field goal from 49 yards in a game earlier in the fall, and head coach Greg Lawrence thought the future baseball star had more in him on the gridiron.

"Our coach for the entire year was saying we would try a long one that year. We would go for the record," Rutschman said. "But we didn't have any other opportunities like that one."

"That one" came with 2.9 seconds left in the first half with Sherwood leading comfortably, 35-7. The hosts had reached as far as their opponents' 45-yard line, but most on the Sherwood side were comfortable heading back to the locker room up four touchdowns. Not Lawrence, who immediately called a timeout. And that's when Rutschman knew.

"Everybody was wondering why he called a timeout," Rutschman said. "Let's just let the time run out. He's like, 'Let's kick a field goal.' So they called on me and the rest of the field goal squad out there and tried one from 63 to end the half. Obviously I made it, so we got to celebrate on the field a little bit because it was halftime."

There are many reasons why Rutschman -- whose grandfather Ad Rutschman was a legendary football coach in his home state -- isn't currently working out in NFL preseason, instead of working his way up the Orioles chain. For one, at the time of The Kick, he had already agreed to go to Oregon State on a baseball scholarship, and while he did play football for the Beavers in the fall of 2016 exclusively as a kickoff specialist (making 20 touchbacks on 53 kickoffs), he stuck only to baseball starting the following year.

Still, Rutschman does credit the 63-yarder with helping to get the ball rolling on some of the accolades that have followed since.

"It was definitely a confidence booster for me, going forward," he said. "It was the first kind of those big moments. After that, it was baseball season, couple different awards like Gatorade Player of the Year, my freshman fall where I kicked for the football team and then right onto Omaha."

The Beavers made the NCAA tournament in each of Rutschman's three years on campus, reaching the College World Series in 2017 and 2018. That first trip saw Oregon State drop out in the semifinals to perennial powerhouse LSU. Buoyed by a roster that returned Rutschman, Nick Madrigal and Trevor Larnach among seven players that would be taken in the top five rounds of the '18 and '19 Drafts, the Beavers fought their way back to TD Ameritrade Park.

In fact, Rutschman and his teammates put Oregon State on the precipice of the program's first national title since the Beavers went back to back in 2006 and 2007. Having split the first two games of the Finals, they faced a must-win against Arkansas to determine the NCAA champion. Batting cleanup behind Madrigal, future organizationmate Cadyn Grenier and Larnach, Rutschman did his job, driving home his team's first and third runs with singles in his first and second at-bats. He finished 3-for-4, the most hits of any player in the clincher.

But his most important work may have come behind the plate.

Freshman right-hander Kevin Abel was having no trouble handling the Razorbacks and took the ball again in the ninth, working on a 5-0 shutout in arguably the game of his life.

But it was the final out when Rutschman put his elite framing skills on full, national-broadcast display. Arkansas cleanup hitter Luke Bonfield worked the count full against Abel, who had retired 20 straight Razorbacks at that point, and with the trophy on the line, the Oregon State coaching staff wasn't going to get cute.

"I remember we called a fastball, and I thought I was going to frame anything that's close," Rutschman said. "I wasn't expecting a fastball in the dirt, so I knew I was going to get under anything. He threw it low and away, and all I could think was, 'I'm going to stick this.'"

Sure enough, Abel spotted a 92 mph heater low and away from the right-handed hitting Bonfield. Rutschman snapped the ball in place. Bonfield began to throw his bat aside in anticipation of a potential rally-building walk. Rutschman still didn't move. Strike three, called the home-plate umpire. Strike call secured. Championship secured.

"The coaches at Oregon State did a great job of helping me out the second I got on campus," Rutschman said of his framing skills. "They got on me about catching the ball where it's pitched and really sticking it and being relaxed at the same time. You hear people talk about soft hands behind the plate, and it was really about teaching me that first before manipulating the pitch that's out of the zone. Make sure you're keeping strikes as strikes, instead of letting your glove creep out of the zone."

It was all over but the celebrating, and Rutschman quickly got to that, shedding the tools of ignorance on the way to the dog pile forming around Abel on the mound. In the process, he also discarded the game-winning ball -- to the chagrin but mostly laughs from the Oregon State coaching staff.

"They said if I was a vet, I probably wouldn't have done that," Rutschman said. "I probably should've pocketed it before I got in the dog pile."

Delmarva, where Rutschman was promoted to last week, has already clinched its spot in the South Atlantic League playoffs, giving the gifted backstop yet another chance to win a title in orange and black. He'll probably hold onto the ball this time.

But what of Rutschman's offensive potential? He was a .352/.473/.559 hitter over his three seasons on campus and was at his best this spring when he produced a .411/.575/.751 line, 17 homers, 76 walks and only 38 strikeouts over 57 games as a junior. Pitchers repeatedly tried to work around Rutschman, and when they couldn't do that, he made them pay. MLB.com's scouting report entering the Draft noted 60 grades for both his hit and power tools. Only Cal slugger (and eventual White Sox pick) Andrew Vaughn could say the same among ranked 2019 selections.

Fast forward to Rutschman's pro debut, which was delayed until July 20. The Orioles announced his signing on June 25 as general manager Mike Elias told reporters that the organization planned to send its new top prospect to the Gulf Coast League for a brief stint before moving him up to Class A Short Season Aberdeen. That plan was pushed back when Rutschman had a bout of mononucleosis.

"I was down in the GCL for a couple weeks before I even got to play, working on the tee, trying to hit," he said. "Finally got to step in a game. Being able to play after a month and a half of not playing, you get those butterflies again."

It didn't take long for the slugger to show to himself and the world that his timing was back. Batting fifth and playing DH, Rutschman made solid contact in his first two at-bats against the GCL Pirates, bouncing out sharply to shortstop in the second inning and flying out to right field in the fourth. Facing right-handed reliever Lizardy Dicent to lead off the sixth, Rutschman connected on the first pitch he saw, lifting his first professional home run to right field in just his third professional at-bat.

"Seeing live pitching for the first time, I was just trying to see pitches," he said. "I was really working on stuff then. Just getting accustomed to timing. I was able to square up the first two balls and put them in play. So I was feeling pretty good. He threw me a 0-0 fastball in the zone. I was on time and able to get it."

These are just three brief chapters of the legend Rutschman has already built in his attempt to become an American sports star. But here's the other thing about legends. Once they're built, people expect them to repeat.

Rutschman was drafted first overall with the Orioles planning to make him the future face of the franchise for which he'll catch top prospect Grayson Rodriguez and lead a lineup that also boasts boppers like Ryan Mountcastle for years to come. And who knows, maybe he'll even freeze the final out of the World Series and bring Baltimore its first championship since 1983.

But that's getting ahead of things. The legend of Rutschman is only getting started.

"It's always fun to relive memories and think about your mind-set at that time in those particular moments," he said. "It brings a lot of perspective to the moment you're currently at. It always makes you relax a little bit more and reminds me that I've done stuff like this in the past. I shouldn't treat it any differently now."