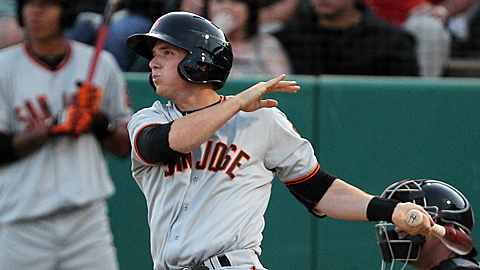 ST. PETERSBURG, Fla. -- Rymer Liriano and Gary Brown, who were chosen as their respective leagues' Topps Player of the Year in the annual George M. Trautman Awards earlier this month, are among the 10 players chosen for the Topps Class A All-Star Team. The best performances in all Minor League Baseball classifications are again being honored by the Topps Company of New York, N.Y., in conjunction with Minor League Baseball.

Josh Whitaker (22), of Grovetown, Ga., finished second in the Midwest League with a .326 batting average and a .556 slugging percentage. The Burlington Bees first baseman was also among the top five in the league in on-base percentage (.402) and extra-base hits (54). The Oakland Athletics selected Whitaker in the 25th round in 2010 out of Kennesaw State (Ga.) University.

Tyler Bortnick (24), of Myrtle Beach, S.C., paced the Florida State League with 43 stolen bases and a .428 on-base percentage. The Charlotte Stone Crabs second baseman also finished in the top 10 in Class A in runs (96) and walks (79). The Tampa Bay Rays drafted Bortnick in the 16th round in 2009 out of Coastal Carolina (S.C.) University.

Jedd Gyorko (23), of Morgantown, W.V., led Class A with a .365 batting average and a 1.068 OPS. The Lake Elsinore Storm third baseman was second in the classification in on-base percentage (.429) and slugging (.638). The San Diego Padres, who took Gyorko in the second round in 2010 out of West Virginia University, promoted him to Double-A™ on July 4.

Andrelton Simmons (22), of Mundo-Novo, Curacao, led Carolina League hitters with a .311 batting average and 161 hits. The Lynchburg Hillcats shortstop finished second in the league with 35 doubles and was also the toughest batter to strike out, fanning only once every 13.26 plate appearances. The Atlanta Braves selected Simmons in the second round in 2010 out of Western Oklahoma State Junior College.

Gary Brown (23), of Walnut, Calif., led Class A with 188 hits and tied for the classification lead with 13 triples. The San Jose Giants outfielder was among the best in Class A in batting average (.336), stolen bases (53), runs (115), extra-base hits (61) and OPS (.925). Brown also paced California League outfielders with a .989 fielding percentage. The San Francisco Giants took Brown in the first round in 2010 out of Cal State Fullerton.

Michael Choice (22), of Arlington, Texas, hit 30 home runs to lead the California League. The Stockton Ports outfielder hit .285 with 82 RBIs and ranked ninth in slugging percentage (.542) in Class A. The Oakland Athletics drafted Choice in the first round in 2010 out of the University of Texas-Arlington.

Rymer Liriano (20), of Santo Domingo, D.R., played in 15 games for the Lake Elsinore Storm before the San Diego Padres sent him to the Fort Wayne Wizards in the Midwest League. Liriano was named the Midwest League's Most Valuable Player and Prospect of the Year for hitting .319 with 12 homers and 62 RBIs. He finished second in Class A with 66 stolen bases. The Padres signed him as a non-drafted free agent in July 2007.

Ramon Cabrera (22), of El Tigre, Venezuela, led the Florida State League with a .343 batting average. The Bradenton Marauders catcher was also among the league leaders in on-base percentage (.410), OPS (.881) and slugging percentage (.471). The Pittsburgh Pirates signed Cabrera as a non-drafted free agent in April 2008.

Darin Gorski (24), of Mount Joy, Pa., claimed Florida State League Pitcher of the Year honors for going 11-3 with a circuit-best 2.08 ERA for the St. Lucie Mets. The left-hander's ERA was second-best in the classification and his WHIP of 1.00 ranked third in Class A. In 138 2/3 innings Gorski struck out 140 and walked only 29. The New York Mets drafted him in the seventh round in 2009 out of Kutztown (Pa.) University.

Heath Hembree (22), of Cowpens, S.C., led the California League with 21 saves, despite being in the league for only half the season. In 26 appearances, the San Jose Giants right-hander went 0-0 with a 0.73 ERA. He fanned 44 and walked 12. The San Francisco Giants, who selected Hembree in the fifth round in 2010 out of the College of Charleston (S.C.), promoted him to Double-A on June 16.

(Statistics do not reflect players' performances in other classifications.)