Bichette breaks out power for Bisons 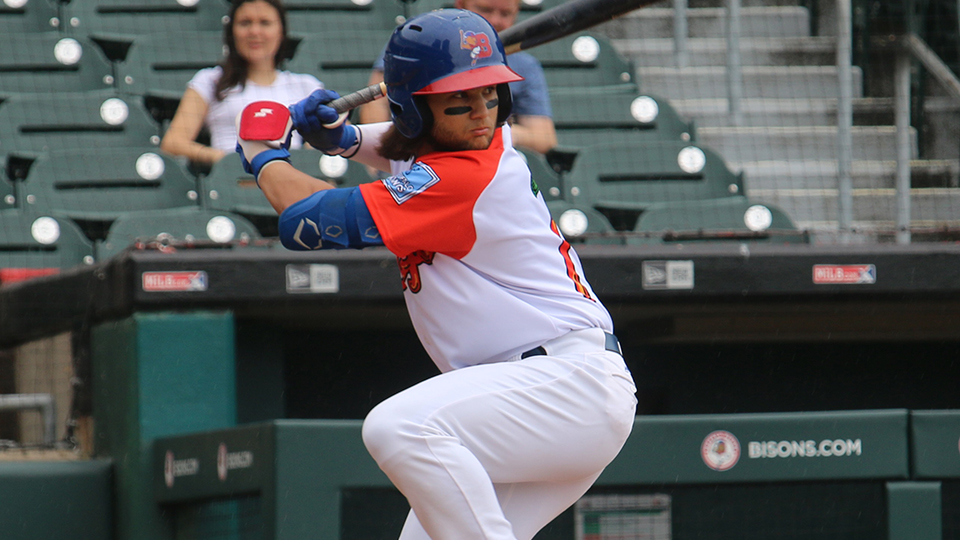 Bo Bichette is 8-for-22 with two homers, five RBIs and three runs scored during a five-game hitting streak. (Buffalo Bisons)

Since coming back from the injured list at the end of June, Bo Bichette has done plenty of damage at the plate in the International League. It was more of the same from the top Blue Jays prospect on Wednesday.

MLB.com's No. 8 overall prospect came into the day riding a four-game hitting streak that included four knocks over his previous two contests. In the first two innings of Wednesday's matinee, he popped to first and lined hard to center field. Although he didn't have anything to show for thoses first two trips to the plate, the 21-year-old said he was "seeing the ball good."

Bisons manager Bobbby Meacham has seen a noticeable uptick in Bichette's performance over the last handful of games.

"He's been playing well. I think he stumbled a little bit out of the gate, coming back from the All-Star break, but his last couple games he's swung the bat much better, not trying to do too much," Meacham said. "You can see him staying with his approach, going the other way. It paid off [Wednesday]. For a while, he was chasing hits, I thought. It looked like [Wednesday] he settled down his approach a little bit, stayed up the middle and it paid off."

Having that good eye helped Bichette in the fifth when he fell into an 0-2 hole against Knights starter Justin Nicolino. He sent the fourth pitch over the fence in right.

Roemon Fields led off the seventh with a double to left, setting the stage for the 2016 second-round pick. Bichette ambushed the first offering from lefty Colton Turner and deposited it over the right-center field wall for his seventh homer of the season. Although injury has limited him to 46 games, the Florida native is four homers off the pace from last season with Double-A New Hampshire.

Bichette wasn't just doing it with the bat against the Knights. He also made his presence known at shortstop. In the sixth, Alcides Escobar ripped a pitch up the middle that caromed off righty Corey Copping. Bichette charged in and to his left, picking up the ball on a bounce before firing to first in time to nab Escobar.

The son of former Major Leaguer Dante Bichette has a .948 fielding percentage with Buffalo this season and said he's been pleased with the way he's continued to improve defensively.

"I expect to go out and do well every day," the shortstop said. "I've been really excited with how I've been playing defense. I've been making some really good plays lately, and obviously one today. So it feels really good to be out there and playing well."

With his strong play lately, Bichette told Sportsnet on Tuesday that he feels ready to take the next step to the big leagues. After the matinee, he said he wasn't trying to stir anything up with his comments but believes in his on-field strengths.

"I definitely wasn't trying to create any controversy, I was just asked a question and I was being honest with how I feel," he said. "Yeah, I'm definitely really confident in my ability and the fact that I can go up and help right now. So that was really just trying to get my point across."