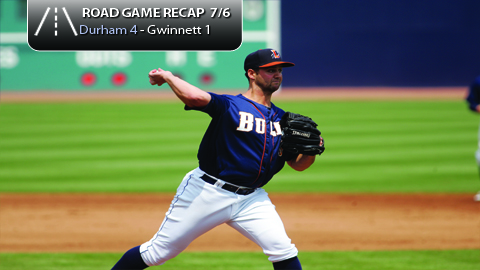 Lawrenceville, GA --- Matt Torra sliced through the Gwinnett offense using just 75 pitches over seven innings to lead the Durham Bulls past the Braves 4-1 at Coolray Field on Friday night.

Torra (W, 8-6), who won for the sixth time in his last seven decisions, only permitted a solo homer in the second inning over his start, and three times completed an inning using single-digit pitches.

The Bulls (43-47) remained in sole possession of third place with the victory, and moved to within six of South Division-leading Charlotte, which was blanked by Norfolk on Friday night.

Durham struck first against Todd Redmond (L, 6-6), scoring three times to open the game. Rich Thompson doubled on the game's third pitch, then scored on a single to center by Jesus Feliciano. Three batters later, Leslie Anderson drilled his team-leading ninth homer to straightaway center to give Torra a 3-0 edge.

After a Ruben Gotay homer trimmed the Bulls' lead to 3-1, Durham reclaimed a three-run lead in the fifth on consecutive doubles by Feliciano and Henry Wrigley to go ahead 4-1.

Torra was lifted to start the eighth to allow Brandon Gomez into the game, who pitched around two hits in the eighth. Dane DeLaRosa notched his 10th save in 11 tries by working a perfect ninth inning. Torra was in line for perhaps his eighth career complete game. In 2009, Torra pitched a nine-inning, 85-pitch complete game against the Chattanooga Lookouts, his finest start of his career.

The game saw four brilliant defensive plays by the Bulls, including leaping catches by Cole Figueroa and Matt Mangini, an all-out sprinting catch by centerfielder Rich Thompson, who caught a drive in straight-out left field, and a tricky throw by right fielder Feliciano to nab Felix Pie rounding first base in the fourth inning.

Wrigley led the nine-hit attack with his fifth three-hit game in his last eight starts, lifting his average to .333.