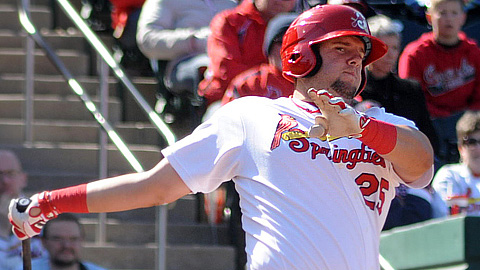 Matt Adams was certainly far from the biggest name in the Texas League this season, but on Friday, he was recognized as the best around.

For Adams, the Cardinals' 23rd-round pick in 2009 out of a Division II school, the recognition is well-earned. The 22-year-old is hitting .312, ranks second in the league with 30 homers and leads the circuit with 94 RBIs. His .586 slugging percentage ranks second.

"I use a gap-to-gap approach that allows me to keep on the ball even when the pitchers throw off-speed pitches," Adams said earlier in the week. "I also have a quiet swing with not a lot of movement to it that helps eliminate holes in my swing."

"It was definitely a special moment for me because I had my dad in the stands," Adams said. "To hit that ball and cross the plate and look up to him in the stands and see him smiling and cheering is something that I'll never forget."

Shoemaker was another easy pick -- the Arkansas hurler leads the league with 12 wins, a 2.21 ERA, a 1.03 WHIP and trails only Springfield's Michael Blazek with 125 strikeouts. He's managed five complete games, including two shutouts and has earned Pitcher of the Week honors three times this season.

The rest of the roster is stocked with former first-round picks -- Midland's Grant Green was voted in at the utility spot and outfielder Mike Trout, who was promoted straight to the Majors, was selected as one of four outfielders.

The team was selected by managers, radio play-by-play announcers and beat writers for the clubs. The full roster is below: