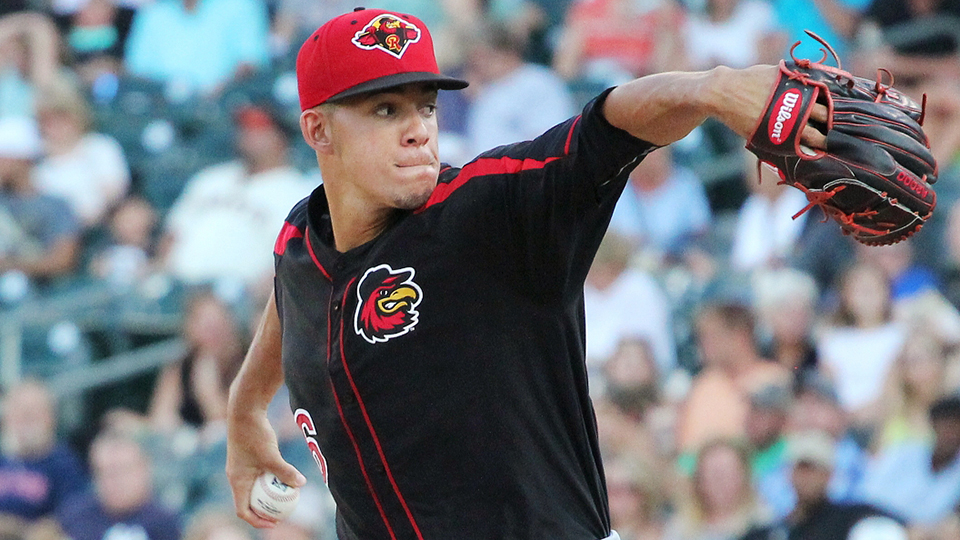 In an organization full of young talent, Berrios stands out as the prospect closest to making an impact for the big club. He made a smooth transition from Double-A to Triple-A last year, thanks to a repertoire that is as diverse as it is nasty. The Puerto Rico native posted a 2.62 ERA in 12 International League starts and averaged better than a strikeout per inning over 75 2/3 frames.

The soon-to-be 22-year-old boasts an impressive arsenal of plus pitches that is headlined by a low- to mid-90s fastball and supported by an above-average changeup. His breaking ball ranks third, but that isn't much of a knock considering how impressive his other two offerings are. Berrios' ability to mix those pitches has allowed him to turn lineups over without running into problems, something many young pitchers have trouble doing.

Aside from his three strikeout-inducing pitches, Berrios has the type of makeup and eagerness to learn that impresses his coaches. "If I have a chance to learn, I learn. I try to learn something new every day, for baseball or for life," he said in an MiLB.com Q&A last year. "I learn something every day from somebody. I always learn more about how to play the game or how to help my teammates improve. Baseball is a game that you play as a team. You need to know how to play as a team."

Twins director of Minor League operations Brad Steil said that the intangibles Berrios brings to the table have played an integral role in his quick ascent.

"His makeup has certainly contributed to his success," Steil said. "He's a confident kid, he works extremely hard and he is very coachable."

Berrios won't start the season in Minnesota, but it would be surprising if he doesn't make his big league debut before the All-Star break.

It's becoming an offseason tradition to see Buxton's name atop prospect rankings. The 2012 second overall pick headlined MLB.com's Top 100 Prospect List from 2013-15 and ranks second in this year's edition. Even though it's never a bad thing to be listed as a consensus top 10 prospect, Buxton and the Twins hope this is his prospect list swan song.

Buxton's seat might be the hottest of any prospect in the sport and a slow start could test the mettle of the Twins' front office. But Steil said patience is key in handling Minnesota's star prospect.

"He's shown an ability to adapt to new levels and new leagues very quickly," Steil added. "But the Major Leagues is the biggest, most difficult step of them all, so with him it is going to be about patience."

The Twins had every intention of anointing the 22-year-old their Opening Day center fielder and can only hope that Buxton shows no ill effects after missing considerable time over the past two seasons.

At the crossroads: Alex Meyer, RHP

Not so long ago, Meyer was the prized pitching prospect the Nationals sent to the Twins in exchange for Denard Span. At the time of the trade, the 6-foot-9 right-hander was projected as a top-of-the-rotation starter with staff-headlining stuff, but he's become one of baseball's most perplexing prospects.

Last season, the Twins thought the answer would be found in the bullpen and began preparing Meyer for his new role. In 30 relief appearances for Rochester, he averaged better than a strikeout per inning, but he posted a 1.41 WHIP and posted a 16.88 ERA in two big league outings.

According to Steil, Meyer came into Spring Training competing for a spot in the Twins' bullpen, but the club decided to send him back to Rochester with the intention of stretching him out as a starter.

"Alex had a very good year in 2014 as a starter in Rochester, so we haven't given up on that," Steil said. "Also, starting will give him more opportunity to work on his pitches and delivery. He can always slide back to the bullpen if that's where he fits in Minnesota."

"We want him to work on his pitches and that's tough to do in the 'pen," Twins general manager Terry Ryan told The Pioneer Press. "I'm not saying that's going to be for the life of his career or even the life of the 2016 season, but that's the way we're going to start. We'll gauge it as we go."

Jay was so dominant as a reliever at the University of Illinois that Minnesota selected him sixth overall in last year's Draft.

The left-hander built on his successful college career with an impressive, albeit brief, late-summer stint with Class A Advanced Fort Myers. He made 19 appearances for the Miracle and recorded 22 strikeouts over 18 1/3 innings. The 6-foot-1 southpaw showed enough polish that the Twins plan on converting him to a starter this season.

"[Turning him into a starter] was our original plan," Steil said. "It goes back to what our scouts saw at the Draft, He has the four-pitch-mix and overall athleticism to be a successful starting pitcher."

If Jay shows he can handle being stretched out, it would not be surprising to see MLB.com's No. 60 overall prospect climb through the Minors at a rate similar to Berrios'.

In an organization that boasts two pitchers (Meyer and Jay) known for superlative heaters, one would be hard-pressed to pick another fastball for this category. But when a pitcher can consistently hit triple digits on the radar gun, as Chargois can, it turns heads.

The Rice University product also has an impressive slider that tickles the upper-80s and a changeup that can become a plus pitch as he continues his development.

"He has three very good pitches and his stuff is about where it was before the Tommy John [surgery]," Steil said. "But his command probably isn't all the way back yet."

Like that of many young power arms, Chargois' fate will come down to his ability to throw strikes and manage different game situations. The 25-year-old converted all 11 of his save opportunities for Double-A Chattanooga last year while posting a 2.73 ERA. If he builds on that success, he could be the heir apparent to Twins closer Glen Perkins.

More to keep an eye on: Like Chargois, Nick Burdi's fastball makes him an intriguing relief prospect but, and stop us if you've heard this before, his success will be determined by whether or not he can consistently find the strike zone. ... It isn't every day that a German-born player ranks high on prospect lists, but that's where you find Max Kepler. Kepler, whose parents are professional ballet dancers, boasted a .322/.416/.531 slash line last year at Chattanooga and earned a late-season promotion to Minnesota. ... Jorge Polanco is the type of multi-faceted player that coaches dream about. He can hit for a high average and is athletic enough to hold down a few different positions. Should he develop his plate discipline, he could become a super utility player for the Twins. ... Nick Gordon, the kid brother of the Marlins' Dee Gordon, already looks like he could play shortstop at the big league level. Gordon hit .277 at Class A Cedar Rapids in 2015 in his first full Minor League season.