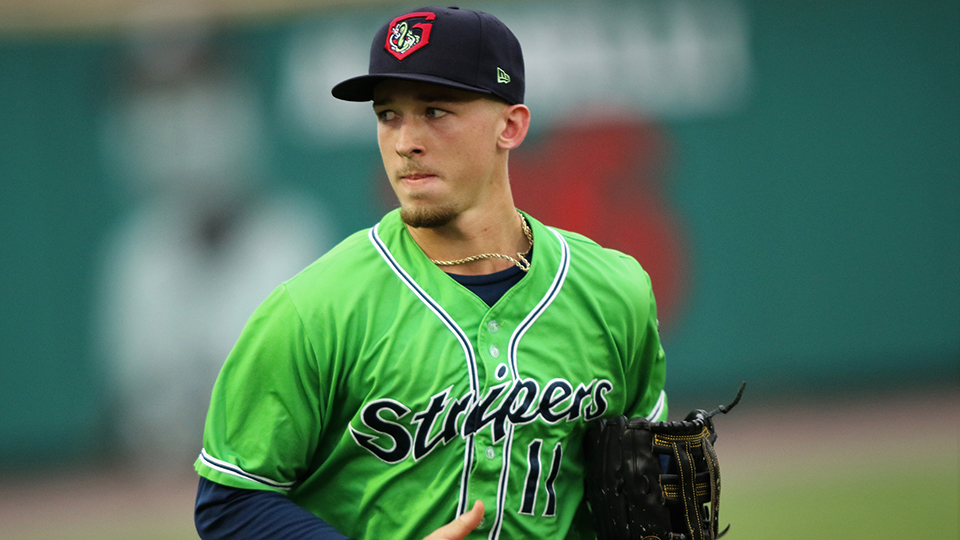 Drew Waters proved himself more than capable of succeeding against Double-A competition. His Triple-A debut Tuesday offered a similar impression.

Atlanta's second-ranked prospect singled three times, drove in a run and scored once in his first game for Triple-A Gwinnett, which fell to Rochester, 8-3, at Frontier Field.

Waters was playing for the first time since Saturday, when he went hitless in three at-bats in his final game with Double-A Mississippi. He was promoted on Monday with third-ranked Ian Anderson, one day after top-ranked Cristian Pache learned he was moving up.

All three were in the Stripers' lineup Tuesday, but Waters might have enjoyed it the most.

MLB.com's No. 27 overall prospect beat out an infield single to shortstop in the opening frame against right-hander Sean Poppen. He evened the score, 1-1, with an RBI knock to right field in the second and scored later in the inning on Andres Blanco's triple to give Gwinnett a short-lived lead. The 20-year-old grounded out in the fourth and struck out in the sixth before ending his debut with a single to left in his last at-bat.

Waters ended his time in the Southern League with his name all over the circuit's leaderboard. The Georgia native topped the league in average (.319), hits (134), doubles (35), triples (nine), extra-base hits (49) and total bases (202). Tuesday marked Waters' 40th multi-hit performance of the season and his 17th with three or more hits, including four four-hit contests.

"Last year I was a really handsy hitter, and I still am a really handsy hitter, but I really didn't have much going on with my lower half," Waters told MiLB.com after winning Southern League Player of the Week honors in June. "So now that I've put a focus on developing a strong lower half this past offseason with my swing and I've carried it over into the season. Not only am I seeing pitches better, but now I'm able to hit a slider, I'm able to hit a fastball consistently and I'm able to hit the changeup too."

Selected in the second round of the 2017 Draft out of Etowah High School in Woodstock, Georgia, the switch-hitting outfielder enjoyed a solid professional debut that summer before busting out last year. Waters compiled a slash line of .293/.343/.476 with 57 extra-base hits and 23 stolen bases between Class A Rome and Class A Advanced Florida as a 19-year-old. He carried that success into 2019 and was rewarded with a spot on the Southern League All-Star team. He entered the break batting .338 with a .916 OPS.

On the pitching side, Anderson (0-1) wasn't as fortunate. The 21-year-old right-hander was charged with five runs on six hits and four walks with five strikeouts and a wild pitch in three innings in his first Triple-A start.

Baseball's 34th-ranked prospect was leading the Southern League with 147 strikeouts and had limited opposing hitters to the second-lowest batting average (.202). Anderson didn't allow more than two runs in 16 of his 21 starts with the M-Braves and carried a 2.09 ERA in his previous 10 starts dating to June 5.

Alejandro De Aza smacked a grand slam and drove in a career-high five runs for Rochester. He also had five RBIs in the Majors with the Mets on Aug. 25, 2016. Ramon Flores homered, doubled and plated three runs.

Poppen allowed two runs on six hits and two walks with six strikeouts in 3 2/3 innings. Preston Guilmet (2-6) yielded a hit and a walk while fanning three over two frames to pick up the win for the Red Wings.