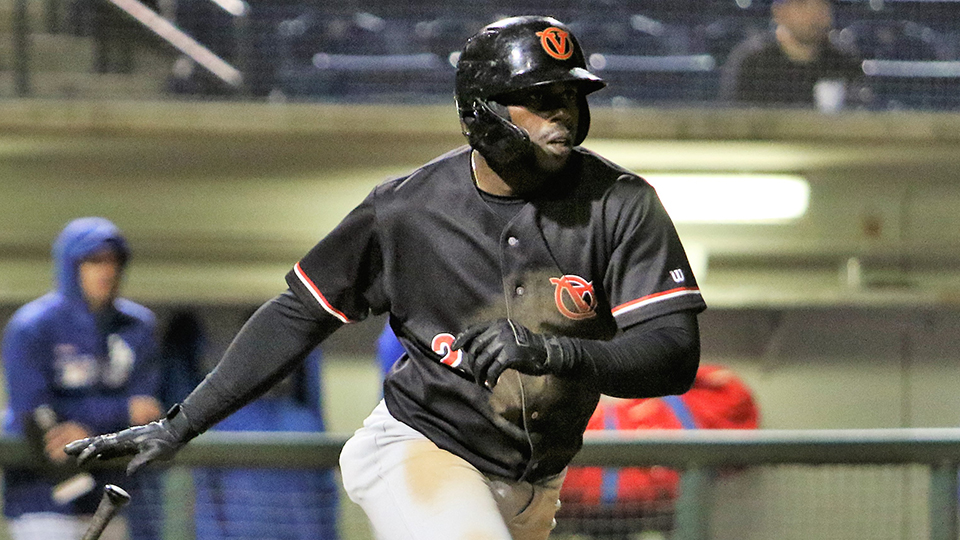 Yoel Yanqui and Cole Bartlett came up clutch as Visalia reduced the California League Championship Series to a best-of-3 affair.

Yanqui singled in the go-ahead run in the fifth and Barlett gave up two hits over three innings of scoreless relief as the Rawhide edged Lake Elsinore, 2-1, in Game 2 of the Finals on Wednesday at The Diamond.

"It was a close game, but the guys executed the way we wanted them to and the way they've been doing all year," Visalia manager Shawn Roof said. "It was fun to see them play with a lot of confidence in a game that close."

With two outs in the fifth, Eduardo Diaz tripled to right field on a 3-2 pitch from starter Reiss Knehr (0-1). Yanqui legged out a grounder to shortstop to plate the decisive run.

"That guy's a competitor," Roof said of the 23-year-old Cuban, who's hit safely in all five playoff games. "It seems whenever we need a big hit, he's always there. He's a big guy, he hustled down the line. To see him bust down the line, especially in a Championship Series, was pretty neat."

Bartlett (1-0) came on after Ryan Weiss gave up a run on five hits and two walks over three innings in his postseason debut. The right-hander escaped trouble when Padres No. 13 prospect Tucupita Marcano -- who reached on a fielder's choice -- was caught stealing third to end the fourth, then faced the minimum in the fifth and sixth.

"He kept them off-balance," Roof said of the 2017 25th-round pick. "He has a plus sinker and he just went out there and attacked. He filled up the zone and got a lot of weak contact. We had a lot of great defensive plays. He came up huge for us tonight.

"He's able to get [his sinker] on right-handers' hands and he can throw it up against lefties. He also has a plus changeup and he throws a breaking ball. When you can fill up the zone on three pitches, two of them being plus pitches, good things will happen."

Lake Elsinore nearly tied it in the eighth. Padres No. 14 prospect Gabriel Arias drew a one-out walk against right-hander Luis Castillo and 12th-ranked Tirso Ornelas ripped a double down the left field line that bounced off the fence near the bullpen. That enabled left fielder Eduardo Diaz to make a play on the ball and prevent Arias from scoring. Breckin Williams ended the threat by getting Olivier Basabe to pop out to second.

"We knew it was going to be close," Roof said. "When it's hit, you are saying, 'Don't let it go into the bullpen' because if it goes in the bullpen it could have been a triple or an inside-the-park home run. You don't want to go down on something like that. Luckily, Diaz got to that ball and Breckin Williams got a big out for us."

Williams struck out two in the ninth, working around a single by Marcano, to register his third postseason save.

Visalia grabbed a 1-0 lead in the third when Knehr issued a bases-loaded wal to Max Murphy, but the Storm tied it in the bottom of the inning as Padres No. 19 prospect Jeisson Rosario doubled home fifth-ranked Xavier Edwards.

The series shifts to Visalia for Game 3 on Friday.