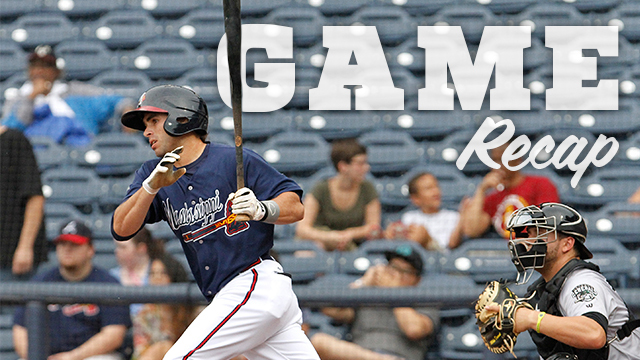 PEARL, MS -- In the inaugural meeting of two Mississippi minor league clubs in the modern era, the Biloxi Shuckers defeated the Mississippi Braves 8-7 at Trustmark Park. With Biloxi's stadium still under construction, the originally scheduled road series was moved to Pearl, May 6-10. The series continues Thursday at 7:00 PM.

Mississippi (11-13) scored seven runs on 15 hits while Biloxi (17-9) plated eight runs on 16 hits. Offensively for the M-Braves, Daniel Castro and Corban Joseph led the way with three-hit nights at the plate. Castro, Joseph and Kevin Ahrens each drove in two runs.

The M-Braves took a 2-0 lead in the top of the second. Kevin Ahrens doubled and took third on a ground out. Joseph then delivered a RBI-single to right field. Matt Lipka followed with a base hit to right field. Joseph advanced to third on the play but came around to score on an errant throw by the right fielder.

In the bottom of the frame, Tyrone Taylor reached on an error. He moved to second on a ground out and stole third on a Kyle Wren walk. Yadiel Rivera then singled to drive home Taylor and cut the Braves lead to 2-1.

Michael Reed and Nathan Orf reached on back-to-back singles with two out in the bottom of the third. Taylor then singled to right field, allowing Reed to score the tying run. Orf advanced to third and Taylor took second on an error by the right fielder. Orf later scored on an error by the shortstop, putting the Shuckers out front 3-2.

Wren singled and Rivera doubled to start the bottom of the fourth, putting runners at the corners with one out. Orlando Arcias then delivered a two-run single to right field, extending Biloxi's lead to 5-2. Nick Ramirez followed with a double to right, making it a 6-2 game.

The M-Braves got one run back in the fifth to make it 6-3. Castro and Rio Ruiz both singled. Ahrens then delivered a RBI-single to center to score Castro.

In the bottom of the fifth, Adam Weisenburger singled and moved to second on a ground out. He then came around to score on Rivera's ground-rule double down the right field line, extending the Biloxi lead to 7-3.

The Shuckers made it an 8-3 game in the sixth. Reed singled and stole second before scoring on Taylor's base hit to center.

Castro and Ruiz reached on consecutive singles again to start the Braves' seventh. Ahrens and Joseph later drove in both runners to cut the Shuckers lead to 8-5.

Emerson Landoni singled and Mallex Smith doubled to start the eighth. Castro then delivered an RBI-single to left field, driving home both runs to make it a one-run contest.

Brooks Hall (4-0) worked six innings for the Shuckers, giving up three runs and two earned runs on eight hits and two walks. He struck out five and picked up the win. Damien Magnifico (S, 2) came on to record the final four outs and notch the save.

Jason Hursh (0-2) went 3.2 frames for the M-Braves and took the loss. He gave up six runs, four earned, on 10 hits and three walks while fanning one batter.