Trio of M-Braves recognized by the league 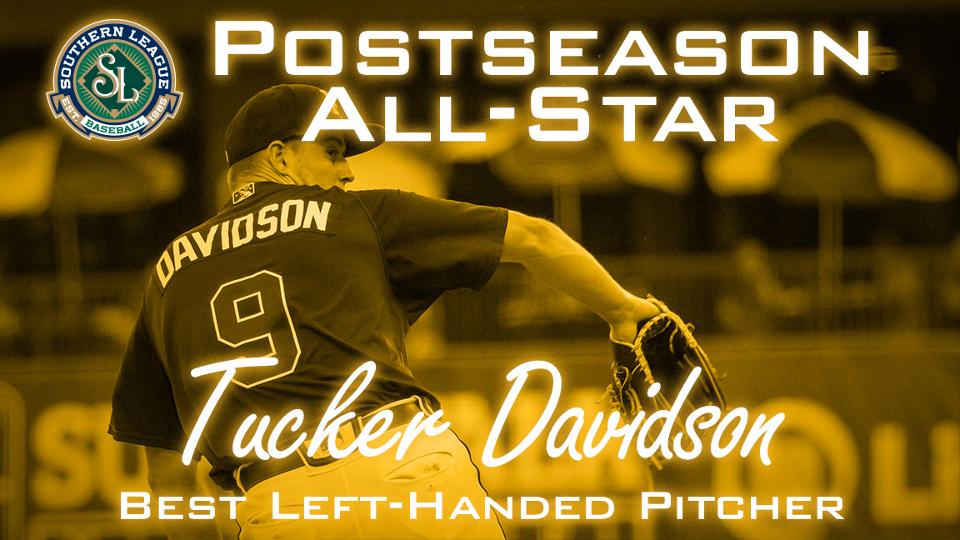 Davidson, 23, had a breakout campaign in 2019 and led the Southern League with a 2.03 ERA over 21 starts for the M-Braves before his promotion to Triple-A Gwinnett on Aug. 5. The Amarillo, Texas native ranks second in all of Double-A baseball and is fourth in Minor League Baseball, among qualified pitchers in ERA. The southpaw posted a 7-6 record with the M-Braves, striking out 122 batters compared to 45 walks in 110.2 Southern League innings.  Davidson, a midseason Southern League All-Star, won his final four M-Braves starts posting a 1.38 ERA, allowing just four runs in 26.0 innings, 27 strikeouts, six walks. The Texan didn't allow an earned run over 16.2 innings from June 13-30 and matched a career-high twice with 8.0 shutout innings on May 18 at Birmingham and again on July 18 vs. Pensacola.  Over his first three Gwinnett starts, Davidson is 1-0 with a 1.72 ERA, notching 12 strikeouts to just five walks. Davidson is the No. 13 overall prospect for the Braves and was a 19th round selection (559 overall) by the club in 2016 out of Midland (TX) Junior College.

Pache, 20, the Atlanta Braves top overall prospect hit .278 over 104 Southern League games with 28 doubles, eight triples, 11 home runs, 47 extra-base hits, 53 RBI and .815 OPS before his promotion to Triple-A Gwinnett on Aug. 5. Pache still ranks among the league's top-10 in eight different offensive categories, including 10th in batting average and second to Waters in extra-base hits.  The midseason Southern League All-Star had an 11-game hitting streak, June 8-21 and 15-game on-base streak, June 4-22. Since his promotion to Gwinnett, the Dominican Republic native is batting .250 with five doubles, one triple, and six RBI in 21 games.  Pache is ranked as the No. 11 overall prospect in baseball according to MLB Pipeline and was signed by the Atlanta Braves as a non-drafted free agent on July 4, 2015.

Waters, 20, a hitting machine atop the Mississippi Braves lineup, he took the Southern League by storm in 2019 and soared toward the top of the Atlanta Braves prospect lists. At the time of his Triple-A promotion on Aug. 5, Waters led all qualified batters in several offensive categories including batting average (.319), hits (134), extra-base hits (49), total bases (202), and OPS (.847). Entering play Wednesday evening, the All-Star outfielder ranks among the leaders across MiLB in both hits (160, 4th) and doubles (40, 2nd). He was previously named the Southern League's Player of the Week on Monday, June 17. The Atlanta Braves selected Waters in the second round of the 2017 draft out of Etowah High School in Woodstock, Georgia. He is currently listed as Atlanta's No. 2 prospect and the no. 25 overall prospect in baseball by MLB Pipeline.