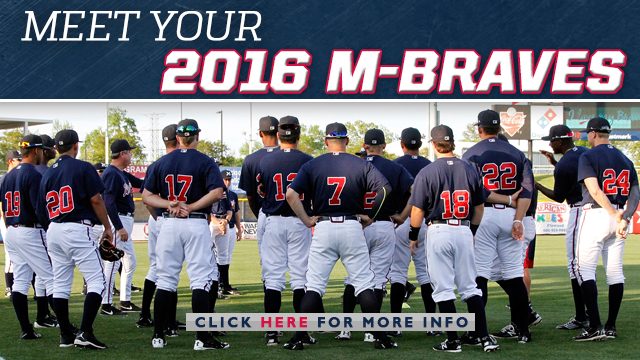 PEARL, MS-The Mississippi Braves, Double-A affiliate of the Atlanta Braves, is proud to unveil its travel roster to start the 2016 season which begins Thursday, April 7 at Trustmark Park. As ranked by Baseball America, the M-Braves club features two of the Atlanta Braves top 10 prospects including Sean Newcomb (2) and Ozzie Albies (6).

Ole Miss alumnus Chris Ellis along with Southern Miss alumnus Bradley Roney are set to begin the season with the Mississippi Braves while Brandon Barker and Connor Lien, 2016 Braves Organizational Pitcher and Player of the Year at High-A Carolina, also start the new season at Trustmark Park. Emerson Landoni and Victor Mateo, who won the same organizational awards for the M-Braves last season, are set to return to the Double-A club.

Newcomb is also ranked as the No. 24 prospect in Baseball America's 2016 Top 100 Prospects. The lefty was acquired by the Braves in the offseason via trade with the Angels in a five-player deal that sent Andrelton Simmons to Los Angeles. Newcomb split the 2015 season between three different levels, combining to post a record of 9-3 with a 2.38 ERA. He struck out 168 batters in only 136 innings of work.

Albies ranks among Baseball America's Top 100 at No. 63. The shortstop was named Low-A Rome Player of the Year by the Braves organization last season and ranked fourth in the South Atlantic League after posting a .310 batting average with 21 doubles, eight triples and 29 stolen bases for the Rome Braves. He was signed by the Braves as a non-drafted free agent out of Curacao on July 2, 2013.

In addition to Barker, Ellis, Newcomb and Roney, other newcomers on the hill at Trustmark Park include RHP Rob Whalen, LHP Matt Marksberry and LHP Steven Kent. Catchers Matt Kennelly and Steve Rodriguez return to the Double-A club while fans may welcome Willians Astudillo behind the plate to share batterymate duties.

Marksberry appeared in 31 games with Atlanta last year. Barker led all Braves farmhands in wins (12) and strikeouts (109) last season. Roney combined to strike out 70 batters in 48.1 innings of relief last season between Rome and Carolina. Astudillo claimed the Florida State League Batting Title last season and was selected as a FSL Post-Season All-Star after putting up a .314 batting average at High-A Clearwater and threw out 40% of runners attempting to steal.

Other returnees include infielder Levi Hyams along with outfielder Matt Lipka. In addition to Albies and Lien, fans will see several new faces at the plate. Infielders include Johan Camargo, Carlos Franco, Jordy Lara and Jacob Schrader. Dustin Peterson and Dian Toscano are all new to the M-Braves outfield.

There are currently 29 guys on the M-Braves roster. DLs will be announce before opening day.

The Mississippi Braves open the 2016 season Thursday, April 7 with game one of a five-game series against the Pensacola Blue Wahoos. First pitch is slated for 7:00 PM. Gates open at 6:00 PM. In addition to Thirsty Thursday, the first 3,000 fans get a free M-Braves team calendar compliments of the Mississippi Army National Guard. Also, fans don't want to miss the annual Opening Night Fireworks Show after the game. Tickets are on sale now.