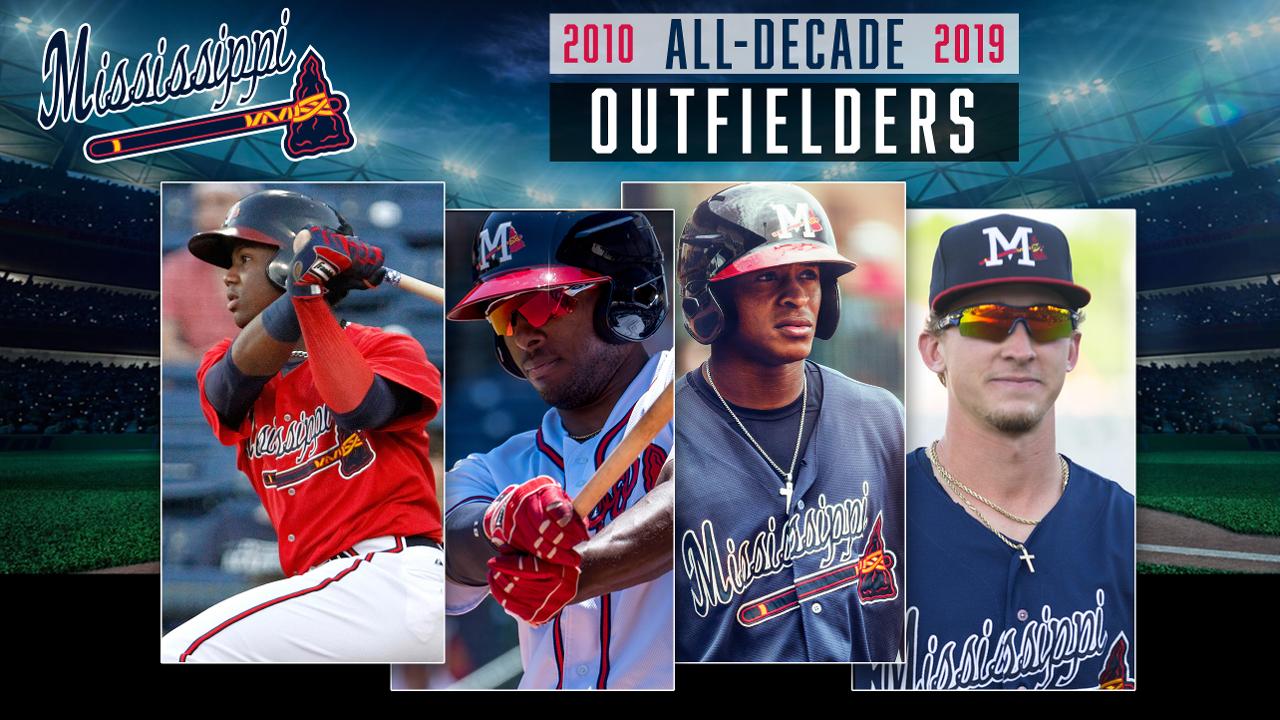 We conclude our All-Decade Team with a talented group of outfielders.

Ronald Acuña Jr. - Quite possibly the MVP of the All-Decade squad, Acuña swiftly made his way through the Atlanta farm system on his way to the majors in 2018. Acuña played just 57 games with the M-Braves in 2017, but those two months were quite possibly the most productive 62 days in club history. The 19-year-old was twice named Southern League Player of the Week, first earning the honor after batting .560 with six runs and 10 RBI from May 9-14, his first week in the league. He garnered the award again two weeks later after hitting .417/.400/.667 from May 22-28, also earning Southern League All-Star honors, despite not playing the first month in the league. Acuña hit .326 with 14 doubles, a triple, nine home runs, 30 RBI, 19 stolen bases, and a .895 OPS for the M-Braves before being promoted to Triple-A Gwinnett on July 13, after participating in the Futures Game.

On July 31, Demeritte was traded along with Joey Wentz to the Tigers in exchange for Shane Greene. At the time of the trade, he was hitting .286 with 24 home runs and 74 RBI for Triple-A Gwinnett. On August 1, the Tigers selected Demeritte's contract and promoted him to the major leagues to take the place of outfielder Nicholas Castellanos, who was also traded on July 31. He made his major league debut on August 2 against the team that drafted him, the Rangers, hitting a triple off Lance Lynn for his first MLB hit. On August 8, against the Royals, Demeritte hit his first major league home run. In 169 at-bats for the Tigers, Demeritte hit .225 with three home runs and 10 RBI.

Mallex Smith - Like Acuña, Smith made the most of his time in Mississippi - and then some. Over 57 games at the beginning of 2015, Smith hit .340 with five doubles, two triples, two home runs, 22 RBI, 23 stolen bases, 35 runs scored and a .830 OPS. Smith was named a Southern League All-Star but was promoted to Triple-A before the game was played. Smith came back to Mississippi for five rehab games in 2016 and hit .438.

The Braves promoted Smith to the major leagues on April 11, 2016. He debuted that night against the Nationals, starting in center field, going 1-for-3 in his first game, with a strikeout and a single against Max Scherzer. On January 11, 2017, the Braves traded Smith, along with Shae Simmons, to the Mariners in exchange for minor-league pitchers Luiz Gohara and Thomas Burrows. On November 8, 2018, the Rays traded Smith back to the team that drafted him, the Mariners. In 2019, Smith led the majors with 46 stolen bases and, in 2018, finished second in the AL with 40. He led the league in 2018 with ten triples. In 428 games for the Braves, Rays, and Mariners, Smith is a career .259 batter with 61 doubles, 27 triples, 13 homers, 111 RBI, 118 stolen bases, and a .696 OPS.

In a pitcher's league, Waters had a league-best 18-game hitting streak that began on June 4, batting .417 with eight doubles, two triples, two home runs, nine RBI, 12 runs, four walks, and a .462 OBP. The streaks were the longest this season in the Southern League, and the on-base streak was third-longest in club history. Waters has extended his streak 14 times during his first at-bat.