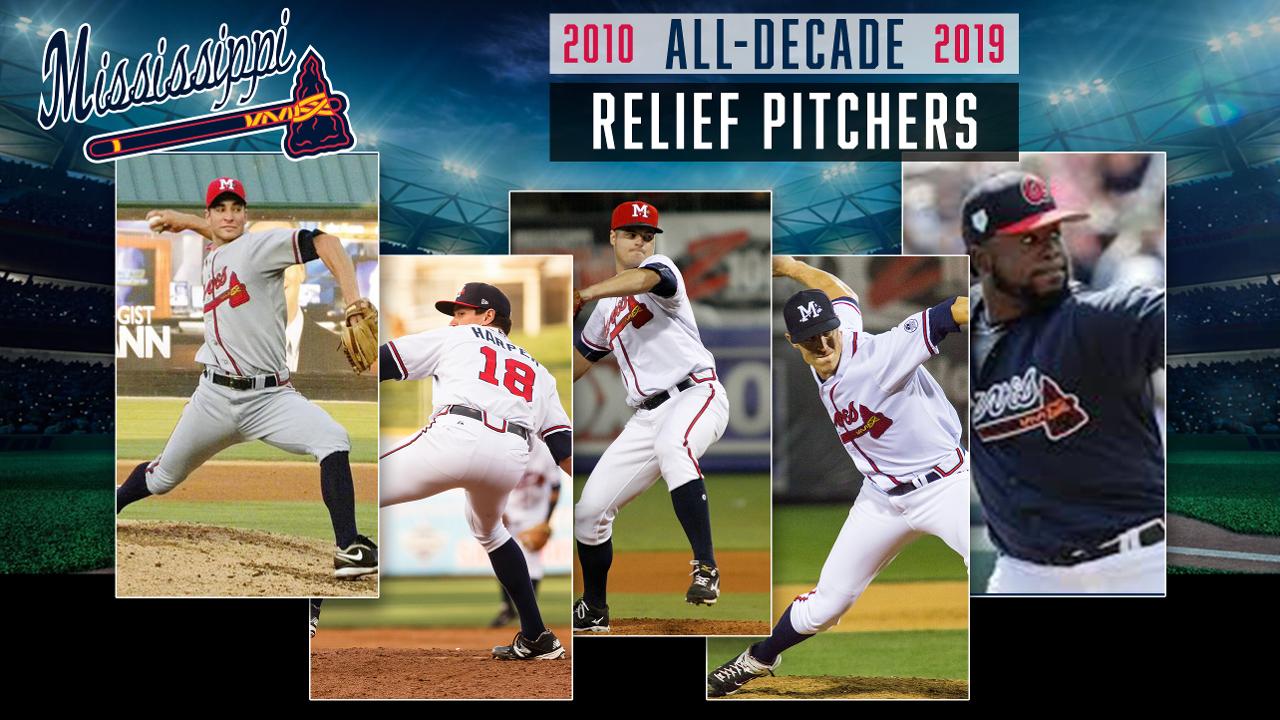 We continue with the top bullpen arms of the decade.

Brandon Beachy - A 2010 Southern League All-Star, Beachy began the decade by splitting the season between the rotation and the bullpen. The right-hander went 3-1 with a 1.47 ERA over 27 games and six starts, logging one save and posting 100 strikeouts to just 22 walks over 73.2 innings. Beachy moved to the M-Braves rotation in June, and his top performance of the season occurred on July 15 when he struck out 13 of 19 batters against the Huntsville Stars.

On December 11, 2015, Harper was sent to the Seattle Mariners to complete an earlier trade for José Ramírez. Harper was called up to the majors for the first time on May 28, 2017. He was outrighted on June 17, 2017, without making an appearance. He elected free agency on November 6, 2017. In 2019, Harper was given a non-roster invitation to Minnesota Twins major-league spring training. Harper made the Twins' Opening Day roster out of spring training. He made his major league debut on March 31, 2019, against the Cleveland Indians, recording one scoreless inning of relief. He got his first career save on May 28 against the Milwaukee Brewers and finished his rookie-season 4-2 with a 3.81 ERA over 51 games with 50 strikeouts and ten walks over 54.1 innings.

Mark Lamm - The 2013 Southern League All-Star is the lone member of this section that did not make a major league debut. Lamm made his mark on the franchise with the second-most appearances (114) and fourth-most saves (21) in club history. Lamm finished 7-11 with a 3.22 ERA, and 21 saves over parts of three seasons in Mississippi. The former sixth-round selection out of Vanderbilt struck out 124 and walked 61 over 114 games and 148.1 innings.

Lamm had ten saves and posted a 2.56 ERA 35 games in 2013 and earned a promotion to Triple-A Gwinnett late in the season.

Arodys Vizcaino - Vizcaíno was traded from the Yankees to the Atlanta Braves with Melky Cabrera, Mike Dunn, and $500,000 in exchange for Javier Vázquez and Boone Logan on December 23, 2009. The hard-throwing right-hander made his way up to Double-A in 2011 and went 2-3 with a 3.62 ERA primarily as a starting pitcher, striking out 62 and walking just 18 over 15 games, eight starts, and 54.2 innings.

Vizcaíno was called up to the majors for the first time on August 10, 2011. He made his MLB debut that day, pitching in relief, walking two batters and hitting another in the ninth inning. Vizcaíno earned his first MLB win in the Braves' 2-1 extra-inning victory over the San Francisco Giants on August 16. In 17 games with the Atlanta Braves, Vizcaíno had a 1-1 record, 4.67 ERA and 17 strikeouts in 17.1 innings. After a stint with the Cubs, the Central Division club traded Vizcaino back to Atlanta in 2014, and three international signing bonus slots to the Braves for Tommy La Stella and an international signing bonus slot. In parts of seven MLB seasons, Vizcaino is 13-11 with a 3.01 ERA, 50 saves, with 218 strikeouts, 90 walks in 206 games over 194.1 innings.