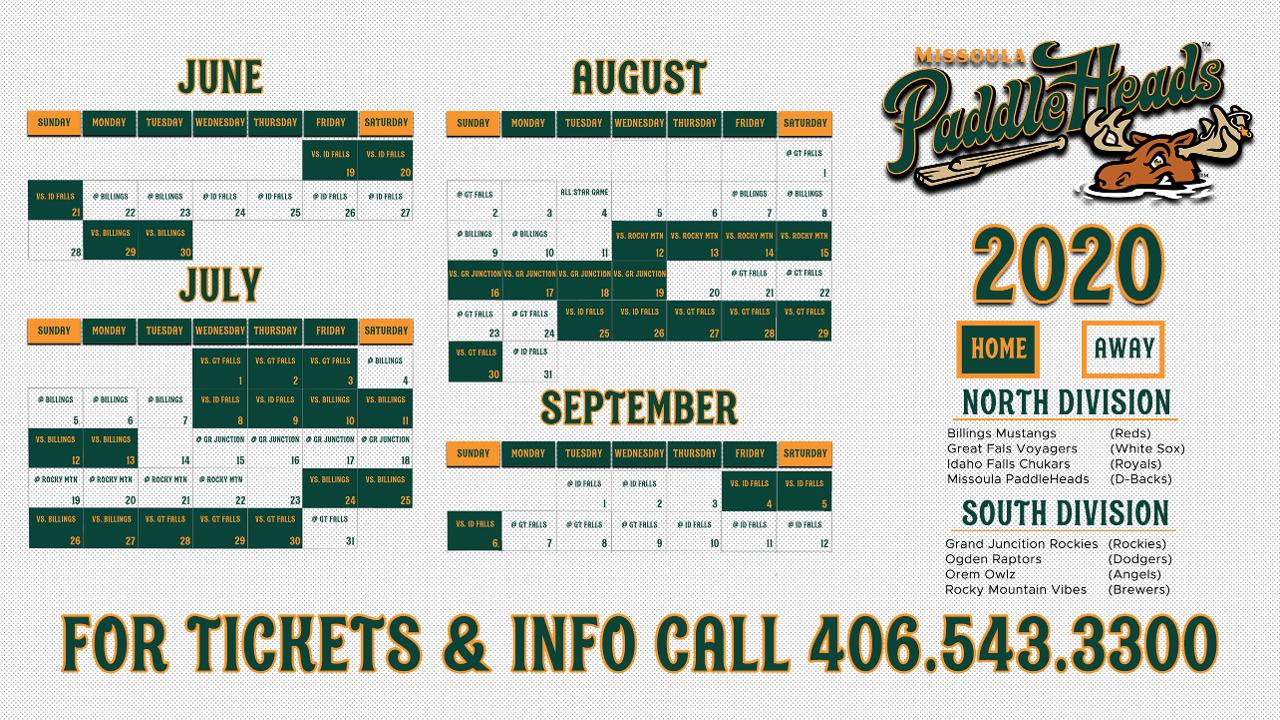 The Missoula PaddleHeads, in conjunction with the Pioneer League, released their game schedule for the 2020 season today. For the first time ever, the new look PaddleHeads will take the field as they open the franchise's 22nd season in Missoula with a three-game slate against the defending Pioneer League Champion Idaho Falls Chukars.

In all, over 1,000,000 fans have gathered to watch professional baseball at Ogren Park Allegiance Field since 2007. This year, the regular season runs from June 19 to September 12. The PaddleHeads will finish the regular season home slate with a three-game series versus the Idaho Falls Chukars (September 4 - 6), and wrap up the 2020 campaign on the road with seven games versus the Great Falls Voyagers (September 7 - 9) and the Idaho Falls Chukars (September 10 - 12).

Although a complete promotional calendar will be released at a later date, the PaddleHeads are planning to host their 16th Annual Independence Day Fireworks Celebration following the game on Friday, July 3, and two additional Firework displays. Fans can also expect the return of Pride Night, Indigenous Celebration, Jack's Pub Parties, and a series of exciting new promotions!

"We are so excited to start the PaddleHeads era at home on June 19th," explained PaddleHeads VP Matt Ellis. "We completed a bunch of improvements to the stadium and our product last season. Our staff is working hard to build off of the new videoboard, our improved promotional show, the statewide and national broadcasts on SWX and MiLB.tv, our new neighborhoods in the stadium like Jack's Pub and the All-You-Can-Eat section, and the great energy our franchise has moving forward. I am looking forward to our future release of our new promotional calendar so fans can see our team's plan to make PaddleHeads games more fun than you can imagine. We are the best family entertainment value out there."

As members of the Pioneer League's Northern Division, the PaddleHeads will compete with two Montana teams and one from Idaho (Idaho Falls, Great Falls and Billings) for the division title. Since the 2019 restructure of the Pioneer league, the PaddleHeads will play host to the Southern Division Grand Junction Rockies for the first time since 2018, and welcome the Rocky Mountain Vibes (Colorado Springs) for their first trip to Missoula since the club's relocation from Helena. The 76-game schedule will once again be split into a two-half-season format with the first half ending July 29. The winners of each half for each division advance to the post-season. Here are the division alignments along with the affiliates for each of the teams:

Included in the schedule for 2020 is the sixth ever Pioneer League-Northwest League All-Star Game. The 2020 version will be hosted by the Rocky Mountain Vibes at UCHealth Park in Colorado Springs, CO., Tuesday, August 4. The game will highlight the future of Major League Baseball with some of the top talent from both leagues.