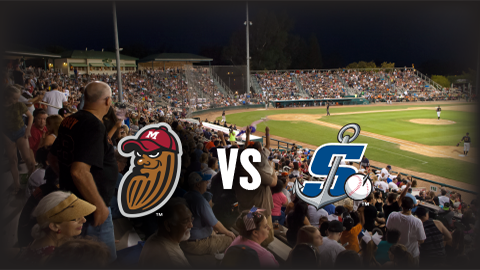 MODESTO, CA. - It only took three hits for the Modesto Nuts to defeat the Stockton Ports in walk-off fashion 2-1 in ten innings at John Thurman Field.

The win keeps the Nuts 1.5 games back of the Giants for the final playoff spot.

Modesto starter Penn Murfee worked around three hits allowed over five scoreless innings while striking out five. Ports starter Hogan Harris pitched four scoreless, hitless innings to open the ballgame. Harris set down the first nine batters he faced and was able to work around a pair of walks issued in the fourth inning to complete his outing.

After Will Gilbert worked two perfect innings beginning in the fifth, Ty Damron came on to work the seventh and worked around back-to-back walks that started the inning, getting a double play and a strikeout to keep Modesto hitless through seven. In the eighth with one out, Ariel Sandoval finally got Modesto into the hit column with a clean single to left field. Sandoval, though, would subsequently be caught stealing for the inning's final out. Damron allowed one hit while striking out two over two innings.

Collin Kober and Matthew Willrodt combined on three scoreless innings in relief of Murfee beginning in the sixth. Nick Duron (3-1) took over in the ninth and, after working a scoreless frame, pitched into the 10th. With Robert Mullen at third base and two outs in the top of the 10th, Payton Squier lined a double to right field over the head of Sandoval to score Mullen and give the Ports a 1-0 lead.

Angel Duno (0-2), after working a perfect ninth, came back for the 10th. With Julio Rodriguez at third base and one out and the infield in, Duno induced a pop-fly to the rim of the outfield grass. Second baseman Ryan Gridley, racing back from his shallow position, was unable to get underneath the pop-fly and saw it drop, a single that allowed Rodriguez to score the tying run. With Scheiner at first base and one out, Jack Larsen came up and lined the game-winning double to the alley in left-center field that gave Modesto a 2-1 victory.

Duno suffered the loss while Duron picked up the victory for Modesto. The eighth consecutive loss marks a season-long skid for Stockton.

The Nuts start their final series of the season on Friday night at 7:05 p.m against the Rawhide. Coverage on ModestoNuts.com will start at 6:50 p.m. Listen live online on your phone, tablet or PC by clicking HERE.