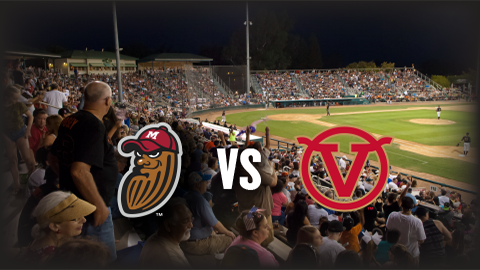 MODESTO, CA. - A strong pitching performance sent the Modesto Nuts to a 9-2 loss against the Visalia Rawhide on Friday night at John Thurman Field.

With the Giants losing, the Nuts remain 1.5 games back of the final playoff spot with three games to go.

Justin Vernia (W, 8-3) heaved seven innings for the victorious Rawhide (82-51; 38-29). The first hit by the Nuts (63-74; 33-34) came in the fourth inning when Joe Rizzo doubled as part of a multi-hit game. The Nuts loaded the bases with three singles in the fifth but a double play got Vernia out of that jam. Vernia allowed just five hits while striking out seven and walking two.

The Nuts got their lone runs in the eighth when Keegan McGovern homered and Rizzo recorded a RBI single.

The Rawhide did their work early against Nuts starter Austin Hutchison (L, 5-12). A lead-off walk scored on an error in the first. In the third inning, Alek Thomas lifted a two-run homer. Overall, Hutchison lasted 3.1 innings while allowing six runs, four earned on six hits.

Scott Boches had the best night out of the bullpen tossing 2.1 perfect innings with three strikeouts.

The Nuts host the Rawhide in the second of a four-game set on Saturday night at John Thurman Field. First pitch is at 7:05 p.m. Coverage on ModestoNuts.com will start at 6:50 p.m. Listen live online on your phone, tablet or PC by clicking HERE.