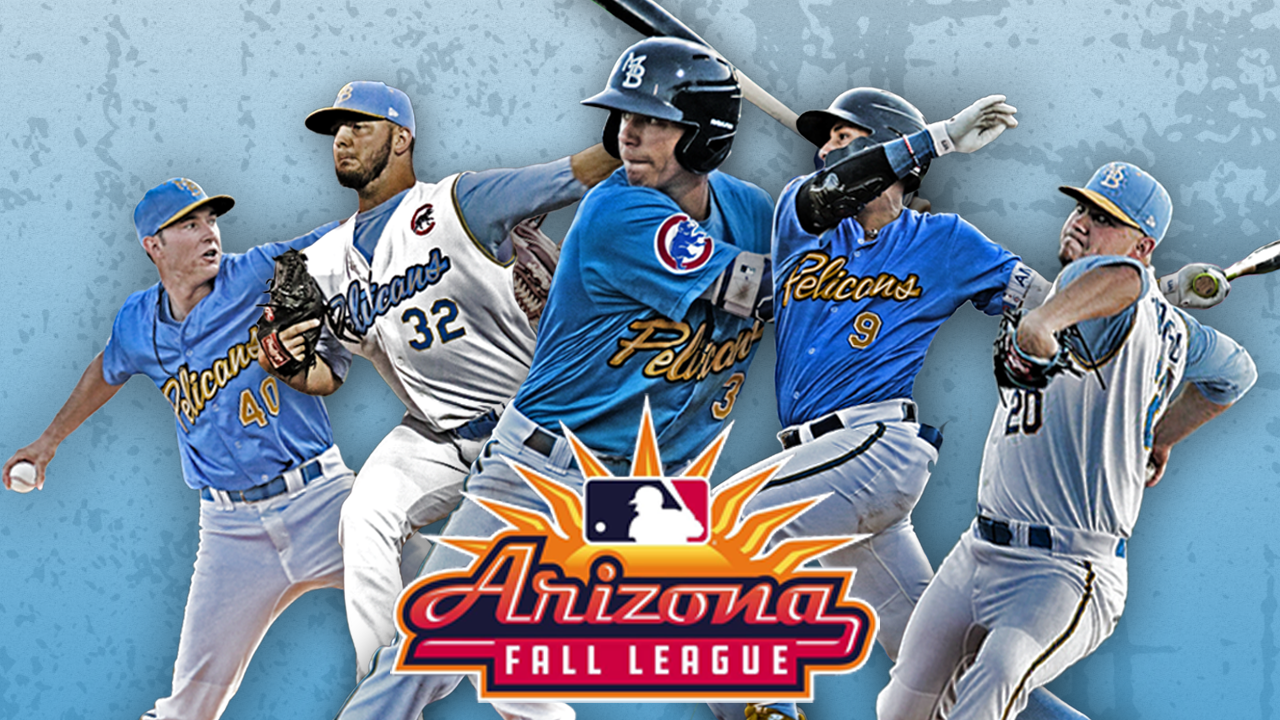 The duo will be joined by three other Myrtle Beach alumni (left-handed pitcher Jordan Minch , right-handed pitcher Keegan Thompson and first baseman Jared Young ) in playing for the Mesa Solar Sox. Prospects from the Cleveland Indians, Detroit Tigers, Los Angeles Angels and Oakland Athletics will also take the field for Mesa, whose home games will take place at Sloan Park, the Spring Training home of the Cubs. Alex Lange , who was traded alongside Paul Richan to the Detroit Tigers for Nick Castellanos at the trade deadline on July 31, will play for the Solar Sox as well.

Amaya, the No. 2 prospect in the Cubs organization and No. 88 overall prospect according to MLB.com, leads all of Minor League Baseball with 45 runners caught stealing this season. The 20-year-old catcher is hitting .237/.355/.405 through 98 games with the Pelicans this season and he is second on the team with 11 home runs. In his first stint in the Carolina League, Amaya is having a monster second half and is slashing .256/.356/.448 with a OPS of .804. The Chitre, Panama native has represented the Chicago Cubs in the Future's Game in each of the last two season.

Uelmen, who is currently with Double-A Tennessee, began his 2019 season on the Grand Strand before earning a promotion on July 31. The 23-year-old was 5-3 with a 3.05 ERA in 11 starts with the Pelicans and he is ranked as the Cubs' No. 24 prospect by MLB.com. Since his promotion, Uelmen is 0-2 with a 6.84 ERA with Tennessee.

Minch, was with the Pelicans for parts of three seasons from 2016 to 2018 and his currently rostered at Double-A Tennessee. With the Pelicans, Minch is tied for second in franchise history with 76 career appearances and was 4-6 with a 4.42 ERA out of the bullpen. In 2019 with Tennessee, Minch is 5-5 with a 4.77 ERA and three saves on the year. He leads Tennessee in appearances and is second in the Southern League with 43 outings on the season.

Thompson, who is currently on a rehab assignment with the Arizona League Cubs will represent the Cubs in the Arizona Fall League after playing with the Pelicans in 2018. The former third-round pick out of Auburn University was 3-3 with a 3.19 ERA with Myrtle Beach in the first half of 2018 before he was promoted. Thompson opened this season in Double-A and made one start for the Smokies in which he tossed five hitless innings and struck out eight, but the righty has been on the Injured List since April 11.

Now a member of the Detroit Tigers organization, Lange will also suit up for Mesa this fall. In 11 starts in 2019 for Myrtle Beach, Lange was 1-9 with a 7.36 ERA before he was promoted to Double-A Tennessee on June 20. With the Smokies, Lange logged seven starts and was 2-3 with a 3.92 ERA. With the Erie Seawolves, the Double-A affiliate of the Tigers, Lange has made seven appearances out of the bullpen and has allowed six earned runs in 11.2 innings of work.

The Cubs will also send their No. 1 overall prospect, Nico Hoerner to Arizona this fall. Hoerner played with both Short Season Eugene and Low-A South Bend in 2018 after being selected out of Stanford in the first round of the 2018 MLB draft. Hoerner skipped Myrtle Beach this year and went straight to Double-A where he has slashed .281/.343/.406 with the Smokies in 2019.

The 2019 season is the 21st season for the Pelicans franchise and fifth as the Class-A Advanced affiliate of the Chicago Cubs.

For more information or to purchase tickets visit myrtlebeachpelicans.com or call 843-918-6000.