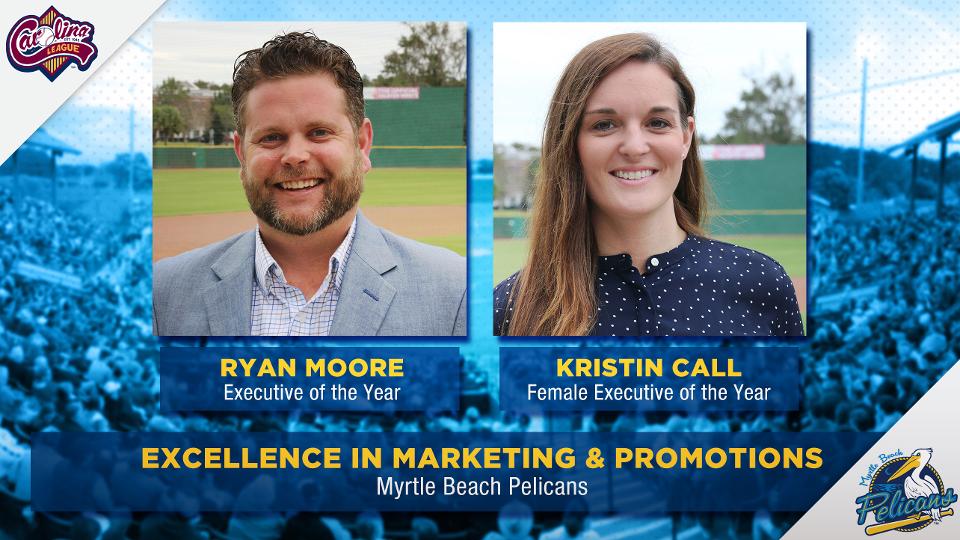 The Excellence in Marketing and Promotional Award honors a club that demonstrates outstanding and creative marketing and promotional efforts within its community, its ballpark, in media and other outlets.  This is the third time the Pelicans have received this award.  The organization was also honored in 2014 and 2015.

The Birds' 2019 promotional schedule was highlighted by return of fan favorite weekly promotions as well as the addition of new promotions that drove just under 20,000 additional fans to the box office over the 2018 season.  The Pelicans had three nominations for Minor League Baseball's annual Golden Bobblehead Awards and was crowned the Promotion of the Month winner for May with their Derby Eve theme.  The team also made considerable efforts to drastically improve the "nightly show".  With a combination of small tweaks and massive show enhancers that included fire cannons, CO2 guns, and an entertainment package to accompany the installation of new LED stadium lights, the team received rave reviews nightly from fans across the country.  The Birds also saw big gains across all major social platforms including Twitter, Instagram, and Facebook.  Additionally, the team benefitted from national recognition on ESPN, WGN and more, as well as regional exposure through eight televised games on the CW.

Team President Andy Milovich hired Moore in September of 2014 to lead all contracted revenue sales for the organization.  Under Moore's guidance in his year as the Pelicans General Manager, the team established new franchise records across numerous categories.

A few of Ryan's highlights beyond sales and revenue in his inaugural year as GM included overseeing the upgrade to LED stadium lights at TicketReturn.Com Field, being the driving voice behind an improved fan experience, and leading by example in his service to the community through his time with Habitat for Humanity and more.

"I couldn't be more proud of the staff that we've built in Myrtle Beach over the last 7 years," said Milovich.  "Ryan and Kristin have been an incredible asset to both the Pelicans and the community.  Their commitment, work ethic and leadership have built a culture that is second to none in Minor League Baseball."

Call, who just completed her 14th season in MiLB, has been a leader within the Pelicans organization for the last six seasons.  With a reorganized executive structure prior to the 2019 season, Call embraced her new role in an ever increasing leadership position.  She provided essential support to allow for a successful transition that saw the team reach heights never attained before.

In addition to her involvement with all aspects of running an organization, Call's core responsibilities fall under the marketing and promotions departments.  Under Kristin's management, the Pelicans saw a 403% Return on Ad Spend in digital marketing.  She also leads by example in community giveback and serves the Grand Strand Community through a variety of organizations. This marks the third time Call has received this award.  She was honored by the Carolina League in 2015 and also in 2012 when working in the South Atlantic League.

"Without a doubt, the successes of 2019 would not have been possible without Kristin," stated Moore.  "We are proud to have her represent the organization and league as our nominee for the national Rawlings Woman Executive of the Year Award."

Since 1976, the Rawlings Woman Executive of the Year Award has been presented annually to a woman who has made outstanding contributions to her club or league, or to baseball.  This award, along with the Larry MacPhail Award, and others will be presented in December at the Baseball Winter Meetings.

The Pelicans return to TicketReturn.Com Field at Pelicans Ballpark in 2020 marks the 22nd season for the franchise and sixth as the Class A-Advanced affiliate of the Chicago Cubs.  For more information about the club or season memberships, visit myrtlebeachpelicans.com or call 843-918-6000.