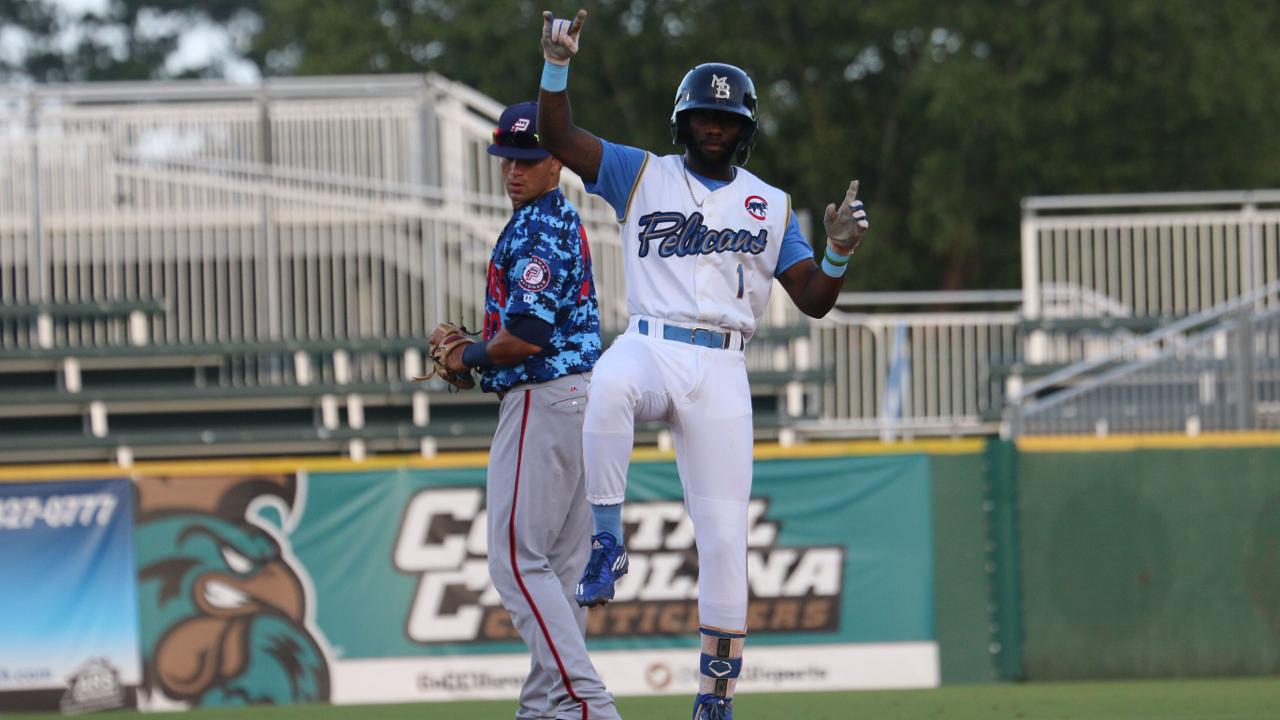 Delvin Zinn smashed three hits as a part of a 3-for-5 night in the Pelicans' loss to Wilmington. (Larry Kave - Myrtle Beach Pelicans)

WILMINGTON, De. (August 30, 2019) - The Myrtle Beach Pelicans came back from down three runs to tie the game on Friday, but fell to the Wilmington Blue Rocks 6-4 in the series opener from Frawley Stadium.

Wilmington (81-55, 37-30) was the first team to strike, finding the scoreboard in the second inning. Tyler Hill reached on an error to open the inning and scored from first on a double from Dennicher Carrasco that made it 1-0 Wilmington. The Blue Rocks took a 2-0 lead when MJ Melendez drove in Carrasco with a single to left.

The Pelicans (54-80, 33-34) cut the gap in half in the top of the third inning. Delvin Zinn singled to lead off the frame and subsequently stole second base to move into scoring position. Carlos Sepulveda then grounded an infield single down the third base line and a throwing error from Kyle Kasser allowed Zinn to score from second and cut the deficit to 2-1.

The Blue Rocks padded their lead in the fourth inning when Hill tripled to lead off the inning and Carrasco blasted a two-run homer to center off of Javier Assad which extended the lead to 4-1.

In the top of the fifth, the Pelicans evened the score at 4-4. Zinn doubled and advanced to third on an error to lead off the frame and came in to score on a sacrifice fly from Miguel Amaya , making it a 4-2 ballgame. Two batters later, Grant Fennell drove in Sepulveda with an RBI single to cut that gap to 4-3 and Kevonte Mitchell tied up the score with an RBI single to cap off the three-run frame.

Ethan Roberts (L, 1-3) took over on the hill for the Pelicans in the sixth and after he tossed a scoreless inning, the Blue Rocks got to him for a run in the seventh. Colby Schultz blooped a single into right to start the inning and after the Blue Rocks loaded the bases, Michael Gigliotti grounded into a double play and Schultz came in to score to make it 5-4 in favor of Wilmington.

The Blue Rocks added on some insurance in the bottom of the eighth inning when Schultz drove in Carrasco with an RBI single and increasing the advantage to 6-4.

Walker Sheller (W, 1-2) tossed a pair of scoreless innings out of the bullpen to earn the win for the Blue Rocks.

The Pelicans will look to even the series at one game apiece on Saturday night at 6:05 p.m. RHP Alexander Vargas (2-4, 4.74) will take the hill for the Pelicans in game two against LHP Kris Bubic (6-4, 2.45) for the Blue Rocks. Coverage starts at 6:50 p.m. on MyrtleBeachPelicans.com/Broadcast and the MiLB First Pitch and TuneIn Apps.

The 2019 season is the 21st season for the Pelicans franchise and fifth as the Class A-Advanced affiliate of the Chicago Cubs. For tickets visit MyrtleBeachPelicans.com/tickets, call (843) 918-6000, or visit the Pelicans Box Office.