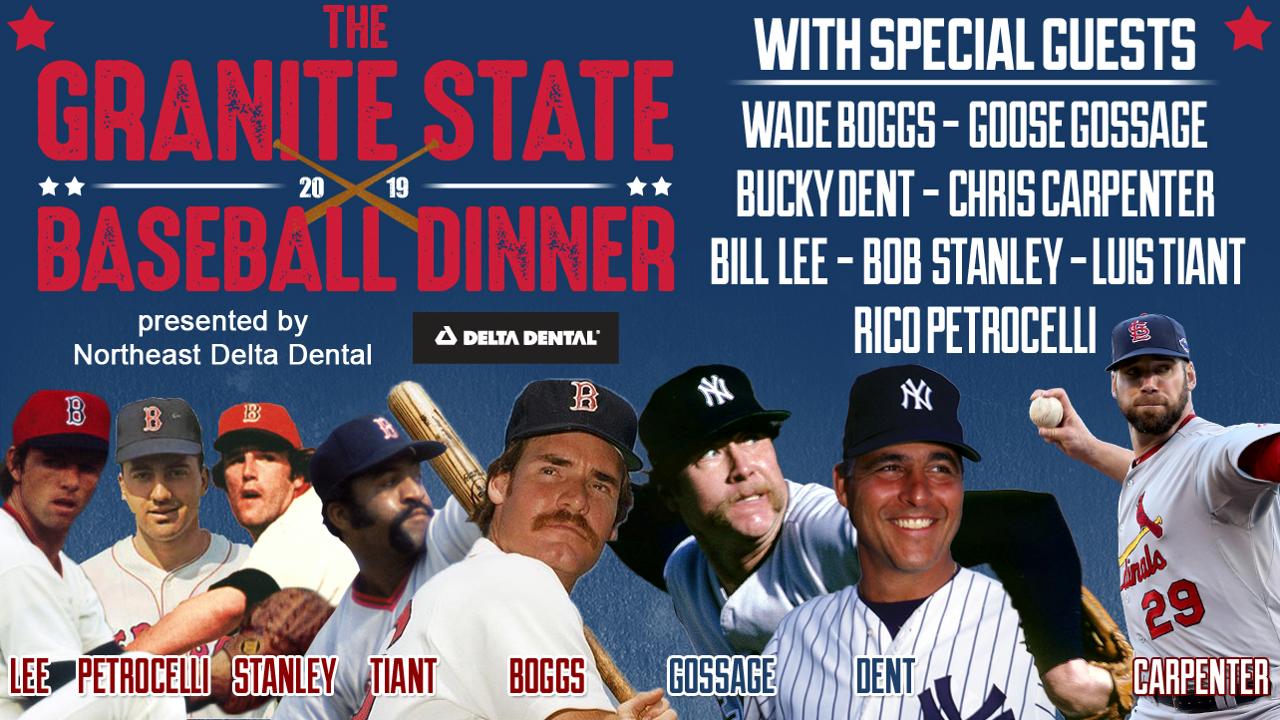 This year's fundraising event will be held on Saturday, November 23 at 5 p.m. at the DoubleTree by Hilton Manchester Downtown Hotel Expo Center. Since 2007, the event has hosted over 13,000 guests and donated more than $1.75 million to the Children's Hospital at Dartmouth-Hitchcock (CHaD) and the Fisher Cats Foundation. Tickets are available at NHFisherCats.com.

Hall of Famers Goose Gossage and Wade Boggs headline the 2019 celebrity guest list, along with several other Red Sox and Yankees legends: Bucky Dent, Bill Lee, Luis Tiant, Rico Petrocelli and Bob Stanley. The players will sign autographs from 5 - 7 p.m., and share stories from their careers and the greatest rivalry in baseball during the subsequent dinner program.

New Hampshire's own Chris Carpenter  will join the festivities, as the 2005 Cy Young Award Winner and two-time World Series Champion continues to donate his time to raise funds for the Children's Hospital at Dartmouth-Hitchcock and the Fisher Cats Foundation.

Goose Gossage, a 2008 Hall of Fame inductee, will make his first appearance at the Granite State Baseball Dinner. Gossage pitched for nine teams in his 22 big league seasons, including seven with the Yankees (1978-1983, 1989). He was a nine-time All-Star and led the major leagues in saves for three years, including the 1978 World Series Championship season.

Bucky Dent, a prominent figure in the Red Sox - Yankees rivalry, will make his Granite State Baseball Dinner debut. Dent is best known for his three-run home run in the 1978 American League East Tiebreaker Game. With New York trailing 2-0 in the top of the seventh, Dent's go-ahead homer eventually led the Yankees to a 5-4 victory and a playoff berth. He was named 1978 World Series MVP, hitting .417 with 7 RBI in the six-game series win over the Dodgers.

Red Sox greats and popular baseball dinner mainstays Bill Lee, Bob Stanley, Rico Petrocelli and Luis Tiant -- who all played against Gossage and Dent in the 1970s -- will return to Manchester in 2019.

"When it comes to the best rivalries in sports, it doesn't get any better than Red Sox - Yankees," said Fisher Cats President Mike Ramshaw. "The Red Sox have had the upper hand in recent years, but there's a lot of history between these two teams, and I know this year's celebrity guests will have plenty of stories to tell."

Doors to the event will open at 5 p.m. with a silent auction and an autograph session with the honored guests from 5-7 p.m. The dinner and the evening's program will begin at 7 p.m.

The primary beneficiary of the dinner is the Children's Hospital at Dartmouth-Hitchcock (CHaD). CHaD, New Hampshire's comprehensive, full-service children's hospital, is committed to providing outstanding compassionate care for children and their families. Offering primary, specialty, and tertiary care to the children of New Hampshire, Vermont, and beyond, their focus includes keeping all kids healthy and safe.

The Ted Williams Foundation works to preserve and build on the rich tradition of our national pastime through education and outreach. Proceeds from the Granite State Baseball Dinner are instrumental in the Foundation's mission to provide youth baseball programs and scholarships for deserving student-athletes. The Foundation is also an active partner with the Rays, Red Sox, Twins, Orioles & Phillies Organizations raising funds to provide assistance to their many charitable programs including the Boys & Girls Club, Pediatric Cancer, Animal Shelters and youth Diabetes programs.

For tickets and information, visit www.nhfishercats.com.