A's No. 26 prospect starts strong with Vermont after elbow injury 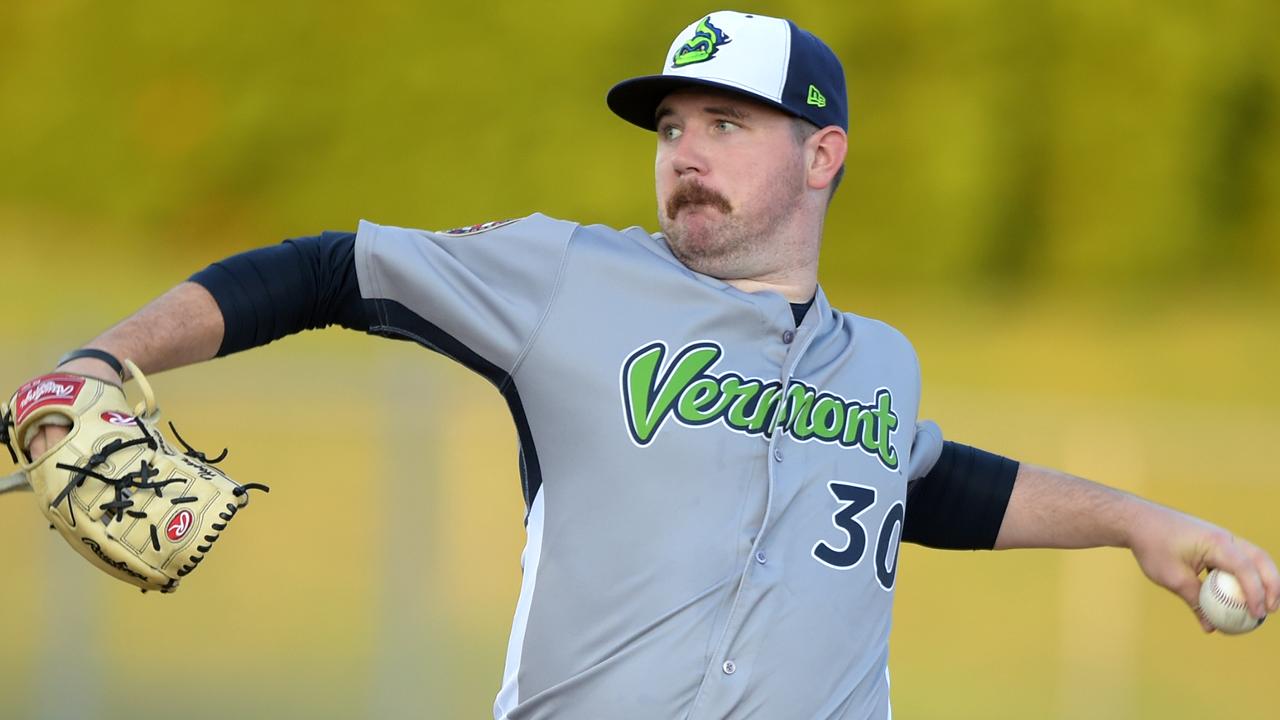 In his first pro season, Hogan Harris has a 2.70 ERA with 33 strikeouts over seven appearances for the Lake Monsters. (Kevin Pataky/MiLB.com)

The first pitch of Hogan Harris' pro career was a year in the making, so you can forgive the fact that it went awry, hitting the batter.

Oakland's third-round selection in 2018 out of Louisiana-Lafayette, the left-hander was forced to take the slow road to his premiere due to an elbow sprain.

"For the most part I was rehabbing because I had the little elbow issue," said the Athletics' No. 26 prospect. "We got that taken care of. It's my first year -- there's no need to try and rush anything and have setbacks. So, we decided to not rush anything, make it easier."

Harris spent much of his time working out at the A's facilities in Mesa, Arizona, keeping busy so the time went by quickly enough, save for the final stretch.

"Once I started building innings up and got to three, four innings out in Arizona, I was counting the days," he said. "The 10, 11 months that I was there went by so quick, but that last month felt like a year in itself. Once I finally got out, it was awesome."

First pitch aside, everything is feeling great for the Louisiana native, who has settled in nicely for the Lake Monsters, working with a pitch count around 60 as he continues to ease his body into things.

Returning to New England for the third straight summer -- the prior two were spent playing in the Cape Cod League -- he has been energized in getting back to throw competitive innings, in front of crowds equally as amped up.

"It was absolutely amazing. The fans in Vermont, there's way more than I thought there would be," Harris said excitedly. "There are 2,000 to 3,000 [fans] every game out here. Having that live feeling again, hearing the people cheer, even though for the most part I don't hear anything when I'm actually pitching, but just being here is amazing."

While he admits that his fastball was hitting around 88-91 mph when he first landed with Vermont, he's been around 93-94 mph over his last few starts, striking out 19 batters over his last 11 1/3 frames.

As with everything, he has found that the slow and steady approach is working in his and the organization's favor.

"Everything's starting to come back. I'm getting really in sync again and everything is feeling good," said Harris. "Everyone knows in the past I've had nagging injuries. So, my main thing for this year is to stay healthy, keep up with the little things."

Willing and able: Batavia's Nic Ready is making the most of his balls in play. Of his 33 hits, which is tied for fourth in the league, the corner infielder has 20 extra-base hits. Miami's 23rd selection out of the United States Air Force Academy in June is the league leader with 18 doubles, six more than the next closest player. Nine of Ready's last 15 hits have been two-baggers.

In control: Hudson Valley hurler Zack Trageton is 5-2 on the season, earning a decision in each of his seven appearances. The right-hander has a 2.11 ERA, good enough for sixth among qualified pitchers. His 0.78 WHIP is second best, thanks largely to not having yielded a walk in 38 1/3 innings. Going back to last season, when Trageton made three appearances with the Renegades, he now has 54 1/3 walk-free innings and only 39 hits against him.

Leaps and bounds: With 190 runs scored in 36 games, State College has a 25-run lead on the competition. If they can keep up their 5.3 runs-per-game average, they would become the first team to eclipse more than five runs per game since they averaged 5.2 for an entire season in 2014. The 2012 season saw Auburn average 5.7 and Tri-City 5.4 per game.