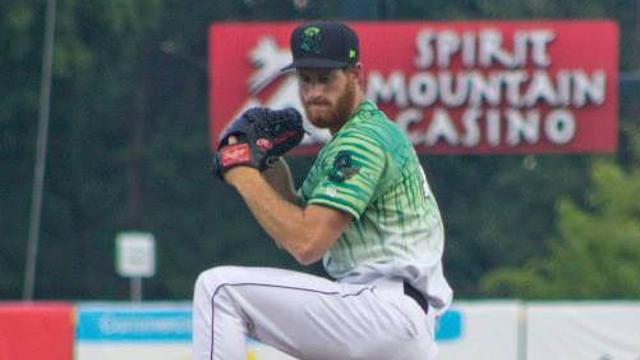 Michael Kelly has not allowed a run in three of his last four starts for Eugene. (Eugene Emeralds)

As any grateful pitcher does at the conclusion of one of his best days, Michael Kelly knew where to give the credit on Saturday night: his defense. Modesty or not, he was impressive in his own right, too.

"It was a good night," Kelly said. "I felt good on the mound. I was tossing it with everything I had, but most of all, the defense was making plays behind me. It always makes it easier to pitch with a defense behind you. You just know that you can fill up the strike zone and your guys will be there for you.

"It helps a ton as a pitcher, knowing that your teammates are going to pick you up even if you make a mistake over the plate and a guy hits it hard. They'll be there to run it down."

While Kelly (7-4) racked up strikeouts with regularity, he also put his team's gloves to work, recording four outs on the ground and four through the air.

"I think it was the ability to mix all the stuff," he said of Saturday's keys. "My fastball felt good. The slider also felt good. The sequences and my tempo pitching were better than other nights."

"Me and [catcher Jose] Ruiz were on the same page the whole night. Whatever he called, I felt comfortable throwing it. I felt like he was making good pitch calls. As the game went on, I was getting more comfortable with everything I had."

The only baserunner Kelly allowed was Adam Martin, who drew a two-out walk in the bottom of the first. After that free pass, he retired the final 16 batters he faced. It was the 10th time this season the 21-year-old right-hander has gone at least five innings.

"I feel good going five, six innings," he said. "Typically, I'll get better as a game goes on. I've always felt more comfortable as a starter, and I think my defense knows that every time I go out, I'm going to give them everything I've got. They're going to do the same for me."

Drafted 48th overall out of West Boca Raton Community High School, Kelly is back in Eugene for the second straight season after seeing time in the Rookie-level Arizona League and with Class A Fort Wayne in 2012 and with Fort Wayne again for part of last season. An emphasis on repeating his delivery has produced more consistency this year as Kelly has put up scoreless outings in three of four starts since Aug. 8.

"In past years, [my mechanics] were all over the place," he said. "I would feel good with them one night and the next night, they weren't there at all. This year, it's just been a matter of taking my mechanics in every night."

Eugene got the only run Kelly needed in the top of the first on Nick Torres' RBI groundout. Auston Bousfield homered leading off the fourth to cap the scoring.

Everett's Dan Altavilla (5-3) matched Kelly's strikeout total and did not issue a walk but gave up two runs -- one earned -- on four hits over six innings.