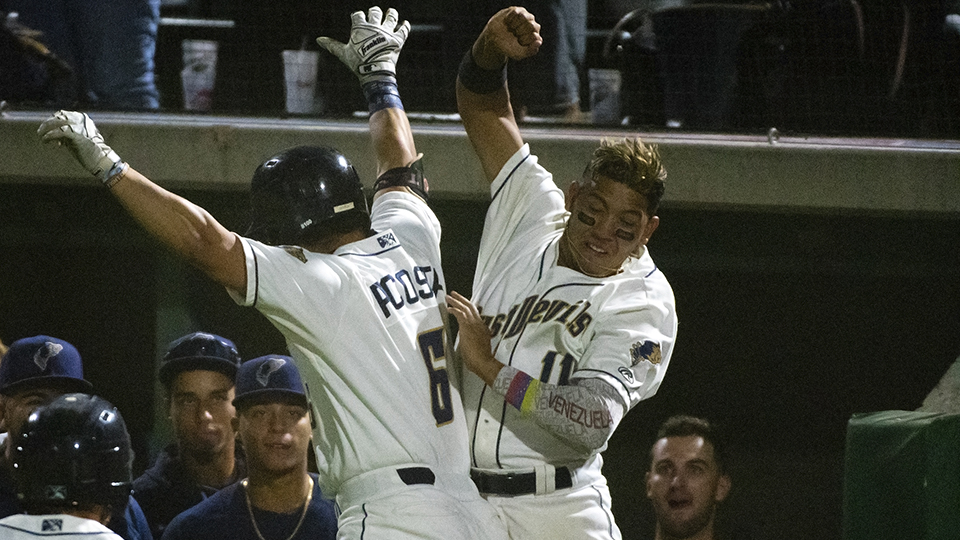 From the nine-hole, Matthew Acosta led the charge in keeping Tri-City's season alive on Tuesday.

The Padres' 12th-round pick in this year's Draft belted a two-run homer and scored twice to help the Dust Devils to a 6-0 win over Hillsboro at Gesa Stadium in Game 4 of the best-of-5 Northwest League Finals. The teams will play a winner-take-all Game 5 on Wednesday.

Acosta was happy to be the driving force in the victory but ultimately was excited simply for the team to earn the chance to play one more game.

"It's a great feeling just because we've grinded the whole time," he said. "Spokane was a great [semifinal] series, so happy we won that, now we're a game away from a ring. ... Gonna be hard to sleep tonight."

Acosta helped make some noise in the bottom of the second inning. With two outs and Luke Becker on first base, the 21-year-old crushed his first career postseason jack over the fence in right-center field to open the scoring and light a fire under the Dust Devils.

"Everybody was excited, just because ... our backs were against the wall," he said. "Any lead is a great lead. ... We just took off from there."

After he grounded out to end the fourth, his teammates put on a display of patience at the plate the next inning. Reinaldo Ilarraza and Jordy Barley opened the frame with walks against left-hander Liu Fuenmayor and Logan Driscoll grounded into a forceout that sent Barley to the dugout and put runners on the corners.

The Hops turned to Yan Sanchez, who issued three consecutive walks that produced a pair of runs and blew the game open. He exited in favor of fellow right-hander Justin Garcia, who gave up a sacrifice fly to Nick Gatewood that plated Kelvin Melean and increased Tri-City's lead to 5-0.

Even though the Dust Devils had enough run support by that point, Acosta knows their ability to tear through the Hops' arms could prove pivotal in Game 5.

"It was really crazy," he said. "We just wanted to today specifically, just grind out at-bats. Like you said, backs against the wall. You've just got to grind out every at-bat, get their arms from the 'pen on the mound just to kill their 'pen. ... Hopefully, we killed some of their arms for tomorrow."

Acosta led off the sixth with a single to left and quickly advanced on a wild pitch by righty Jake Polancic. After Ilarraza walked and Barley beat out a bunt single, Driscoll floated a sacrifice fly to right that capped the scoring.

Three hurlers linked up for the shutout. Southpaw Jason Blanchard allowed one hit and two walks while striking out three over three frames to start the game. Righty Wen-Hua Sung (1-0) fanned three over two innings and lefty Ethan Elliott whiffed seven over the final four frames for the save.

"When our offense and our pitching are going at the same time, I don't think there's anybody than can beat us," Acosta said.

The decisive fifth game is Wednesday night at Tri-City. And while Acosta's rookie campaign will end, no matter the outcome, he doesn't exactly have a leisure-filled offseason waiting for him.

Having left the University of Southern California following his junior season this summer, Acosta still has two semesters to complete. The only problem? Classes started on Aug. 26. But even as the homework assignments, missed quizzes and absences continue to pile up, both he and his professors understand that baseball remains the priority -- through Wednesday.

"I'm a little late," he joked. "But I mean, hey, as long as we keep winning, my professors will be OK with it. So, hopefully, I can go home with a ring. That would be a good excuse for missing some classes."