Speedster Dewees does it all for Emeralds 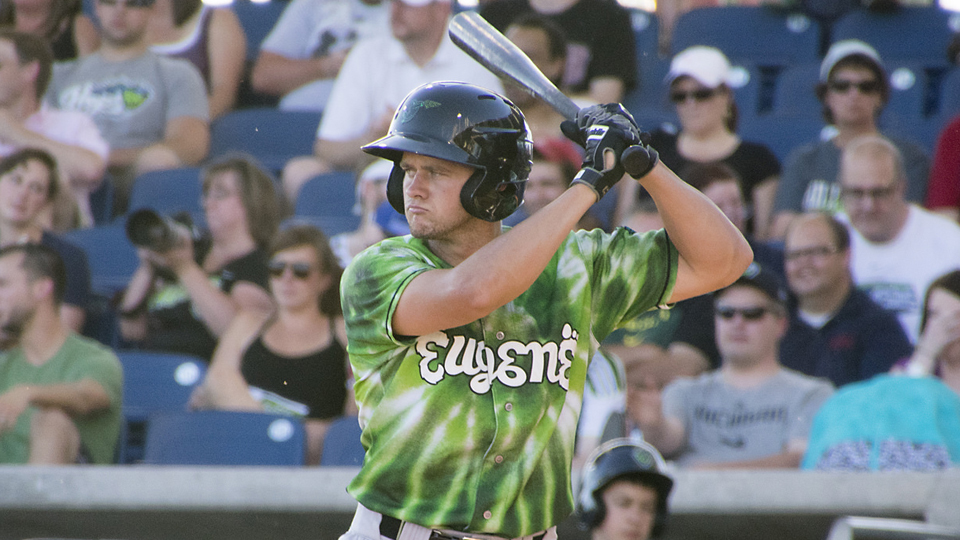 As a leadoff hitter, Donnie Dewees is enjoying the clear basepaths ahead of him. But he's also showing off the potential for power too.

"Now that I'm batting leadoff, it's different. I don't have anybody in front of me to slow me down or anything like that, so my job is to get on base, find a way to get in scoring position for the guys behind me," Dewees said. "I felt good. Just had a lot of energy and came out ready to play today, just seeing the ball well and the body's feeling pretty good."

Dewees got things started quickly for the Emeralds with a leadoff infield single in the first. The 21-year-old stole second with Frandy Delarosa at the plate and then swiped third with Eloy Jimenez up for his seventh theft of the season. So then, Dewees was in prime position for Jimenez's ground-rule double to right-center.

"I'm usually really aggressive. Every chance I get to steal a base, I take advantage of it. Sometimes it works out in your favor, sometimes it doesn't. [Pitcher Angel Lezama] was a little slower to the plate, so I took advantage of that," he said. "[Speed] kind of determines the position I play on the field, where I bat in the lineup. I have the speed to bat leadoff, the speed to play center field, which is where I want to stay. And that's one thing I've always worked on, is keeping that and improving it as much as I possibly can."

In the following at-bat, Dewees showed off another big asset -- his power. The University of North Florida product smacked the pitch he saw from Lezama (1-2) for a two-run go-ahead homer in the fourth.

"I knew he threw four balls in a row [to the previous batter], so he was going to throw a fastball regardless," Dewees said. "I was going to make sure I got a really good swing on anything in the zone, around where I'm looking for, which is middle, middle-up and he happened to throw me one middle. I saw it well and put a good swing on it."

It didn't quite work out as well in the sixth. The left-handed hitter worked a walk off reliever Dylan Thompson, then saw an opportunity to go for more when the fourth ball popped off of catcher Hamlet Marte's mask.

"It went pretty high in the air and little bit towards our dugout, so I hustled down to first and tried for second. He just happened to make the good play, put a good throw, right on the money," Dewees said. "I talked to my coach after to see if there was anything wrong with it and he said, 'Absolutely not.' He loved the aggression; it was a bang-bang play."

Dewees also plated a run with a groundout to first in the seventh for his fourth multi-RBI night.

While the Florida native recently found himself in a 7-for-48 stretch, in the five games since the slump, Dewees has all three of his pro homers, seven RBIs and five stolen bases for the Emeralds.

"I've been doing my best to adjust from the college pitching where I was at in the Atlantic Sun Conference. Definitely, the competition is a lot better here, so I had to make a big adjustment, but I'm starting to come around and I'm starting to feel confident and get my swing back," he said. "I've been feeling good, my body's been holding up well for me, so hopefully I can start producing a little more and help them win a lot more games and maybe get a ring for the second half."