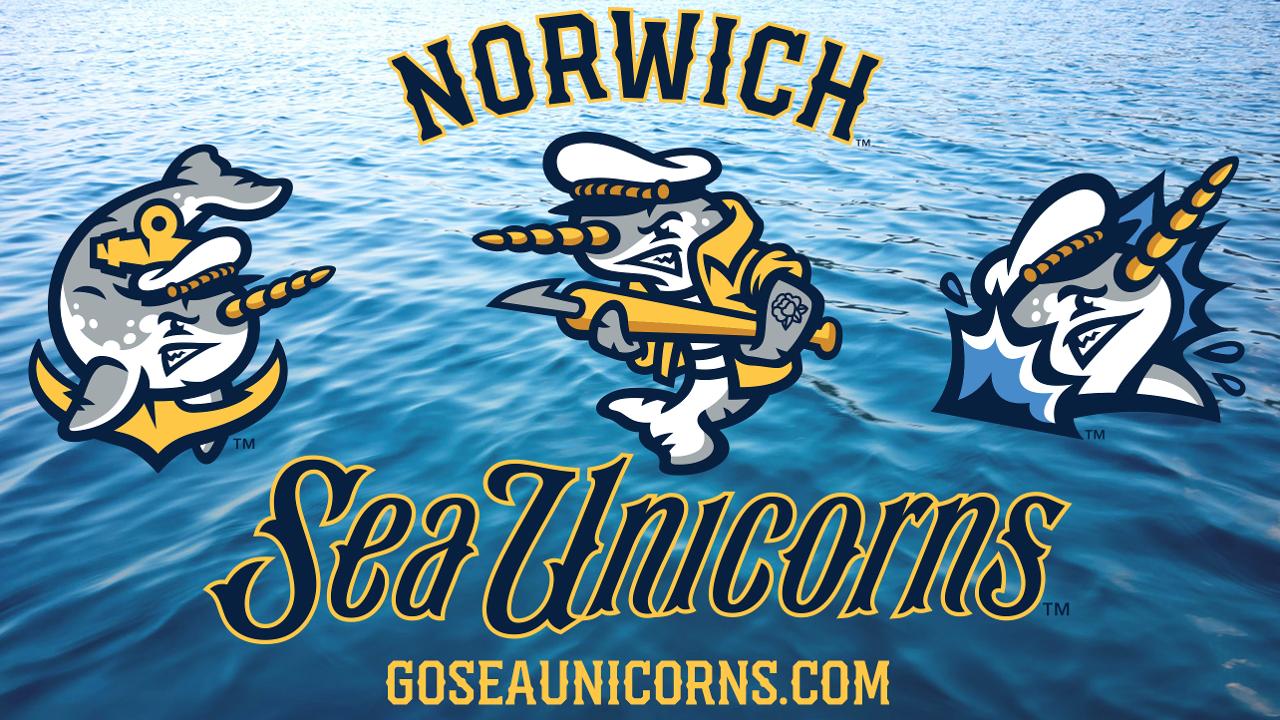 NORWICH, CT- The new Norwich Sea Unicorns (Detroit Tigers Single-A affiliate) unveiled their identity program at Kelly Middle School in Norwich on Thursday. The team was formerly known as the Connecticut Tigers. The new identity is part of a six-month creative overhaul to position Norwich baseball for years to come.

"We feel this new identity will bring Norwich and surrounding communities in closer, giving fans something that is uniquely ours," said Norwich Sea Unicorns General Manager Dave Schermerhorn. "We appreciate the support and input of our fans and partners to arrive at this point, with a brand that we can all be proud of. This project was a true labor of love for our entire staff, which in large part is made up of individuals from Norwich and surrounding communities".

The team name was selected after the team received more than 700 suggestions from fans in a month-long name-the-team suggestion process. The Sea Unicorns was chosen as it represents the nautical history of Norwich as well as the family-friendly entertainment and fun that Minor League Baseball is known for. It is a tribute to the legendary sea captains of Norwich's history as well as the tall tales they brought back of sea creatures encountered in their travels, both real and imagined.

The new Sea Unicorns primary logo features a tough-as-nails sea captain narwhal. The narwhal is known as "The Unicorn of the Sea". The primary mark features a rose tattoo in reference to Norwich's moniker as "The Rose City". Two secondary logos round out the logos unveiled. One features a sea unicorn breaching the water in a nod to the community's rich submarine history including a major naval submarine base located just minutes from Dodd Stadium. A second prominently features an anchor logo representing the rich nautical history of Norwich, where the team has set down its anchor as home. The "Sea Unicorns" lettering is a classic baseball script with nautical flair, while the "Norwich" type style can be seen on historic ships who anchored in the city.

The redesigned white home uniforms feature navy trim and showcase the team's "Sea Unicorns" lettering across the chest. The new solid navy home cap features the primary Sea Unicorn. On the road, the club will don traditional gray uniforms with "Norwich" displayed across the chest, and a navy and gold cap featuring a new anchor logo.

The Sea Unicorns look was brought to life at Brandiose in San Diego, where they make teams famous by celebrating their brand stories. Partners Jason and Casey invented the first glow-in-the-dark on-filed cap for the Casper Ghosts and first on-field rally cap for the Altoona Curve. They dreamed up top selling logos for the Hartford YardGoats, El Paso Chihuahuas and America's oldest baseball club, the Cincinnati Reds.

"Jason and Casey are tremendous partners with an excellent track record," said Schermerhorn. "We've had great success working together on the New England Lobster Rolls identity as well as other projects over the years. We knew they were the right people to deliver an impactful identity that would celebrate the history of our community".

The development process began last spring when Jason and Casey met in Norwich with fans, staff and community members to learn about the stories, history, and personality of Norwich. Brandiose developed the logos and uniforms, and is dreaming up enhancements for the 2020 fan experience and beyond.

"Norwich is one of the most storied cities in America," said Brandiose's Jason Klein. "Our goal was to capture the heart and soul of the community's rich nautical heritage and communicate it through the look and feel of the new identity, in a fun way you can only expect from Minor League Baseball."

Merchandise featuring the Sea Unicorns new look is available now at Dodd Stadium and online at www.GoSeaUnicorns.com. Season memberships to The Captain's Club are also on sale at the Dodd Stadium Box Office or by calling (860) 887-7962.