Gary Cathcart returns to Norwich to take the helm as Manager 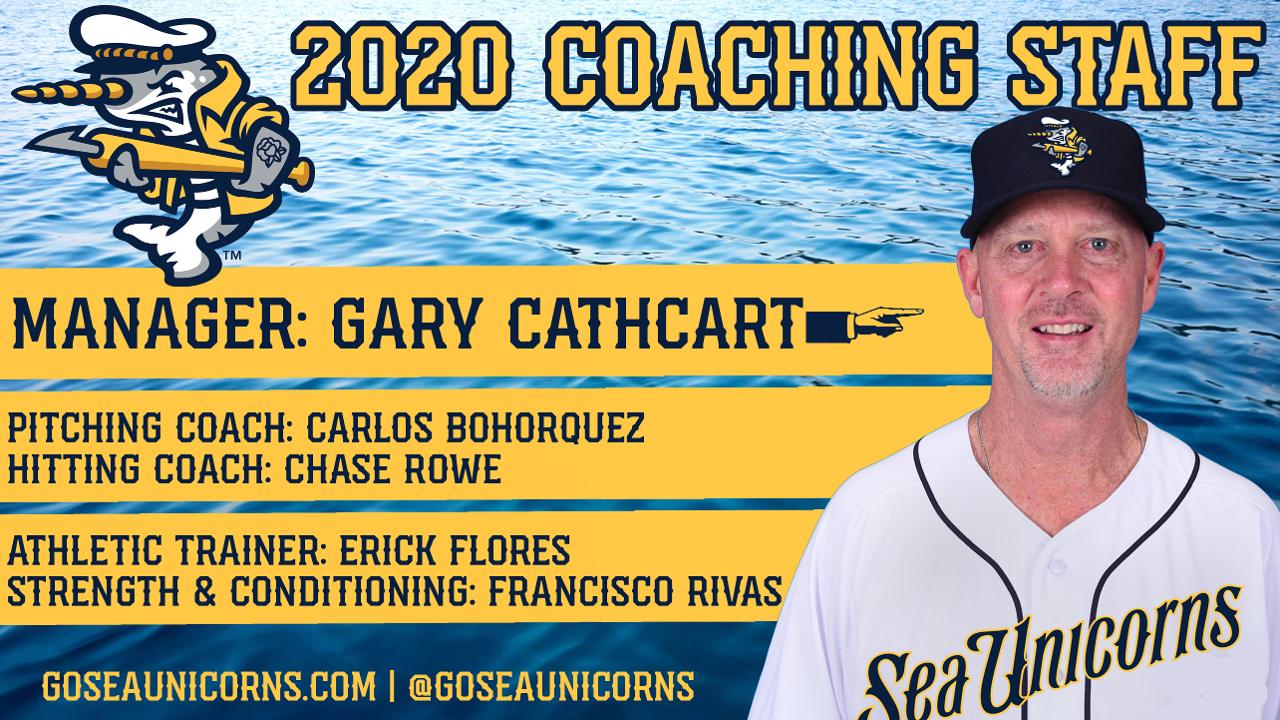 NORWICH, CT- The Norwich Sea Unicorns, in conjunction with the Detroit Tigers, announce the coaching staff for the 2020 season. Opening Night at Dodd Stadium is set for Sunday, June 21st with a special 7:05 pm gametime and fireworks after the game.

Gary Cathcart will return to Norwich as Manager, having served in the same role in 2018. Cathcart is in his third season with the Tigers organization after spending the two seasons as the Miami Marlins Field Coordinator in 2016 and 2017. He also managed in the New York-Penn League from 2011-2015 with the Auburn Doubledays (Washington Nationals affiliate) where he led the Doubledays to two straight Pinckney Division titles in 2011 and 2012. Prior to joining the Nationals, he spent seven seasons as the Hitting Coach or Manager in the Toronto Blue Jays organization, serving two seasons as Manager of the New Hampshire Fisher Cats (2008-2009), one season with Single A Lansing (2007) and one season with Single A Pulaski (2004). Cathcart was selected by the New York Yankees in the 33rd round of the 1984 amateur draft and played four seasons in the Yankees Minor League system, advancing as far as Triple A.

Returning to Norwich for his third season will be Pitching Coach Carlos Bohorquez. A native of Venezuela, Carlos enters his eleventh season in the Tigers organization. Bohorquez previously served as Pitching Coach for the Gulf Coast League Tigers and Venezuelan Summer League Tigers. Originally signed by the Cincinnati Reds as a non-drafted free agent in 1999, he spent three seasons as a third baseman before being converted to a pitcher and spending six more seasons in the organization.

Joining the Norwich staff for the first time will be Hitting Coach Chase Rowe. Rowe joins the Detroit Tigers organization for the first time after 11 seasons as Head Coach at La Roche University in Pittsburgh. In 11 seasons, Rowe guided the program to a 305-170 record and eight regular-seaon titles, seven conference tournament titles. The Redhawks won the 2016 Mideast Regional and advanced to the NCAA Division III College World Series. During his tenure Rowe was named AMCC Baseball Coach of the Year seven times. Rowe was also previously an Associate Scout for the Florida Marlins from 2009-2011 and for the Colorado Rockies from 2011-2019.

Rounding out the 2020 coaching staff will be Athletic Trainer Erick Flores and Strength & Conditioning Coach Francisco Rivas. Flores and Rivas each held the same role for the Gulf Coast League Tigers during the 2019 season.

The Norwich Sea Unicorns are the New York-Penn League affiliate of the Detroit Tigers at Dodd Stadium in Norwich, Connecticut. 2020 season memberships for "The Captains Club", mini plans, and team merchandise are now on sale! The 2020 season at Dodd Stadium kicks off on Sunday, June 21st at 7:05 pm with fireworks after the game. The front office and box office are open daily from 9 am to 5 pm Monday through Friday and can be accessed in person or by calling 860-887-7962.