After not hitting a round tripper in a month, first baseman from USC launches two homers to bring Raptors back from early deficit 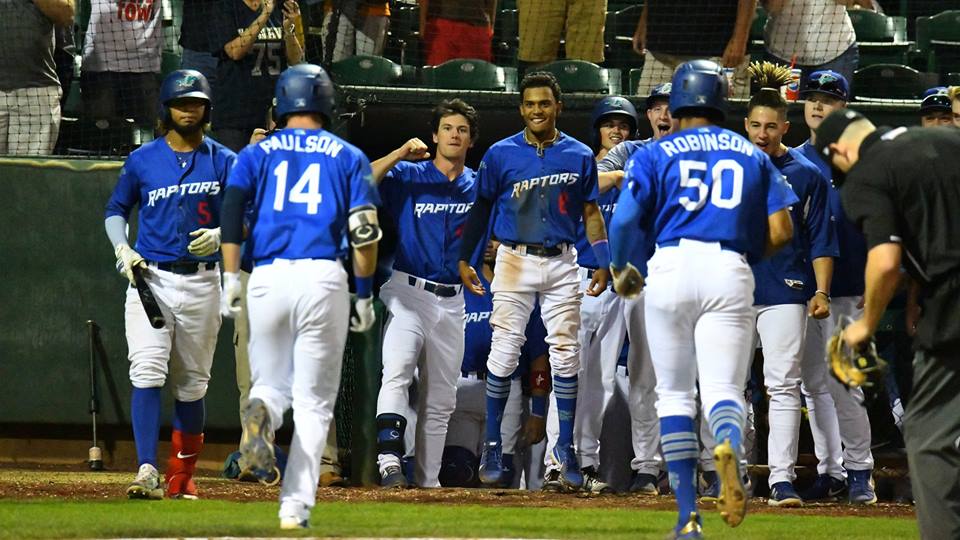 In need of a big hit to avoid a season-high fourth-consecutive loss, Dillon Paulson came through for the Ogden Raptors.

Paulson, who last hit a home run on August 1, hammered two blasts over Raptor Ridge to tie the game and then put Ogden ahead in the late innings as they knocked off the Grand Junction Rockies, 6-5.

With the Raptors trailing, 4-1, in the sixth, Jeremy Arocho singled to right with one out and advanced to second base when Daniel Robinson walked. The Rockies brought in left-handed reliever Will Tribucher to face Paulson, who had struck out and flied to center.

Paulson, the Pioneer League's walks leader, worked the count full before barreling up a Tribucher offering, sending it soaring out of the park to right-center to tie the game.

The Raptors went quietly in the seventh and saw the first two retired in the eighth, but Robinson pulled a single through the right side to again bring Paulson to the plate. This time, he took a ball and launched the second pitch from Aneudy Duarte high and deep to right-center for his second blast of the contest and a 6-4 advantage.

Grand Junction had taken a lead in the first as Will Golsan walked, moved to third on a Hunter Stovall single and scored on a groundout.

Robinson beat out an infield single in the bottom of the first and stole second, and with two down Ronny Brito singled to center to tie the game.

Golsan opened the fourth with a single and two batters later came across on a double off Raptor Ridge.

The Rockies opened their lead to three runs on a two-run homer in the fourth, but at that point the Raptors started a string of double plays to end innings that hasn't been matched this season.

After the home run in the fourth, the visitors put a runner on first with one out, but Ronny Brito started a 6-4-3 double play to end that frame.

In the fifth, Grand Junction loaded the bases with one out before Javier Guevara bounced up the middle and Jeremy Arocho fielded the ball, stepped on second and threw to first for the third out.

The Raptors went around the horn, 5-4-3, to close the sixth and after Justin Hagenman pitched a perfect seventh, Brito started another 6-4-3 to finish the eighth.

In the top of the ninth, after Ogden took the lead on the second Paulson round tripper, the Rockies got a solo home run from John Cresto, his second of the game, to pull within a run with one out. The next two hitters reached, putting the potential tying run in scoring position still with one out.

Luis Pasen got ahead of Stovall, 0-2, but the hitter hit a shot up the middle. Pasen deflected it and the ball was picked up by Arocho ranging behind second base. Arocho flipped to Moises Perez, who entered for the ninth when Brito was ejected in the bottom of the eighth. Perez received the throw, hit the bag for the second out, spun and fired to Paulson at first to end the game.

The Raptors win, combined with an Idaho Falls win over Orem, cut the Grand Junction lead over the Chukars to one game with four to play in the regular season.

Saturday night ended Ogden's regular-season home slate. After an off day Sunday, they head to Idaho Falls for a four-game series beginning Monday to close the regular season.